Making Plans and Making Progress: How the Federal Government Can Lead by Example

October 31, 2014 at 10:52 AM ET by Mike Boots
Twitter Facebook Email
Summary:
Under the President’s leadership, agencies have made significant progress in cutting carbon pollution, improving energy efficiency, and preparing for the impacts of climate change. 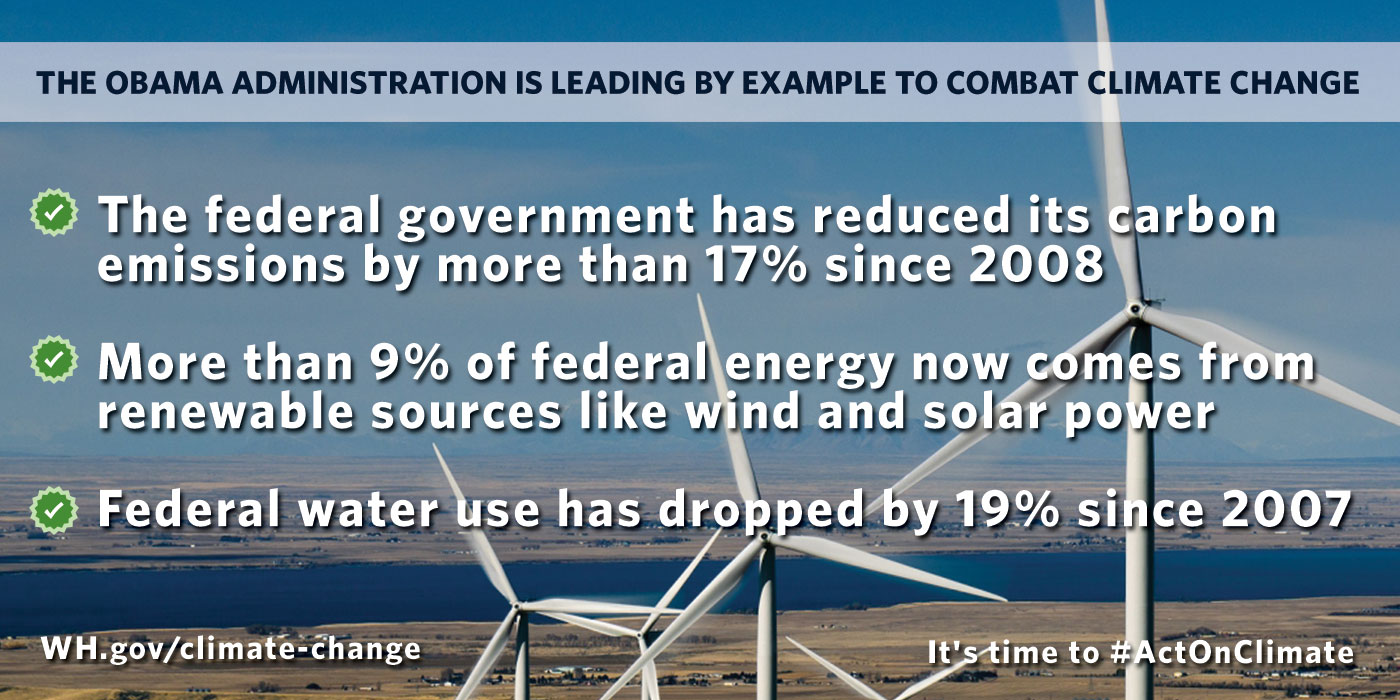 Five years ago this month, President Obama signed his Executive Order on Federal Leadership in Environmental, Energy, and Economic Performance, setting new energy, climate, and environmental targets for federal agencies. The targets are aggressive, but under the President’s leadership, agencies have made significant progress in cutting carbon pollution, improving energy efficiency, and preparing for the impacts of climate change.

Through this initiative, federal agencies have already reduced their greenhouse gas emissions by 17 percent – that’s the equivalent of taking 1.8 million cars off the road. And today, more than 9 percent of our energy comes from renewable sources, on our way to meeting a goal of 20 percent by 2020. We’ve also cut our potable water use by 19 percent, enough water to fill nearly 49,000 Olympic swimming pools.

This progress means we’re on track to meet the President’s goals. But with more than 360,000 buildings, 650,000 fleet vehicles, and $460 billion in annual purchasing power, the federal government is the largest energy consumer in the U.S. economy, so we can’t rest here.

That’s why, today, to coincide with the fifth anniversary of the Executive Order, federal agencies released new plans for reducing their greenhouse gas emissions and preparing for climate change impacts such as flooding, sea level rise, severe weather, and temperature extremes.

Agency sustainability plans outline steps they will take to continue their progress in saving taxpayer dollars, cutting carbon emissions and waste, and saving energy. And their climate change adaptation plans identify vulnerabilities to climate change impacts – like how increased flooding and rising sea levels could disrupt the Postal Service’s ability to provide mail service – and outline steps to address the vulnerabilities and incorporate climate change considerations into their decision-making going forward.

These plans will help the federal government keep up the kind of progress that will ensure we leave behind a planet that is not polluted and damaged and protect our ability to provide the vital services American communities depend on.

But that’s not all. Agencies have laid out their plans, and now we’re extending the challenge to the entire federal family.

In 2009, after President Obama signed his Executive Order, the White House launched the first GreenGov Challenge to seek suggestions for new climate and sustainability initiatives directly from federal employees. We heard from folks all over the country – over 14,000 employees joined in to share 5,000 ideas and cast 165,000 votes for the best ideas.

The suggestions helped guide the development of numerous new initiatives. For example, Tom in Washington, D.C. suggested that federal buildings become more bike-friendly. In response, a group of agencies collaborated to develop a guide for implementing a successful bicycle commuting program in the D.C. metro area. Adam in Boston suggested planting more drought-tolerant and native plant species. CEQ followed up by issuing guidance for federal landscapes that included a focus on these types of plants. And an employee at the Office of Personnel Management wanted to see solar panels installed on agency buildings. This year, we announced new solar panels on the White House and launched the Capital Solar Challenge, which will lead to solar panels being installed on federal buildings all over the District.

And now, we’re looking for more ideas to build on our success. Today, we’re launching the 2014 GreenGov Challenge.

Federal employees, we want to hear from you. Think about yourself and your co-workers, your workplace, the community where you live, and other federal agency facilities nearby. How can we do more to cut emissions and become more efficient both in our facilities and in our daily routine? How can we be more prepared for the impacts of climate change? How can the federal government be a better neighbor in communities across the country?

Specifically, we’re looking for suggestions in the following categories:

We’re ready to step up our game, but we need your input to do it. Be bold and creative. Think about where we can make the biggest impact. Talk with your teams and your colleagues. And make sure your ideas are heard.

We’ll be accepting idea submissions until December 5, so start thinking and sharing now.