November 3, 2014 at 12:42 PM ET by Valerie Jarrett
Twitter Facebook Email
Summary:
At Rhode Island College in Providence, President Obama delivered remarks on the importance of empowering women and girls in our economy. “When women succeed, America succeeds, and we need leaders who understand that,” he told the audience. 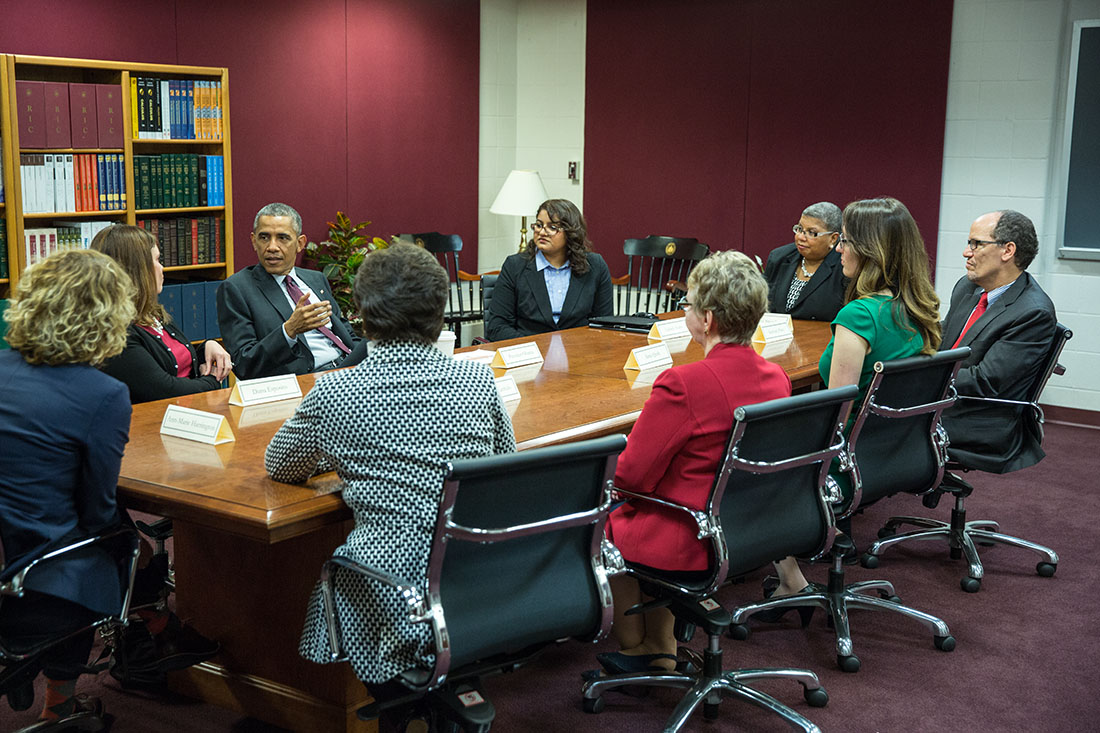 Last week, in Providence, President Obama delivered remarks on the importance of empowering women and girls in our economy. “When women succeed, America succeeds, and we need leaders who understand that,” he told the audience at Rhode Island College (RIC).

But before delivering those remarks, I had the pleasure of joining the President and Labor Secretary Tom Perez, for a roundtable with the President of Rhode Island College, local woman business owners, working moms, and an RIC student to discuss what we need to do to ensure that 21st century workplaces meet the needs of our 21st century workforce -- which is increasingly being led by women.

We heard from Ann-Marie Harrington at that roundtable, the President of Embolden, an online communications strategy company, who discussed what her business is doing to allow greater flexibility for employees. She offers her employees paid paternal leave and the ability to telework if needed, and points out that these policies have increased productivity. She supported Rhode Island’s new paid leave law, and helped communicate the need for a marketplace that more adequately adjusts to the needs of 21st century workers and families -- one that allows workers to flourish in both their roles as employees, and as parents.

Lisbeth Avalos, a junior at RIC, shared her story on Friday about the importance of mentorship. She was guided by her mentor toward a degree in bioengineering, which is a growth industry in great need of gender diversity. Lisbeth has now taken it upon herself to mentor younger students who may not otherwise consider careers in STEM.

But many of our workplaces have not caught up to that reality yet. Too many workplaces still have women facing unfair choices and outdated policies that hold them back. These policies are not only harmful to women in the workforce, but it also holds back their families, our communities, our businesses, and our entire economy. And as the President put it, “we have to do better – because women deserve better. Women deserve a day off to care for a sick child or sick parent without running into hardship.”

Rhode Island is actually one of just three states where paid family leave is the law of the land, and the President pointed out that more states should choose to follow their lead:

[W]ithout paid leave when a new baby arrives or an aging parent needs help, workers have to make painful decisions about whether they can afford to be there when their families need them the most. Many women can’t even get a paid day off to give birth to their child. It’s ridiculous. And dads should be able to be there, too. So let’s make this happen, for women and for men, and make our economy stronger.

Parents also need quality, affordable options for child care and early childhood development. In 31 states, decent child care costs more than in-state college tuition, which is a staggering and disqualifying reality facing millions of families. That’s why President Obama has set the goal of enrolling 6 million more children in high-quality preschool by the end of the decade to make America stronger.

We also discussed persistent wage gaps, and the important work being undertaken by businesses and a number of states around the country to raise the minimum wage.

The President underscored that “28 million Americans would benefit if we raised the minimum wage to $10.10 an hour,” and that “a majority of low-wage workers are women, and many have kids.” The hard truth facing many of these women is that someone working full-time on the minimum wage makes $14,500. If they’re a parent, that means they’re below the poverty line, and as the President made clear again on Friday: “No one who works full-time in America should have to raise their kids in poverty.”

Women in general are also still earning less than men, even when they’re doing the same work. And women of color face even greater wage gaps. As more and more women fill the role of primary breadwinners in more households, we cannot afford to pay them less. When we do -- entire families and communities suffer.

We also enjoyed hearing from Cheryl Snead, the CEO of Banneker, a defense contractor working on supply-chain and logistics out of Rhode Island. Cheryl pays her employees more than minimum wage and has a great recruitment and training program to attract women and students of color to the STEM fields. She provides paid leave, and has seen the positive impact in her company morale, productivity, and retention as her employees can rest assured that their family obligations are both valued and respected by their managers.

Thankfully, businesses both large and small are increasingly reflecting what we heard from Friday in Rhode Island; we must prioritize workplace flexibility, fair pay, affordable child care, paid leave and equality in our 21st century workplaces. Not only because it’s the right thing to do, but each of these companies is careful to underscore that it makes for good policy, higher productivity, and much greater return on staff investment.

Last week, in the New York Times DealBook, Tony Schwartz made the case for why more flexible workplace policies yield great benefits for both workers and companies, writing:

Working mothers I talk with consistently tell me their highest priorities are their children, their work, their husbands and their aging parents — and often in that order. They put care for themselves last on the list. Flexibility is critical if they’re going make themselves a higher priority. Meanwhile, companies need to make it matter less where and when people do their work, and focus instead on what value they create.

There is also the important component of loyalty to consider, as employees who feel supported and respected by their employers are much more likely to stay in a job longer, and go above and beyond in service to the supervisors and organization that backed them up when they needed it.

Two moms joined the President’s roundtable on Friday whose babies were born premature. They talked about the relief they felt when their employers gave them the flexibility they needed to care for their little ones, and manage the unique challenges they faced.

I often think back to a time while working for Mayor Richard Daley in Chicago, not long after having been promoted to serve as his Commissioner of Planning and Development. The Mayor had called a meeting with his cabinet and Susan Sher, who was the corporation counsel at the time, one of my dearest friends, and like me, a single mom. The meeting stretched toward the evening hours, and Susan and I found ourselves checking our watches and exchanging nervous glances. It wasn’t long before Mayor Daley interrupted the meeting to bluntly ask if we had somewhere more important we needed to be.

Unsure how to respond, I paused briefly before blurting out: "Susan and I both have second graders; their Halloween Parade starts in 20 minutes -- and it is 25 minutes away." The whole room braced for his response. But without a moment of hesitation, the Mayor leaned forward and replied, “Well then what are you doing here? You better get moving."

Working families represent the backbone of this country, and our businesses drive our economy. The American story is embedded in the strength of women like those described Friday by the President. He spoke about the women who are our quiet heroes in this country, “studying for finals after working a full shift, desperately searching for child care when the babysitter cancels at the last minute, using up every penny of their savings so they can afford to stay home with their new baby.”

These are the challenges facing our moms, our sisters, our daughters, and our coworkers, and we all must do more to back them up. The report released on Friday by the White House Council of Economic Advisers provides important perspective on the work that lies ahead, and will hopefully lay further groundwork for businesses and government at all levels to take action on behalf of women and working families.