Chart of the Week: The Progress We’ve Made on Ending Veteran Homelessness

November 11, 2014 at 11:33 AM ET by Tanya Somanader
Twitter Facebook Email
Summary:
Here’s a look at where we stand in our efforts to eliminate veteran homelessness.

Too many of those who have served our nation in uniform now sleep in our nation’s streets. As Americans, we must uphold our sacred trust with our veterans – and eliminating veteran homelessness is a start to honoring that obligation.

In 2009, President Obama committed his entire Administration to an ambitious plan of ending veteran homelessness. Much work remains to ensure every veteran has a home, but we have made significant progress in fulfilling this goal. Since 2010, the total number of homeless veterans has dropped by 33 percent. The number of the most vulnerable veterans, with no shelter whatsoever, has declined even more, by 43 percent. This means that on any given night, there are 25,000 fewer veterans on the streets or in shelters.

Here’s a look at where we stand in our efforts to eliminate veteran homelessness: 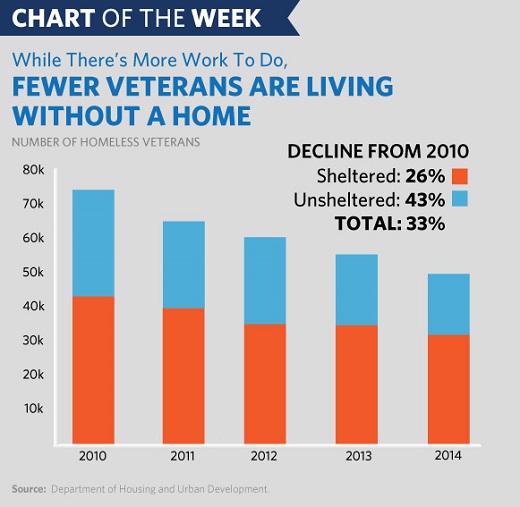 It will take everyone in our communities -- every business, every profession, every school, every American -- to ensure every veteran has the home and the opportunities they deserve. That is why the President has launched unprecedented partnerships with federal and local partners to increase access to permanent housing; to expand the range of health care available (including primary care, specialty care and mental health care); to increase employment opportunities and benefits for homeless and veterans who are at-risk for homelessness. Last year alone, we ensured that more than 240,000 homeless or at-risk veterans found help through homeless initiatives.

We must, we can, and we will do more to protect our nation’s veterans. The First Lady has challenged local leaders across the country to eradicate veteran homelessness in their communities by the end of 2015. Over 250 mayors, governors, and county executives have accepted that challenge and made a public commitment.

The Administration has also directed record funding to address this critical issue through housing vouchers. Since 2008, more than 73,000 veterans have been housed using these vouchers, more than 40 times as many veterans as were housed since the initiative began in the early 1990s.

Learn more about these initiatives and what the Obama administration is doing to honor and support those who served on the frontlines for our nation.