The Most Tested Among Us: Vice President Biden Pays Tribute to Our Nation's Veterans

November 11, 2014 at 7:44 PM ET by Kristen Bakotic
Twitter Facebook Email
Summary:
Speaking at the Arlington National Cemetery on behalf of a grateful nation, Vice President Joe Biden thanked America's veterans -- the most tested among us. 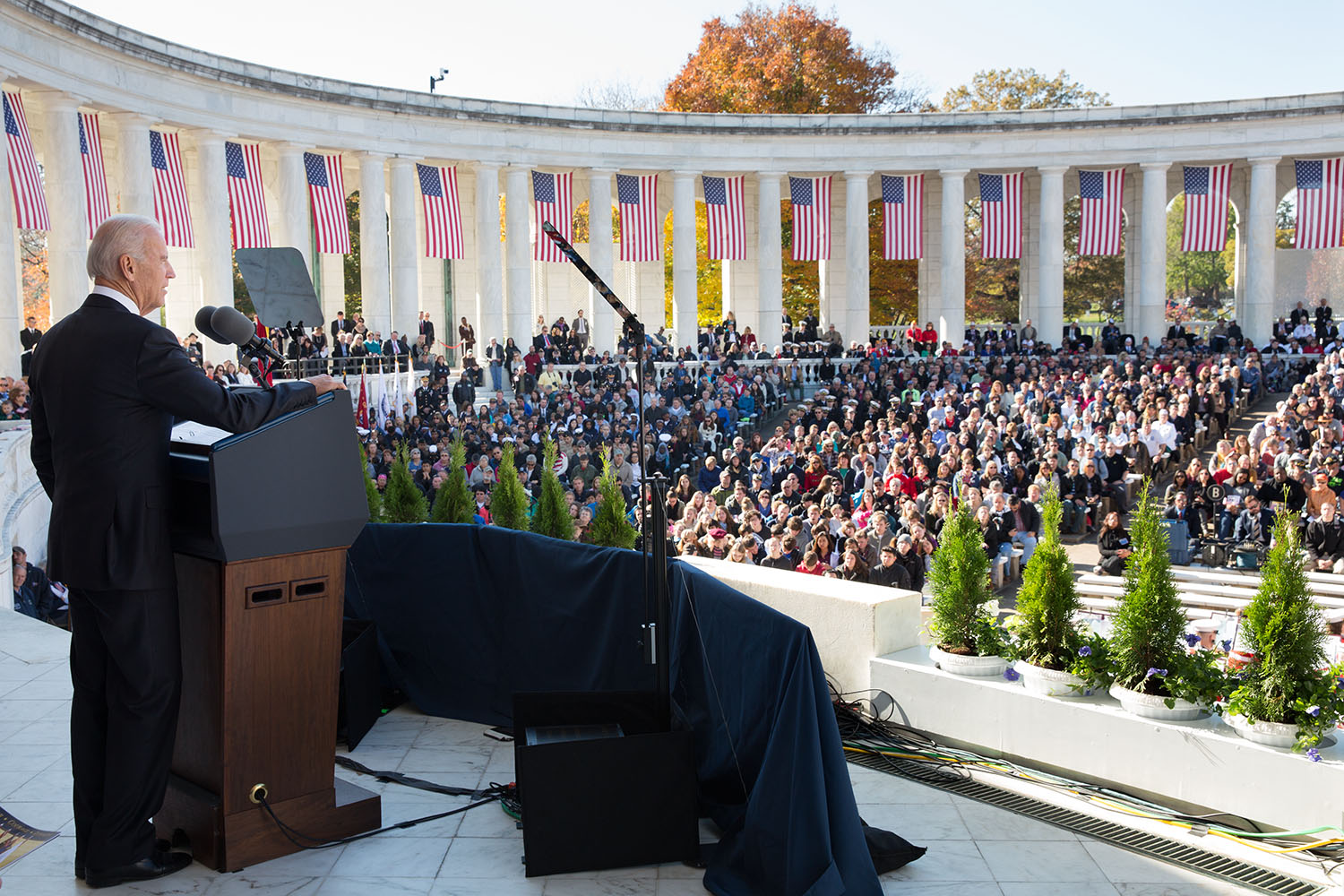 “As a nation, we have a lot of obligations -- to the young, to the old, to all the poor.  But there’s no obligation that is truly sacred other than the commitment to our veterans.”

In American author John Steinbeck’s novel East of Eden, a father describes to his son what it means to be a soldier: "A soldier is the most holy of all humans because he is the most tested."

"Nearly all men are afraid," he continues. "They don’t even know what causes their fear -- shadows, perplexities, dangers without names or numbers, fear of a faceless death. But if you can bring yourself to face not shadows but real death, described and recognizable, by bullet or sabre, arrow or lance, then you need never be afraid again."

Today, speaking at Arlington National Cemetery on behalf of a grateful nation, Vice President Joe Biden thanked America’s veterans – the most tested among us:

You are the veterans of America, the most trusted among us, and the most tested of all Americans. Collectively, you represent generations of soldiers, sailors, airmen, Marines and coastguardsmen who have served and sacrificed for all of us. You are not only the heart and soul, but you are the very spine of this nation. And as a nation, we pause today to thank more than 23 million surviving veterans who so bravely and faithfully protected our freedom. You gave and they gave, and you deserve our thanks.

We stand here today committed to show our respect, to honor and to recognize our responsibility to care for all our veterans, and for those who continue in harm’s way as I speak to you today.

Since September 11, 2001, 3.5 million men and women have volunteered to serve our nation on the front lines in Iraq and Afghanistan. Many have returned for multiple tours -- braving death so that we may live free. As the Vice President said, "Never before has America asked so much over such a sustained period of an all-volunteer force. And like so many generations before them, this generation of 9/11 warriors has paid an incredible price."

As of this morning, 6,703 American troops have died in Iraq and Afghanistan. 52,168 have been wounded. 19,650 are still deployed for combat in Afghanistan and 1,400 are providing security assistance in Iraq. Over the last two decades, the Vice President has visited troops all around the world including in areas of conflict -- in Bosnia, Kosovo, Iraq, and Afghanistan. No matter the region of the world, the intelligence, grit, resolve, and patriotism of America’s young service members and their families remains a palpable constant:

If only everyone in America could see what I’m seeing, taste what I’m tasting, understand what these warriors are doing.  And no one knows better than this audience that it’s not just the veteran that has been asked to sacrifice and serve, it’s his or her family -- his mother or father, children, especially the husbands and wives.

That exceptionalism is also on display through the many organizations that encourage veterans to serve in their communities like Team Red White and Blue, Team Rubicon, Mission Continues, the American Legion Auxiliary Call to Service Corps, and the countless organizations empowered by AmeriCorps along with our Congressionally Chartered Veteran Service Organizations.

"We have an obligation to care for and equip those who we send to war, and care for them and their families when they come home. It’s the only sacred obligation a government has, and we’re honor-bound to keep it."

They, along with the Secretary of Veterans Affairs Bob McDonald, members of the Veterans Day Committee, Veterans Affairs, Department of Defense leadership, and veteran warriors came to the White House, where an American flag finally reached the end of its journey.

Many people have been closely following the coast-to-coast flag relay of Team Red, White and Blue (Team RWB). On September 11, 2014, Team RWB started their "Old Glory Coast to Coast Relay" from San Francisco to demonstrate the strength and perseverance of our veterans.

Veteran runners and leaders in their communities proudly waved Old Glory as they spent 60 days running across the entire United States. That incredible journey comes to an end as they carry that Flag proudly to the steps of the White House on Veterans Day, presenting it to the Vice President. Though this morning it arrives at its final destination, it was all about the journey. The journey across the land through varied terrain, poor weather, fatigued muscles, and pain, the fortitude and grit of our Nations Veterans shine through yet again. The Vice President was honored to receive the flag on behalf of the President, the White House, and Americans across the country.

"Does the star spangled banner yet wave?" Frances Scott Key’s question – its implications and aspirations – has echoed through every perilous fight that our veterans have waged:

Does that star spangled banner yet wave over every forward position, ship, base, woman and man deployed in the service of our nation today? Does it wave on the front porches of families waiting out those deployments, silently praying for their warrior’s safe return? Does it wave over Walter Reed, Fort Belvoir, The Center for the Intrepid, the VA polytrauma centers, and so many other places where American warriors continue their march to recovery?

It waves in every police station, fire house, school, business and little league field where American veterans serve their community while standing ready in the Guard and the Reserve. It waves in the hearts of every American long after their time in uniform is through, and in the silent vigil above the row of white headstones here and "over there."

Ladies and gentlemen, Francis Scott Key’s questions persist to this day: "Does that star spangled banner yet wave o’er the land of the free and the home of the brave?" And thanks to all of you veterans, to the unbroken line of warriors who have answered the call, the answer, generation after generation, continues to be: Yes, now and forever.