The President Wraps Up Trip in Burma, Heads to Australia

November 15, 2014 at 12:18 PM ET by Tanya Somanader
Twitter Facebook Email
Summary:
After securing a historic agreement with China to reduce carbon pollution, the President traveled to Naypyitaw and Rangoon, Burma for the East Asia Summit, the U.S.-ASEAN Summit, and for a bilateral meeting with Burmese President Thein Sein. 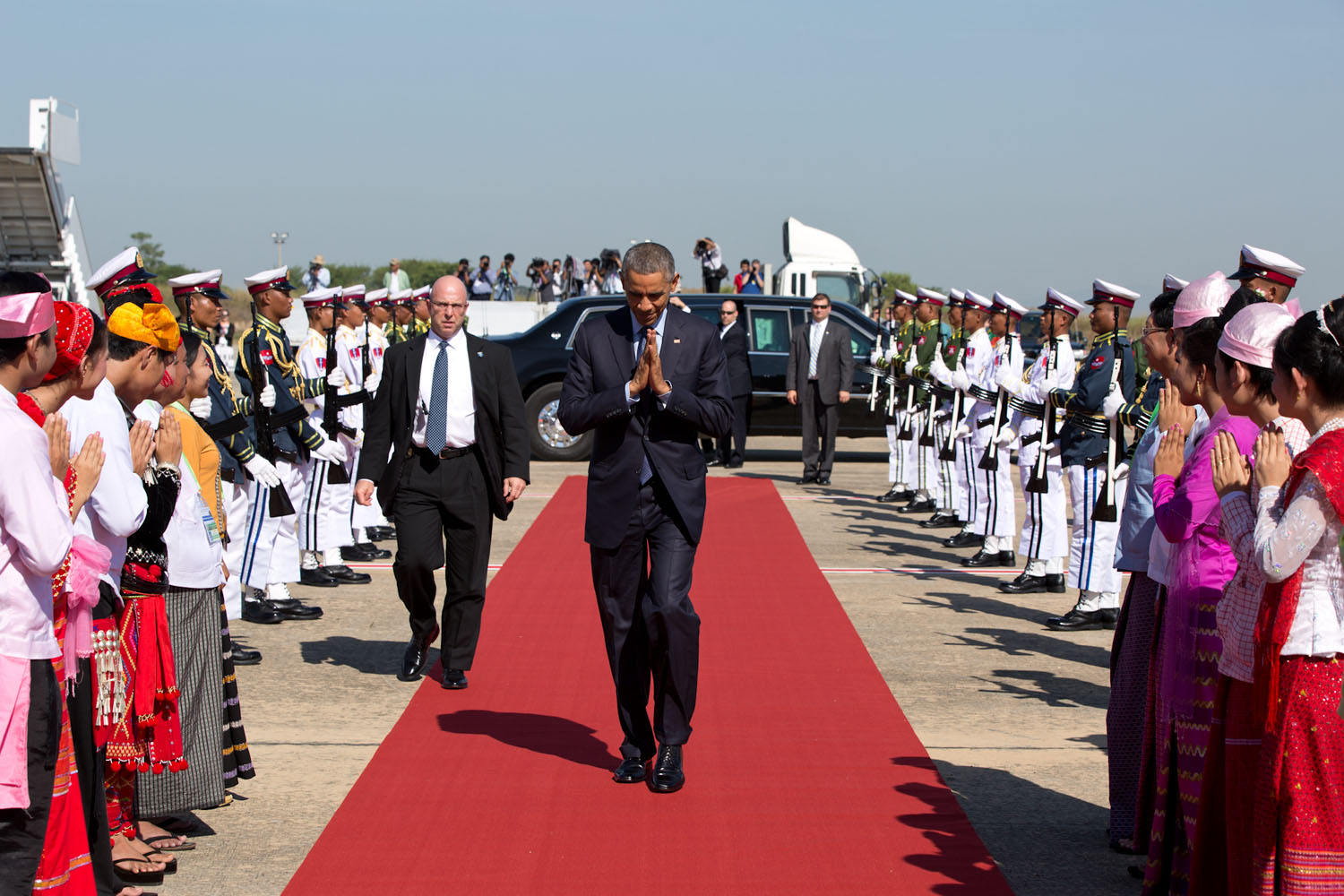 President Barack Obama walks towards Air Force One past honor guards and a group of representatives from Burmese ethnic groups before departing from Naypyitaw International Airport in Burma. November 14, 2014. (Official White House Photo by Pete Souza)

President Obama has spent the week traveling in China, Burma, and Australia to help further the U.S. rebalancing strategy and his firm belief that our economic ties to the Asia Pacific region are integral to America's economic growth.

After securing a historic agreement with China to reduce carbon pollution, the President traveled to Naypyitaw and Rangoon, Burma for the East Asia Summit, the U.S.-ASEAN Summit, and for a bilateral meeting with Burmese President Thein Sein.

Two years ago, President Obama became the first American president to visit this country. On this visit, both Presidents discussed the progress that Burma has made in the pursuit of a more open democracy and the work that's left to do:

In part because of President Sein’s leadership, the democratization process in Myanmar is real and we can point to specific changes that are making the difference.  Domestically, we’ve seen political prisoners that have been released.  We have seen an effort to end the practice of children being recruited into the army.  There is a genuine prospect for a ceasefire between some of the armed groups that have been fighting in Myanmar for decades.

But in our discussions, we recognized that this process is still incomplete. So, specifically, we had the opportunity to discuss elections that are scheduled for next year and the need for those elections to be fair, inclusive, transparent, and that the constitutional amendment process that has begun needs to reflect the ability of all voices in Myanmar’s society to participate.

The President then met with nobel laureate Daw Aung San Suu Kyi, the leader of Burma's National League for Democracy who has fought with courage, determination, and personal sacrifice in championig democracy and human rights in her country.

Joining her at her home, President Obama discussed how the U.S. can help facilitate Burma's democratic transition: "There is a need for a stronger rule of law, for elections that are free, fair and inclusive, and for continued constitutional changes that will move Burma more fully towards a cvilian government."

Implementing the major political and economic reforms that are necessary to keep Burma advancing toward democracy is going to take a great deal of political will and no small amount of determination.  And we, as friends of the Burmese people, are clear-eyed about the scale of the challenges that remain, and recognize that we cannot remain complacent.

I have absolute confidence that the United States will continue to support us with regard to the democratic transformation and that when Burma becomes a fully functioning democracy in accordance with the will of the people, we will be able to say that among those friends who enabled us to get there, the United States was among the first. 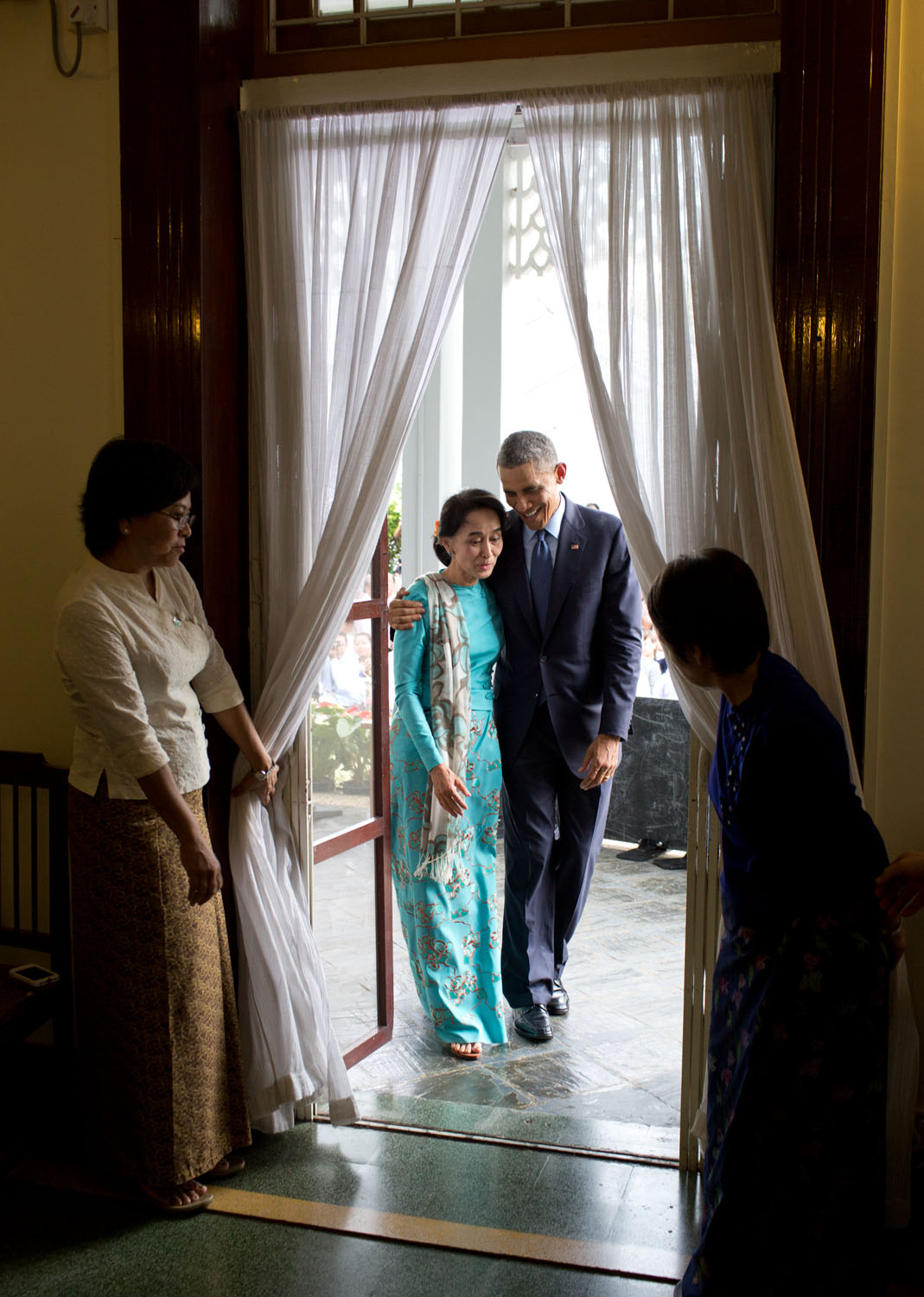 Dedicated to deepening American ties with the next generation of leaders in government, civil society, education, and entrepreneurship, the President also particpated in a Civil Society Roundtable as well as the Young Southeast Asian Leaders Initiative Town Hall at Yangon University in Rangoon.

Speaking to the young leaders gathered there, the President reiterated why the United States is so confident in the future strength of Southeast Asia:

We see young people of different nations and religions and ethnicities who are eager to come together and address all the challenges that are out there:  environmental protection; human rights; improving education; combating poverty; advocating for a greater role for women in business, in government and in society; increasing resilience in the face of natural disasters; spurring economic progress so more young people can follow in your footsteps and get a good education and have opportunity.

We see young leaders who embrace the diversity of this region not as a weakness, but as a strength, and who realize that even though we are all individually different and come from different traditions and different communities, we're stronger when we work together.

The President continued on from Burma to Brisbane, Australia, where he will complete his trip by participating in the G-20 Leaders Meeting.

On his first day there, he joined with every G-20 leader in pledging continued and intensified action to end the Ebola epidemic in West Africa. In pursuit of the global health security agenda, the international community has committed more than $1.5 billion to fight the epidemic while working hand-in-hand to bring an end to this devestating outbreak.

He also took the opportunity to address the students of the University of Queensland, one of the world's great institutions of science and teaching.

Your research led to the vaccine that protects women and girls around the world from cervical cancer.  Your innovations have transformed how we treat disease and how we unlock new discoveries. Your studies have warned the world about the urgent threat of climate change.  In fact, last year I even tweeted one of your studies to my 31 million followers on Twitter. I don’t think that’s quite as much as Lady Gaga, but it’s pretty good.

He outlined the importance of our rebalancing strategy in the Asia Pacific and the steps to "deepen our engagement using every element of American power -- diplomacy, military, economic, development, the power of our values and our ideas." These steps include:

Knowing that climate change is a universal issue that threatens countries across the globe, the President announced another important step the U.S. is taking. "We are going to contribute $3 billion to the Green Climate Fund so we can help developing nations deal with climate change," he said.

Along with the other nations that have pledged support, this gives us the opportunity to help vulnerable communities with an early-warning system, with stronger defenses against storm surges, climate-resilient infrastructure.  It allows us to help farmers plant more durable crops.  And it allows us to help developing countries break out of this false choice between development and pollution; let them leap-frog some of the dirty industries that powered our development; go straight to a clean-energy economy that allows them to grow, create jobs, and at the same time reduce their carbon pollution.

Before the President returns to the United States, he will deliver a major policy address at the G-20 Summit on Sunday. Learn more about the President's trip here. 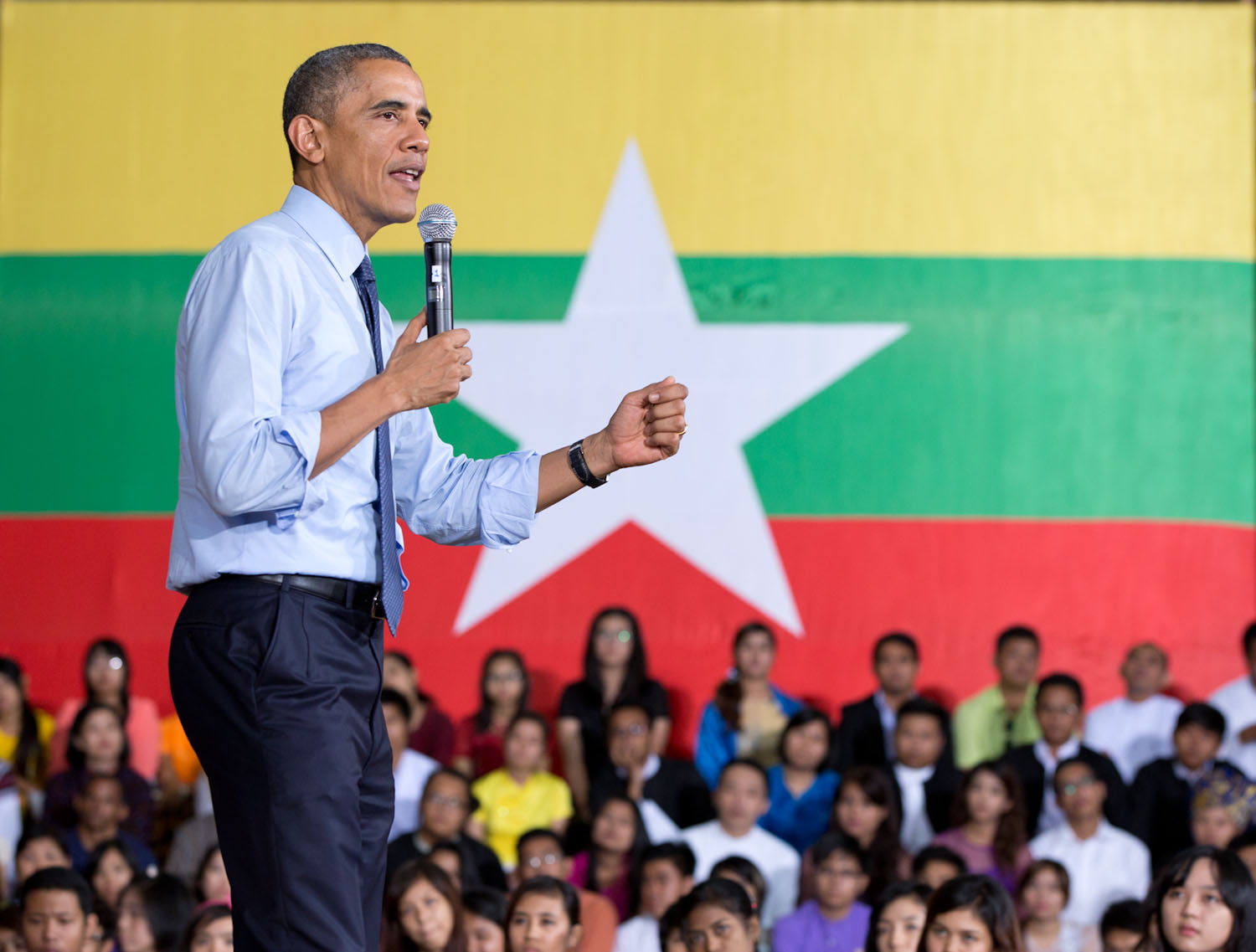