November 18, 2014 at 7:48 PM ET by David Hudson
Twitter Facebook Email
Summary:
President Obama meets with his national security and public health teams at the White House to discuss the latest news about the Ebola situation.

This morning, President Obama met with his national security and public health teams at the White House to discuss the latest news about Ebola and our ongoing response in West Africa.

"Some of the attention on the crisis has ebbed over the last several weeks, but the challenges remain," he said in remarks before the meeting. "We have seen most recently Dr. Martin Salia, a surgeon who contracted Ebola in Sierra Leone -- he was flown back to the United States, to the Nebraska facility, to try to get treated. Unfortunately, he was already in critical condition, and, sadly, passed away early Monday morning. So our thoughts and prayers are with his family."

The President made clear, however, that we have a great chance of curing Ebola in people that receive prompt diagnosis and treatment:

Of the eight patients who were treated promptly in the United States, all eight have recovered. They are Ebola free and they are back with their families.

And after the first incident of Ebola in Dallas, and the unfortunate passing of Mr. Duncan, we promptly acted based on some of the lessons that were learned from Dallas.  We’ve put in place new protocols for protective gear for our health workers. We ramped up our training and outreach for health workers. We’ve added screening for travelers to the United States. We’re funneling all these passengers into five airports. And we put in place rules for public health workers to monitor travelers for 21 days after they arrive here.

As we saw in New York with Dr. Craig Spencer -- one of the courageous health workers who has voluntarily traveled to the region to try to fight this disease -- our efforts to identify, isolate, and then treat Ebola patients can work. America has proven that it can handle the isolated cases that may occur here.

"We are nowhere near out of the woods yet in West Africa."

President Obama reiterated that as long as the Ebola outbreak continues in Liberia, Sierra Leone, and Guinea, Ebola will continue to be a major issue affecting the entire world:

We are nowhere near out of the woods yet in West Africa. The good news is, in parts of Liberia, our efforts, both civilian and military, are really paying dividends, and we are seeing the curve bending so that we are on track, with diligence, dealing with the hotspots that may still reemerge, to actually get a handle on that disease.

We’re still seeing an increase of cases in Sierra Leone, although our British counterparts are doing an excellent job working with us and the international community to coordinate the situation there. In Guinea, the numbers are lower than in Sierra Leone or Liberia, but they’re often in very remote areas that are hard to reach, and some of the international coordination still needs to improve.

The bottom line, though, is that we know how to treat this disease given that it has emerged as such a large, significant outbreak in these areas, and we recently saw some cases in Mali. It underscores how important it is to continue to push forward until we stamp out this disease entirely in that region. Until we do, there are threats of additional outbreaks. And given the nature of international travel, it means that everybody has some measure of risk.

The President also noted that while we've made great progress here at home in preparing our health care system, as well as with the creation of vaccines and treatments, there is still plenty of work left to do.

"Although we should feel optimistic about our capacity to solve the Ebola crisis, we cannot be complacent simply because the news attention on it has waned. We have to stay with it."

President Obama also discussed the Administration's emergency funding request to respond to Ebola both domestically and internationally -- and why Congress needs to approve the request as soon as possible:

The funding is going to help us strengthen our domestic health systems so that we can respond to any future cases that may arise in the United States wherever they might happen. It’s going to devote much-needed resources to sustain our efforts in West Africa. It will accelerate the testing and approval of Ebola vaccines and treatments. And it’s going to help vulnerable countries to, in the future, prevent, detect, and respond to outbreaks of various communicable diseases before they become epidemics.

And that, ultimately, is good for our public health. The more we can catch these things early where they begin, the less risks we have over the long term.  And as I’ve said before, in some ways, we are lucky Ebola is a very difficult disease to transmit. If we have a comparably lethal disease that is airborne, we have much bigger problems. So this gives us an opportunity to start putting in place the kind of public health detection infrastructure around the globe that is necessary should additional pandemics or epidemics or outbreaks arise.

"All this makes it necessary for Congress to act," the President said. "This is not a Democratic issue; it is not a Republican issue -- this is a basic issue of the health and safety of the American people. And so I hope that Congress is on the case on this issue before they leave." 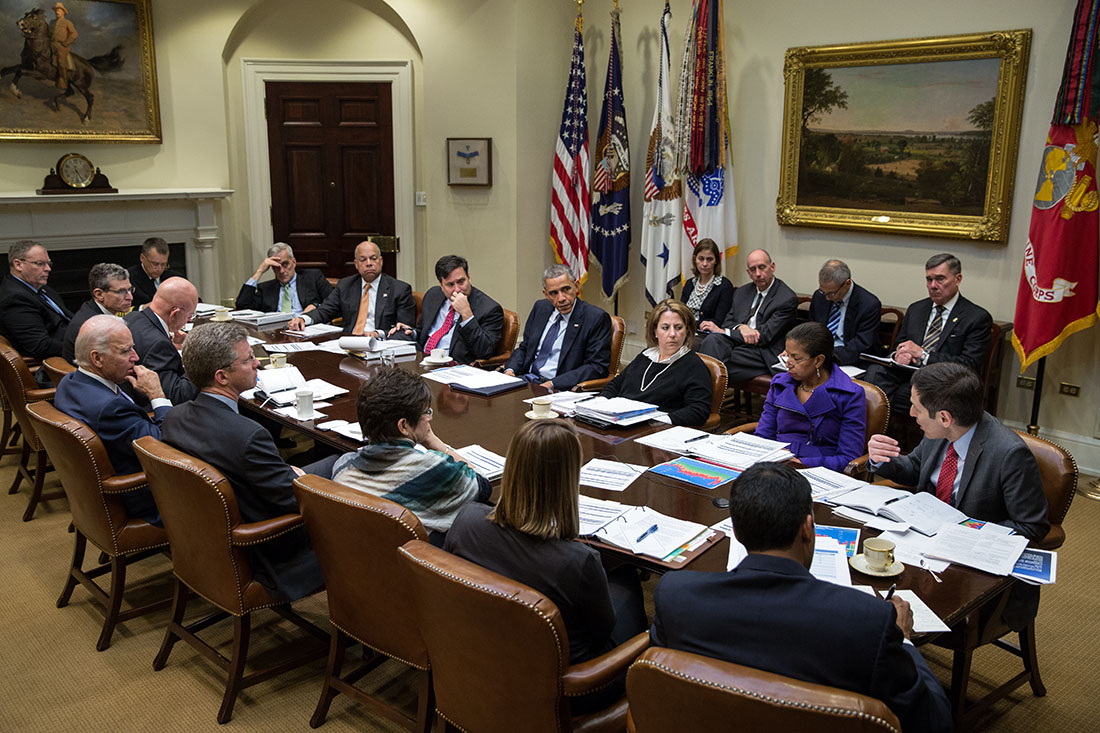 President Barack Obama meets with national security and public health teams to receive an update on the Ebola response, in the Roosevelt Room of the White House, Nov. 18, 2014. (Official White House Photo by Pete Souza)

In his remarks before the meeting, the President also addressed the horrific attacks that happened in Jerusalem on Tuesday morning:

We know that two attackers senselessly and brutally attacked innocent worshippers in a synagogue during their morning prayers. Obviously, we condemn in the strongest terms these attacks.  A number of people were wounded, and four people were killed, including three American citizens. So this is a tragedy for both nations, Israel as well as the United States.  And our hearts go out to the families who obviously are undergoing enormous grief right now.

Secretary Kerry has spoken to Prime Minister Netanyahu. President Abbas has strongly condemned the attacks. Tragically, this is not the first loss of life that we have seen in recent months. Too many Israelis have died. Too many Palestinians have died.  And at this difficult time, I think it’s important for both Palestinians and Israelis to try to work together to lower tensions and to reject violence.

The murderers for today’s outrageous acts represent the kind of extremism that threatens to bring all of the Middle East into the kind of spiral from which it’s very difficult to emerge. And we know how this violence can get worse over time. But we have to remind ourselves that the majority of Palestinians and Israelis overwhelmingly want peace and to be able to raise their families knowing they’re safe and secure. The United States wants to work with all parties involved to make that a reality, and to isolate the kind of extremists that are bringing about this terrible carnage.

Watch the President's remarks on the attacks in Jerusalem below: