Yesterday at the White House, Energy Secretary Ernie Moniz and I got to see American innovation in action, as Pacific Gas & Electric demonstrated their new plug-in hybrid bucket truck — a utility vehicle with emissions nearly 80% lower than a conventional truck.

Not only does PG&E’s plug-in hybrid utility vehicle run cleaner, it provides up to 120 kW of exportable power — meaning that the trucks can actually be used to shorten or end power outages by plugging their reserves into the grid.

This is the kind of innovation we need to take action on climate change — reducing emissions on the one hand and finding creative ways to boost community resilience on the other.

Tom Kuhn, president of the Edison Electric Institute, and Tony Earley, chairman and CEO of PG&E, joined us at the White House for the event.

PG&E isn’t the only utility company looking to lead on climate. Yesterday, more than 70 electric utility companies announced that they will devote at least 5 percent of their annual fleet budgets to purchasing plug-in electric vehicles — a total commitment of more than $50 million per year. Dozens more businesses, government agencies, schools, and non-profits also committed to install workplace charging stations for their employees.

In 2012, President Obama launched the EV Everywhere Grand Challenge, with the goal of making the United States the country to produce plug-in electric vehicles that are as affordable for the average American family as gasoline-powered vehicles. Since 2009, the cost of battery technology has already come down by more than 60 percent. Yesterday’s commitments will create even more demand for plug-in electric vehicles and bring the United States closer to meeting the President’s challenge.

The federal government is doing its part, too. The Department of Energy yesterday announced that they would work to support aggregated purchases of EVs and other advanced technology vehicles, maximizing customers’ buying power and increasing certainty for manufacturers. And we’ve substantially increased the number of electric vehicles and hybrid vehicles in the federal fleet, reducing carbon pollution and cutting fuel costs at the same time.

Taking action on climate change means working at all levels of government and across all sectors of the economy to reduce emissions, develop more clean energy, boost efficiency, and build resilience in American communities. The announcements made yesterday by American utility companies to buy more electric vehicles for their fleets show a real commitment to climate action — and to American innovation.

PG&E’s truck works great, by the way. I took a spin in the cherry-picker to see for myself: 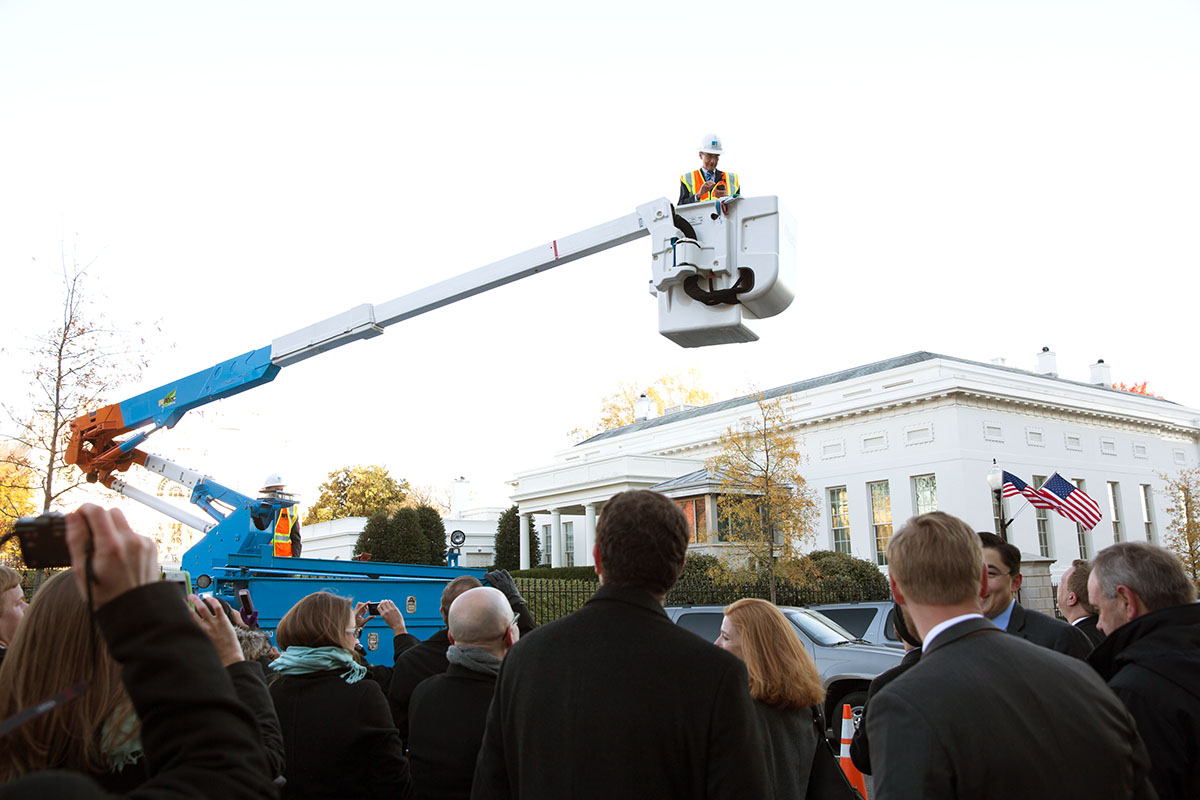