Earlier today, speaking to more than 100 school superintendents in the East Room of the White House, President Obama launched a new effort to assist school leaders in their transition to digital learning with the Future Ready Digital Pledge.

The Future Ready Digital Pledge is part of the President’s ConnectED initiative, which empowers teachers with the best technology and the training to make the most of it, and empowers students through individualized learning and rich, digital content. ConnectED also seeks to connect 99 percent of America’s students with high-speed broadband internet in their schools and libraries.

During his remarks, the President highlighted the significant gains our country has made in improving education during the last six years:

“Dropout rates are down. The graduation rate is the highest on record. More young people are earning college degrees than ever before.”

But he also noted that in a 21st century economy where the most valuable skill you can sell is knowledge -- and the capacity to learn new knowledge -- we still have work to do:

Right now, fewer than 40 percent of public schools have high-speed Internet in their classrooms -- less than half. That's not good, since we invented the Internet. That's not good. It means that in most American schools, teachers cannot use the cutting-edge software and programs that are available today. They literally don’t have the bandwidth.

And even in schools where there is high-speed Internet, so often there aren’t enough computers to go around, so only a small percentage of our classrooms have the one-to-one ratio of students to computers or tablets. And that means that, in too many schools, if a teacher wants to use the Internet for a lesson, then kids have to crowd around one desk to follow along, or they have to break up into groups and sequentially come in. 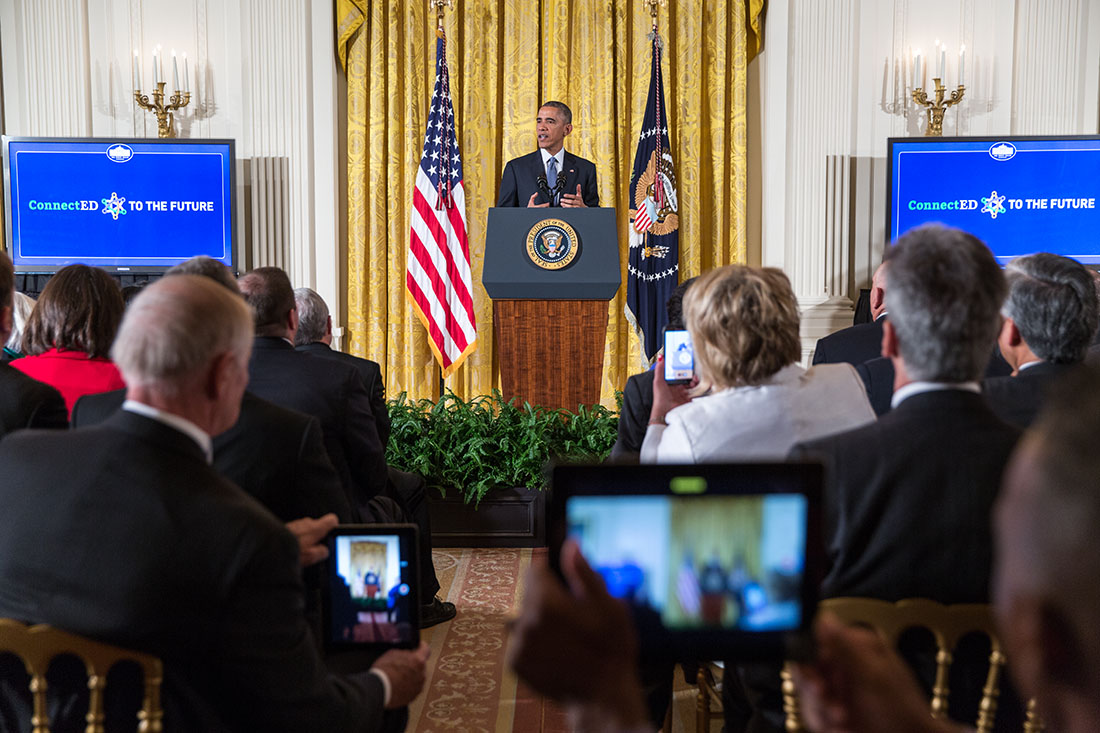 President Barack Obama delivers remarks during the "ConnectED to the Future" conference with superintendents and other educators from across the country who are leading their schools and districts in the transition to digital learning, in the East Room of the White House, Nov. 19, 2014. (Official White House Photo by Pete Souza)

More than 1,200 school superintendents have already signed the pledge, and have agreed to:

Together, they will reach approximately 10 million students across more than 16,000 schools across all 50 states and the District of Columbia.

“In a country where we expect free Wi-Fi with our coffee, the least we can do is expect that our schools are properly wired.”

Today’s “ConnectED to the Future” convening also featured new commitments from private and non-profit partners and from the U.S. Department of Education to support educators as they transition to digital learning. Learn more about today’s commitments here.

The President called the Future Ready Digital Pledge “a vision for digital learning in classrooms across America,” but cautioned that the pledge can’t stop with the superintendents:

Every kid needs every superintendent in America to sign this pledge -- and then follow through on the pledge.  Our kids need every school district to make these commitments. Every child -- whether they live in a big city, quiet suburb, the furthest reaches of rural America, poor districts, rich districts -- every child deserves a shot at a world-class education.

That’s the promise we make as a nation great. That's what makes our nation great -- this fundamental belief that no matter who you are, where you come from, what you look like, you can make it in this country if you work hard. You have access to the tools to achieve. If we keep working at this, that's a promise we can make real for this generation and generations to come.

Read the Future Ready Digital Pledge here, and find out more about the ConnectED initiative here.