November 20, 2014 at 2:55 PM ET by Stephen Spector
Twitter Facebook Email
Summary:
Welcome to your one-stop shop for everything you need to know about Vice President Biden and Dr. Jill Biden’s three-country, five-day visit to Morocco, Ukraine, and Turkey.

Welcome to your one-stop shop for everything you need to know about Vice President Biden and Dr. Jill Biden’s three-country, five-day visit to Morocco, Ukraine, and Turkey.

The Vice President wrapped up his three-country trip last week with a visit to Istanbul, Turkey.

The Vice President had an opportunity to meet individually with President Recep Tayyip Erdogan and Prime Minister Ahmet Davutoglu. At these meetings, the Vice President and the leaders discussed a range of important bilateral issues:

“And the one thing that is absolutely clear is that the depth of that friendship and the resolve of that partnership is as strong as it has ever been,” Vice President said after meeting with President Erdogan. “In spite of the fact that the world is facing and we collectively are facing some difficult problems right now.”

The Vice President also addressed the Atlantic Council Economic and Energy Summit, where he discussed energy security challenges and our strategic vision of a Europe that's whole, free, and at peace.

“True energy security in Europe is going to require some tough decisions,” the Vice President said before an audience of foreign leaders and business executives.

"True energy security in Europe is going to require some tough decisions." -VP Biden to the Atlantic Council pic.twitter.com/CFsXGoqVqS

Before departing for the Washington on Sunday, the Vice President met with His All Holiness Ecumenical Patriarch Bartholomew to discuss religious freedom and interfaith dialogue.

“This is a really fine man,” the Vice President said about the Patriarch.

"This is a really fine man," Vice President Biden said in Turkey today about meeting with His All Holiness Ecumenical Patriarch Bartholomew.

A photo posted by Vice President Joe Biden (@vp) on

Afterward, the Vice President and Dr. Biden toured the Süleymaniye Mosque, the largest in Istanbul.

Before departing Istanbul today, the VP and @DrBiden toured the Süleymaniye Mosque, the largest in the city → pic.twitter.com/40SeWPuuoT

November 21, 2014   Vice President Biden in Ukraine: “You are a remarkable people, the Ukrainian people”

The Vice President’s visit coincided with Ukraine’s first annual Day of Freedom and Dignity, which marks the one-year anniversary since protests and calls for government reform first began.

These issues underscored the Vice President’s message to the Ukrainian people: Keep working to build the democracy that Ukraine rightfully deserves.

Following his meetings with the President and Prime Minister, the Vice President reflected, “This is an important moment -- a chance to make good on the promise of 25 years ago when the Iron Curtain came down…You are a remarkable people, the Ukrainian people. You’re a brave people. And you’ve demonstrated that once again to the whole world.”

America’s commitment to Ukraine is personal. It’s grounded in the friendship between our people. pic.twitter.com/jwVETMRvYc

Before departing Kyiv, the Vice President had an opportunity to recognize Ukraine’s Day of Freedom and dignity by laying flowers at a memorial for those who were killed during protests this past year.

VP Biden lays flowers at a memorial for those who were killed during protests in Ukraine last year pic.twitter.com/0TQaDYy3xZ 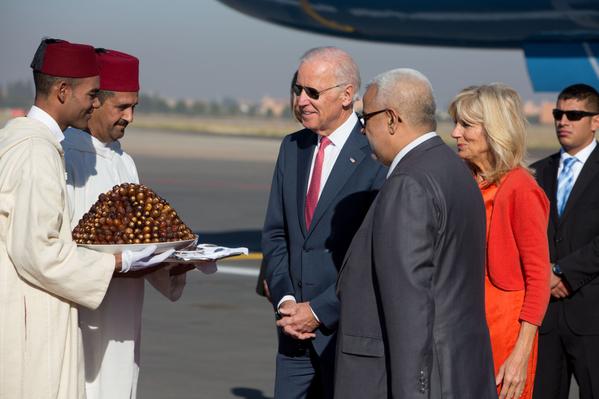 Morocco has a special place in the history and hearts of Americans because it was the first nation in the world to recognize the United States nearly 237 years ago. The Vice President's visit, the first by a sitting U.S. Vice President in decades, marked the latest chapter in a long and storied friendship.

After arriving, the Vice President met with His Majesty King Mohammed VI of Morocco. The two reaffirmed our countries' alliance and enduring friendship. The Vice President and King discussed a range of issues, including: 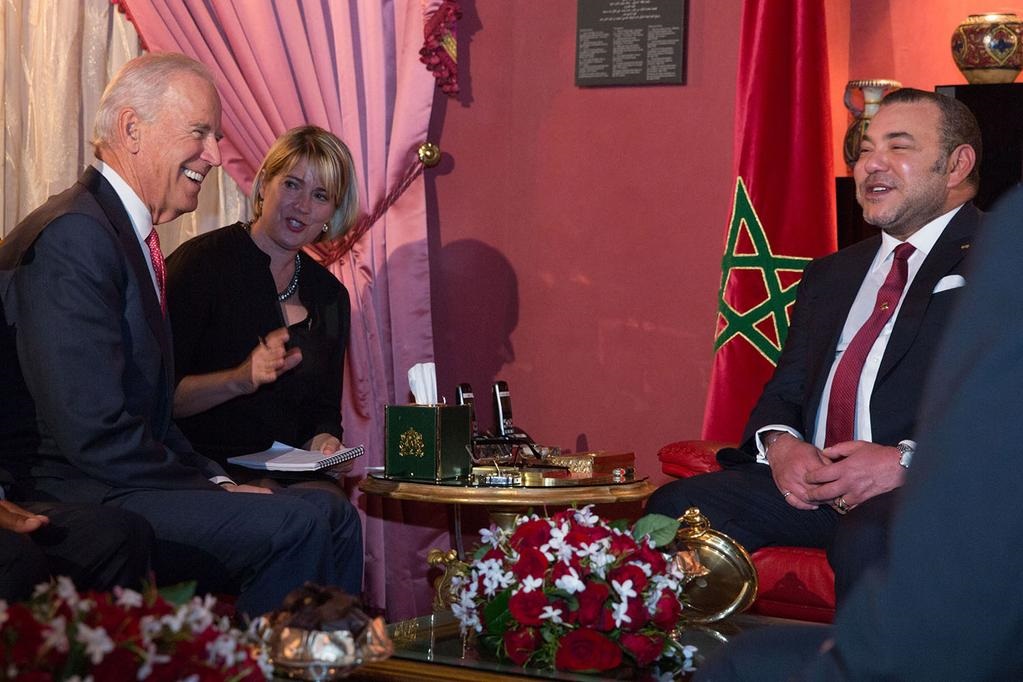 On Thursday, the Vice President addressed the Global Entrepreneurship Summit, an annual gathering of entrepreneurs and business, government, and thought leaders.

In his remarks, the Vice President announced that the U.S. government has committed to a bold new goal to expand economic opportunity by sparking $1 billion in new private investments for entrepreneurs worldwide. In fact, half of these investments will be generated by women and young entrepreneurs.

"When I travel the region and the entire world, I see young people with limitless promise to make not only their countries but the whole world better...That is the reality. That's the world we live in," Vice President Biden said. 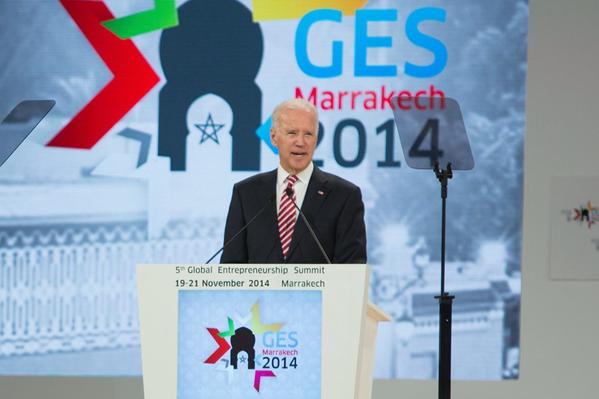 Next stop on the trip: Kyiv, Ukraine. Stay tuned for more updates from the road.

The summit is a way to bring together world leaders to identify how we can deepen ties between business leaders, foundations and social entrepreneurs in the United States and Muslim communities around the world. It’s also the Vice President’s second summit address. His first one was in Istanbul in 2011, where he told young entrepreneurs they "have a chance like no other generation of entrepreneurs to direct the world, to steer it, to bend the curve in the direction of progress, openness, humanity."

After his speech on Thursday, the Vice President will then meet with young leaders from around the world to discuss the importance of youth entrepreneurship.

Stay tuned for updates, photos, and videos from the road. For now, check out the schedule of the trip:

The Vice President will meet with King Mohammed VI of Morocco.

In the afternoon, the Vice President and Dr. Biden will depart Marrakech en route Kyiv, Ukraine.

Later in the evening, the Vice President will attend a working dinner with Prime Minister Ahmet Davutoglu.

In the morning, the Vice President will deliver remarks and participate in a moderated discussion with the Atlantic Council Energy Conference.

Afterwards, the Vice President will attend a meeting of the National Democratic Institute "Checks and Balances Networ."

Later, the Vice President will attend a working lunch with President Erdogan at the Beylerbeyi Palace.

In the morning, the Vice President will meet with His All Holiness Ecumenical Patriarch Bartholomew.

In the afternoon, the Vice President and Dr. Biden will depart Istanbul en route Washington, DC.