Chart of the Week: Our Border Is More Secure than It Has Been in Decades

November 21, 2014 at 4:01 PM ET by Tanya Somanader
Twitter Facebook Email
Summary:
Check out this chart to see how the number of people trying to cross our border illegally is at its lowest level since the 1970s.

In an address to the nation last night, President Obama announced new steps he’s taking to fix our broken immigration system and ensure nearly 5 million people will be held accountable and have the opportunity to play by the rules.

Using his executive authority, the President is making it easier for high-skilled immigrants and entrepreneurs to stay and contribute to the economy, as well as allowing certain undocumented immigrants who have lived in the U.S. for more than five years to get right by the law.

Alongside those steps, the President is also continuing to strengthen our border security. In fact, the Obama administration’s investment in border technology, manpower, and resources represents the most serious and sustained action to secure our border in our nation’s history.

As a result of the President’s focus on security over the past six years, illegal border crossings have been cut by more than half. Check out this chart to see how the number of people trying to cross our border illegally is at its lowest level since the 1970s: 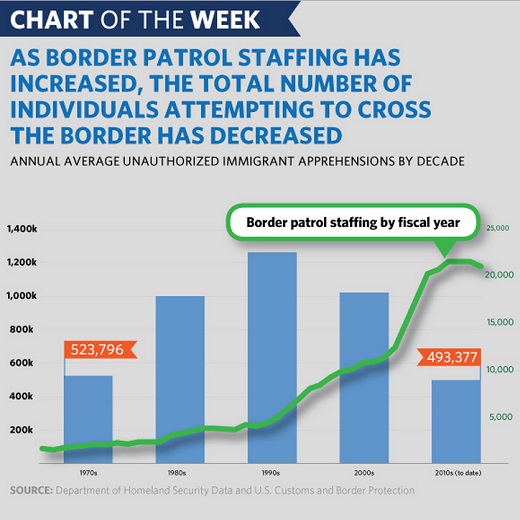 Now, using his executive authority, the President will take new steps to crack down on illegal immigration at the border by continuing to deploy more resources that strengthen enforcement and focusing on deporting undocumented immigrants who recently crossed the border.

“We’re going to keep focusing enforcement resources on actual threats to our security,” he said last night. “Felons, not families. Criminals, not children. Gang members, not a mom who’s working hard to provide for her kids. We’ll prioritize.”

The best way to fix our immigration system, however, is to pass comprehensive immigration reform. Last year, the Senate passed a bipartisan bill that would add 20,000 more border patrol agents to our border and address other significant issues with our system. But more than 500 days later, House Republicans continue to block the bill from a vote.

So the President will continue to do what he can to ensure that our borders are secure and that we live up to our heritage as a nation of laws and a nation of immigrants.