In the wake of Hurricane Sandy, seemingly simple tasks such as refueling your car, were incredibly difficult. Few tools existed to determine which gas stations had fuel and the power to pump that fuel.

To help address this problem, the U.S. Department of Energy (DOE) on Monday announced the launch of Lantern Live – a mobile app that allows users in disaster-affected areas to report on the status of local gas stations, find fuel, and easily look up power outage maps from local utilities. Lantern Live is part of the White House Innovation for Disaster Response and Recovery Initiative, and represents the ingenuity and ethos found across Initiative projects. An early beta version of Lantern Live was showcased at the White House Innovation for Disaster Response and Recovery Demo Day in July, and Lantern Live was included in the President’s briefing in advance of this year’s hurricane season. 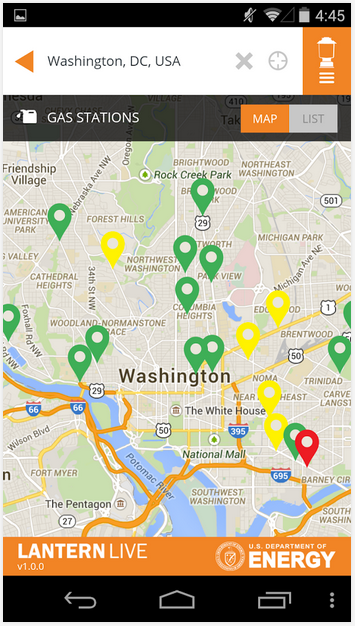 Lantern Live is one of the first crowdsourcing tools built by the Federal government. We’re thrilled about giving you a behind-the-scenes look at the process we used to develop the app.

When the stakes are high – as they are in a disaster area – tools need to be especially easy to use and directly meet survivors’ immediate needs. The development team brought the best “plays,” or principals, out of private sector software development and applied them to building Lantern Live. These plays, outlined in the U.S. Digital Services Playbook, include employing an agile development process, using a modern development stack, and most importantly, open-sourcing the tool for the community to take to the next level.

Agile development process
Under an agile development process, software developers prototype early and iterate often, continuously focusing on end-users and the tasks they need to accomplish. In this case, developers had to take into account that Lantern Live needs to be usable by someone in a stressful, disaster-impacted area. The Lantern Live development team will continue incorporating user feedback and observations into later updates to the app to improve the tool to better address on-the-ground needs.

Modern development stack
An agile approach only works if you have the tools for rapid prototyping and iteration, and a technology stack – a collection of technology components and services – that can easily scale. This is especially important for an app serving disaster-impacted citizens where usage can spike rapidly. The team identified a software development kit built on a Federally pre-approved  cloud environment. Using a modern development stack allowed the team to keep their focus on disaster-impacted citizens rather than technology building blocks.

Open source
The innovative, practical features in the Lantern Live mobile app have the potential to apply well beyond the energy sector for disaster resilience. For example, the code for the crowdsourcing of gas station status could be applied to grocery stores, pharmacies and other crucial post-disaster assets. The code for future releases of Lantern Live will be open-sourced, meaning that anyone can reuse this code in their own app. The Lantern Live development team is looking for collaborators in the private and public sectors to reuse this code. Please contact Lanternlivebeta@hq.doe.gov to learn more.

Brian Forde is the Senior Advisor for Mobile and Data Innovation at the White House Office of Science and Technology Policy.

Denice Ross is a Round 3 Presidential Innovation Fellow at the Energy Department and Lantern Live co-developer.

Derek Frempong is a Lantern Live co-developer and a Round 2 Presidential Innovation Fellow at the Energy Department.