In Case You Missed It: A Look at the Presidential Medal of Freedom Ceremony

November 24, 2014 at 3:14 PM ET by Kajal Singh
Twitter Facebook Email
Summary:
Speaking from the East Room this afternoon, President Obama awarded the Presidential Medal of Freedom to eighteen individuals who have devoted their lives to public service.

Speaking from the East Room this afternoon, President Obama awarded the Presidential Medal of Freedom to eighteen individuals who have devoted their lives to public service. 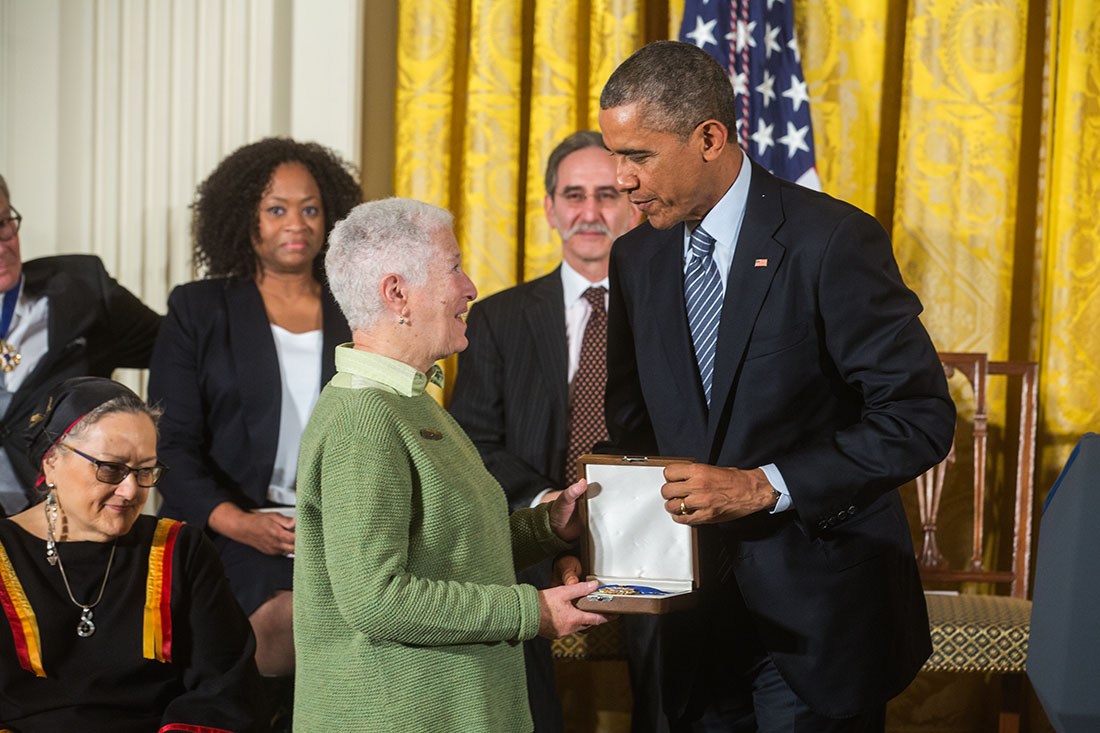 What is the Presidential Medal of Freedom?

The Presidential Medal of Freedom is the Nation’s highest civilian honor, presented to individuals who have made especially meritorious contributions to the security or national interests of the United States, to world peace, or to cultural or other significant public or private endeavors.

Who are the Recipients of this Year’s Presidential Medal of Freedom?

Take a look at the 2014 Presidential Medal of Honor recipients -- you may recognize some of them:

Ailey was a choreographer, dancer, and the founder of the Alvin Ailey American Dance Theater, which is renowned for its inspiring performances in 71 countries on 6 continents since 1958. Ailey’s work was groundbreaking in its exploration of the African American experience and the enrichment of the modern dance tradition, including his beloved American masterpiece Revelations. The Ailey organization, based in New York City, carries on his pioneering legacy with performances, training, educational, and community programs for people of all backgrounds.

Isabel Allende is a highly acclaimed author of 21 books that have sold 65 million copies in 35 languages. She has been recognized with numerous awards internationally. She received the prestigious National Literary Award in Chile, her country of origin, and is a member of the American Academy of Arts and Letters.

Tom Brokaw is one of America's most trusted and respected journalists. Mr. Brokaw served as anchor of NBC Nightly News from 1982 to 2004, and is currently a Special Correspondent for NBC News. For decades, Mr. Brokaw has reached millions of Americans in living rooms across the country to provide depth and analysis to historic moments as they unfold, from the fall of the Berlin Wall to the terrorist attacks of 9-11. His reporting has been recognized by the Edward R. Murrow Lifetime Achievement Award, two Alfred I. duPont-Columbia University Awards, eleven Emmys, and two Peabody awards. Mr. Brokaw previously served as anchor of NBC’s Today, and following the death of his close friend Tim Russert, Mr. Brokaw took over Meet the Press during the 2008 campaign season. He has written five books including The Greatest Generation, a title that gave name to those who served in World War II at home and abroad.

James Chaney, Andrew Goodman, and Michael Schwerner were civil rights activists and participants in “Freedom Summer,” an historic voter registration drive in 1964. As African Americans were systematically being blocked from voter rolls, Mr. Chaney, Mr. Goodman, and Mr. Schwerner joined hundreds of others working to register black voters in Mississippi. They were murdered at the outset of Freedom Summer. Their deaths shocked the nation and their efforts helped to inspire many of the landmark civil rights advancements that followed.

Mildred Dresselhaus is one of the most prominent physicists, materials scientists, and electrical engineers of her generation. A professor of physics and electrical engineering at MIT, she is best known for deepening our understanding of condensed matter systems and the atomic properties of carbon, which has contributed to major advances in electronics and materials research.

John Dingell is a lifelong public servant, the longest serving Member of Congress in American history, and one of the most influential legislators in history. Having represented Michigan in the House of Representatives since 1955, Mr. Dingell has fought for landmark pieces of legislation over the past six decades, from civil rights legislation in the 1960s, to legislation protecting our environment in the 1970s, to his persistent, determined fight for health care throughout his career, from Medicare to the Affordable Care Act. Mr. Dingell also served in the U.S. Army during World War II.

Ethel Kennedy has dedicated her life to advancing the cause of social justice, human rights, environmental protection, and poverty reduction by creating countless ripples of hope to effect change around the world. Over 45 years ago, she founded the Robert F. Kennedy Center for Justice and Human Rights, which is dedicated to realizing her husband’s dream of a more just and peaceful world. Ethel Kennedy was most recently honored for her longtime advocacy of environmental causes in neglected areas of Washington, D.C. with the dedication of the “Ethel Kennedy Bridge” over the Anacostia River.

Suzan Harjo is a writer, curator, and activist who has advocated for improving the lives of Native peoples throughout her career. As a member of the Carter Administration and as current president of the Morning Star Institute, she has been a key figure in many important Indian legislative battles, including the passage of the Native American Graves Protection and Repatriation Act and the American Indian Religious Freedom Act. Dr. Harjo is Cheyenne and Hodulgee Muscogee, and a citizen of the Cheyenne and Arapaho Tribes.

Abner Mikva is a dedicated public servant who has served with distinction in all three branches of government. He was a five-term Congressman from Illinois, Chief Judge of the United States Court of Appeals for the D.C. Circuit and White House Counsel for President Bill Clinton. He has also served as a law professor at Northwestern University, the University of Chicago, and the University of Illinois.

Patsy Takemoto Mink was a Congresswoman from Hawai'i, serving a total of 12 terms. She was born and raised on Maui, became the first Japanese American female attorney in Hawai'i, and served in the Hawai'i territorial and state legislatures beginning in 1956. In 1964, she became the first woman of color elected to Congress. She is best known for co-authoring and championing Title IX of the Education Amendments of 1972.

Edward R. Roybal was the first Mexican-American to be elected to the U.S. House of Representatives from California in nearly a century. In 1976, he founded the Congressional Hispanic Caucus and the National Association of Latino Elected and Appointed Officials, creating a national forum for Latino issues and opening doors for a new generation of Latino leaders.

Charles Sifford was a professional golfer who helped to desegregate the Professional Golfers’ Association, despite harassment and death threats. He started his life on the links as a caddy, and though he was formally excluded from the PGA for much of his career because of the color of his skin, he won six National Negro Opens. In 1960, he won his challenge over the PGA’s “Caucasian only” membership policy. He went on to win official PGA events and the PGA Seniors’ Championship. He was inducted in the World Golf Hall of Fame in 2004 and received an honorary doctor of laws degree from the University of St. Andrews in 2006.

Robert Solow is one of the most widely respected economists of the past sixty years. His research in the 1950s, 1960s, and 1970s transformed the field, laying the groundwork for much of modern economics. He continues to influence policy makers, demonstrating how smart investments, especially in new technology, can build broad-based prosperity, and he continues to actively participate in contemporary debates about inequality and economic growth. He is a Nobel laureate, winning the Nobel Memorial Prize in Economic Sciences in 1987.

Meryl Streep is one of the most widely known and acclaimed actors in history. Ms. Streep has captured our imaginations with her unparalleled ability to portray a wide range of roles and attract an audience that has only grown over time, portraying characters who embody the full range of the human experience. She holds the record for most Academy Award nominations of any actor in history.

Marlo Thomas is an award-winning actress, producer, best-selling author and social activist. Whether championing equality for girls and women, giving voice to the less fortunate, breaking barriers by portraying one of television’s first single working women on That Girl, or teaching children to be “Free to Be You and Me,” Thomas inspires us all to dream bigger and reach higher. Thomas serves as National Outreach Director for St. Jude Children's Research Hospital, a pediatric treatment and research facility focused on pediatric cancer and children's catastrophic diseases. The hospital was founded by her father, Danny Thomas, in 1962.

Stevie Wonder is one of the world’s most gifted singer-songwriters. Mr. Wonder has created a sound entirely his own, mixing rhythm and blues with genres ranging from rock and roll to reggae, and demonstrating his mastery of a range of instruments, styles, and themes. He is also a Kennedy Center Honoree, a member of the Rock and Roll Hall of Fame, and winner of 25 Grammys and an Academy Award.

In his remarks to the recipients and their families this afternoon, the President highlighted how each recipient's dedication to public service has made America stronger:

"This is one of my favorite events. Once a year, we set aside this event to celebrate people who have made America stronger, and wiser, and more humane, and more beautiful with our highest civilian honor -- the Presidential Medal of Freedom." 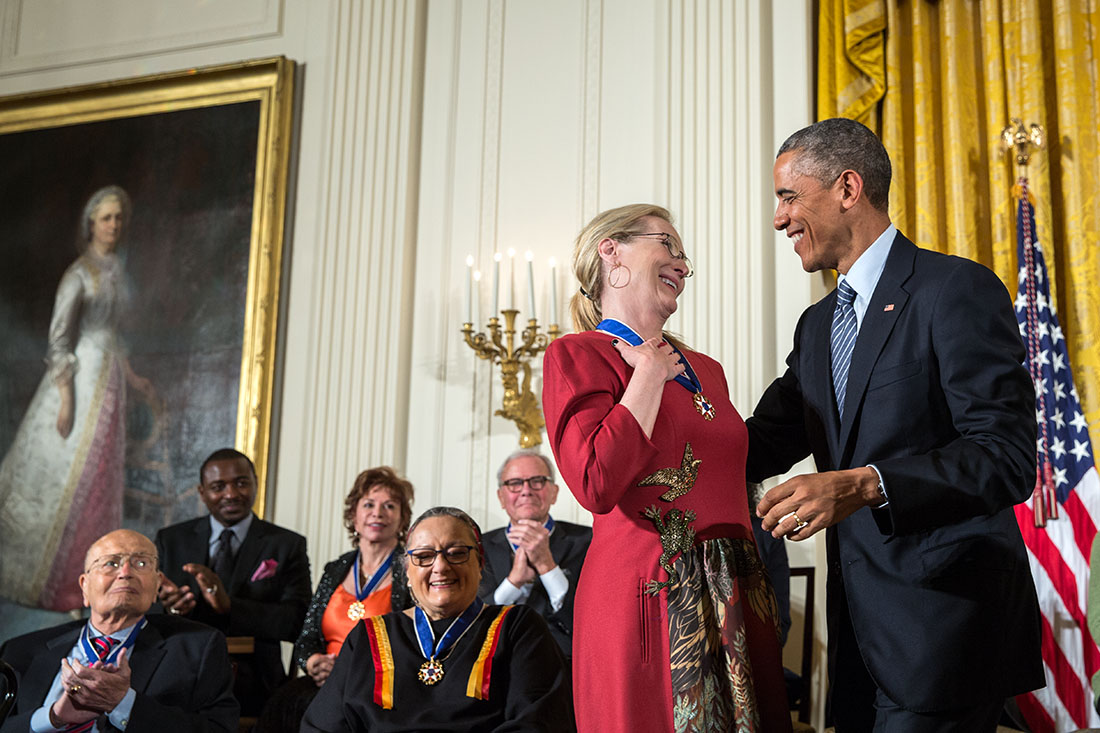 President Barack Obama presents the Presidential Medal of Freedom to actress Meryl Streep during a ceremony in the East Room of the White House, Nov. 24, 2014. (Official White House Photo by Pete Souza)

During the ceremony, President Obama even joked with a few of the recipients:

“I think this is like the third or fourth award Meryl’s gotten since I’ve been in office, and I’ve said it publicly: I love Meryl Streep. I love her. Her husband knows I love her. Michelle knows I love her. There’s nothing either of them can do about it.”

“And then there’s Stevie. Don't get Michelle talking about Stevie Wonder now. Early copies of Stevie Wonder’s classic album Talking Book had a simple message, written in Braille: “Here is my music. It is all I have to tell you how I feel. Know that your love keeps my love strong.” This is, by the way, the first album I ever bought with my own money. I was 10 years old, maybe 11, with my own cash. I didn't have a lot of it. And I listened to that -- that thing got so worn out, had all scratches. Young people, you won’t remember this, but you’d have albums. And they’d get scratched. “

“For more than half a century, in every single Congress, John introduced a bill for comprehensive health care. That is, until he didn’t have to do it anymore.”

At the end of the ceremony, the President described the gifts that these extraordinary individuals have given to us: