Chart of the Week: SHOP Marketplace Premiums Flat in 2015

November 24, 2014 at 3:34 PM ET by Matt Fiedler, Matt Siegler
Twitter Facebook Email
Summary:
Businesses seeking coverage on the SHOP Marketplace in 2015 will find that, on average across the 32 States where the Federal government operated the SHOP Marketplace in both 2014 and 2015, the premium for the lowest-cost bronze, silver, and gold policies has remained steady or declined slightly relative to 2014. 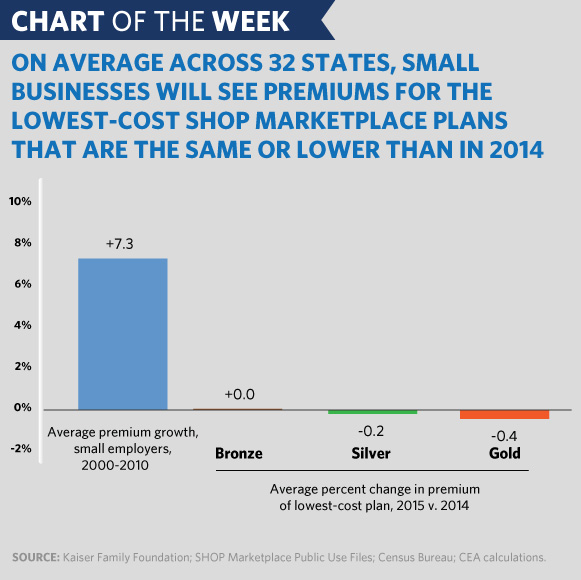 On November 15, the Health Insurance Marketplace opened for the 2015 enrollment season, giving current Marketplace enrollees a chance to compare their options for 2015 and others the chance to think about purchasing affordable coverage through the Marketplace for the first time. Individuals can find a plan that meets their needs and their budget at HealthCare.gov.

But November 15 also saw the beginning of online shopping through the Small Business Health Options Program (SHOP). Historically, small businesses have paid as much as 18 percent more than their larger competitors for the same coverage, reflecting high broker fees, administrative costs, and other factors.

SHOP tackles these problems by creating a competitive marketplace where small businesses can shop for coverage that meets their needs via a convenient online application. Many small businesses who purchase coverage through SHOP are also eligible for tax credits that cover up to 50 percent of premium costs. In addition, under the Affordable Care Act, small businesses cannot  be charged more for employing women, people with pre-existing conditions, or for operating in blue collar industries like construction or roofing.

The small increase in costs for low-cost plans on the SHOP Marketplace in 2015 is far below the 7.3 percent average annual growth in premiums for family coverage seen by small employers over the decade prior to the Affordable Care Act, as calculated using data from the Kaiser Family Foundation. While this historical growth rate is not precisely comparable to the SHOP Marketplace premium changes reported here since these changes are not market-wide enrollment-weighted averages, the wide gulf nevertheless helps to put this year’s changes in context.

The SHOP Marketplace is not the only setting in which health insurance premiums are growing unusually slowly. Recent analysis has found that premiums for low-cost plans on the individual Marketplaces will rise only modestly in 2015.  Data for 2014 released earlier this fall by the Kaiser Family Foundation found that the average premium for employer-based family coverage rose just 3 percent in 2014, tied for the smallest increase in record. This slow premium growth likely reflects in part the broader slowdown in health care cost growth in recent years, which is thanks in part to reforms in the Affordable Care Act. In the case of the SHOP Marketplace and the individual Marketplaces, the slow growth may also reflect the role of the Marketplaces themselves in facilitating competition.

Small business owners interested in finding a 2015 plan that meets the needs of their business and their employees -- and seeing whether they are eligible for a tax credit to help cover their premiums -- can explore their options at HealthCare.gov.

Need coverage? Go to HealthCare.gov to find a plan that works for you. Already covered? Commit to help someone else get covered at obamawhitehouse.archives.gov/get-covered.

Methodological note: This analysis uses publicly-available data on plan offerings on the SHOP Marketplaces in 2014 and 2015 for States where the Federal government operated the SHOP Marketplace in both years; these data are available for download from data.HealthCare.gov. For silver and gold plans, the premium analysis excludes five counties where plans were not available in 2014; for bronze plans, the analysis excludes a somewhat larger number of counties where plans were not available in one or both years.  Platinum plans were omitted from this analysis because they are not available in most areas. Averages are weighted by county population in 2013, as estimated by the Census Bureau.