Tonight, speaking from the White House Briefing Room, President Obama spoke to the American people about the announcement of the grand jury's decision in the death of Michael Brown in Ferguson, Missouri. The President joined Michael Brown’s parents in calling on anyone who protests to do so peacefully.

In his remarks, the President offered a path forward for our country, noting that the situation in Ferguson speaks to broader challenges we still face as a nation including the mistrust between law enforcement and communities of color. The President asked the nation to heed a grieving father’s words tonight and called on the country to seize this moment tomorrow as an opportunity for change.

He underscored that there are things we can do to help – from criminal justice reform to political engagement – and he’s instructed Attorney General Holder to work with cities across the country to build better relationships between communities and law enforcement.

The President's full remarks are below.

As you know, a few moments ago, the grand jury deliberating the death of Michael Brown issued its decision. It’s an outcome that, either way, was going to be subject of intense disagreement not only in Ferguson, but across America. So I want to just say a few words suggesting how we might move forward.

First and foremost, we are a nation built on the rule of law.  And so we need to accept that this decision was the grand jury’s to make. There are Americans who agree with it, and there are Americans who are deeply disappointed, even angry.  It’s an understandable reaction.  But I join Michael’s parents in asking anyone who protests this decision to do so peacefully. Let me repeat Michael’s father’s words:  “Hurting others or destroying property is not the answer.  No matter what the grand jury decides, I do not want my son’s death to be in vain. I want it to lead to incredible change, positive change, change that makes the St. Louis region better for everyone.”  Michael Brown’s parents have lost more than anyone. We should be honoring their wishes.

I also appeal to the law enforcement officials in Ferguson and the region to show care and restraint in managing peaceful protests that may occur. Understand, our police officers put their lives on the line for us every single day.  They’ve got a tough job to do to maintain public safety and hold accountable those who break the law. As they do their jobs in the coming days, they need to work with the community, not against the community, to distinguish the handful of people who may use the grand jury’s decision as an excuse for violence -- distinguish them from the vast majority who just want their voices heard around legitimate issues in terms of how communities and law enforcement interact.

Finally, we need to recognize that the situation in Ferguson speaks to broader challenges that we still face as a nation. The fact is, in too many parts of this country, a deep distrust exists between law enforcement and communities of color. Some of this is the result of the legacy of racial discrimination in this country. And this is tragic, because nobody needs good policing more than poor communities with higher crime rates. The good news is we know there are things we can do to help. And I’ve instructed Attorney General Holder to work with cities across the country to help build better relations between communities and law enforcement.

That means working with law enforcement officials to make sure their ranks are representative of the communities they serve. We know that makes a difference. It means working to train officials so that law enforcement conducts itself in a way that is fair to everybody. It means enlisting the community actively on what should be everybody’s goal, and that is to prevent crime.

And there are good people on all sides of this debate, as well as in both Republican and Democratic parties, that are interested not only in lifting up best practices -- because we know that there are communities who have been able to deal with this in an effective way -- but also who are interested in working with this administration and local and state officials to start tackling much-needed criminal justice reform.

So those should be the lessons that we draw from these tragic events. We need to recognize that this is not just an issue for Ferguson, this is an issue for America. We have made enormous progress in race relations over the course of the past several decades. I've witnessed that in my own life. And to deny that progress I think is to deny America’s capacity for change.

But what is also true is that there are still problems and communities of color aren't just making these problems up.  Separating that from this particular decision, there are issues in which the law too often feels as if it is being applied in discriminatory fashion. I don't think that's the norm. I don't think that's true for the majority of communities or the vast majority of law enforcement officials. But these are real issues.  And we have to lift them up and not deny them or try to tamp them down. What we need to do is to understand them and figure out how do we make more progress.  And that can be done.

Those of you who are watching tonight understand that there’s never an excuse for violence, particularly when there are a lot of people in goodwill out there who are willing to work on these issues.

On the other hand, those who are only interested in focusing on the violence and just want the problem to go away need to recognize that we do have work to do here, and we shouldn’t try to paper it over. Whenever we do that, the anger may momentarily subside, but over time, it builds up and America isn't everything that it could be. 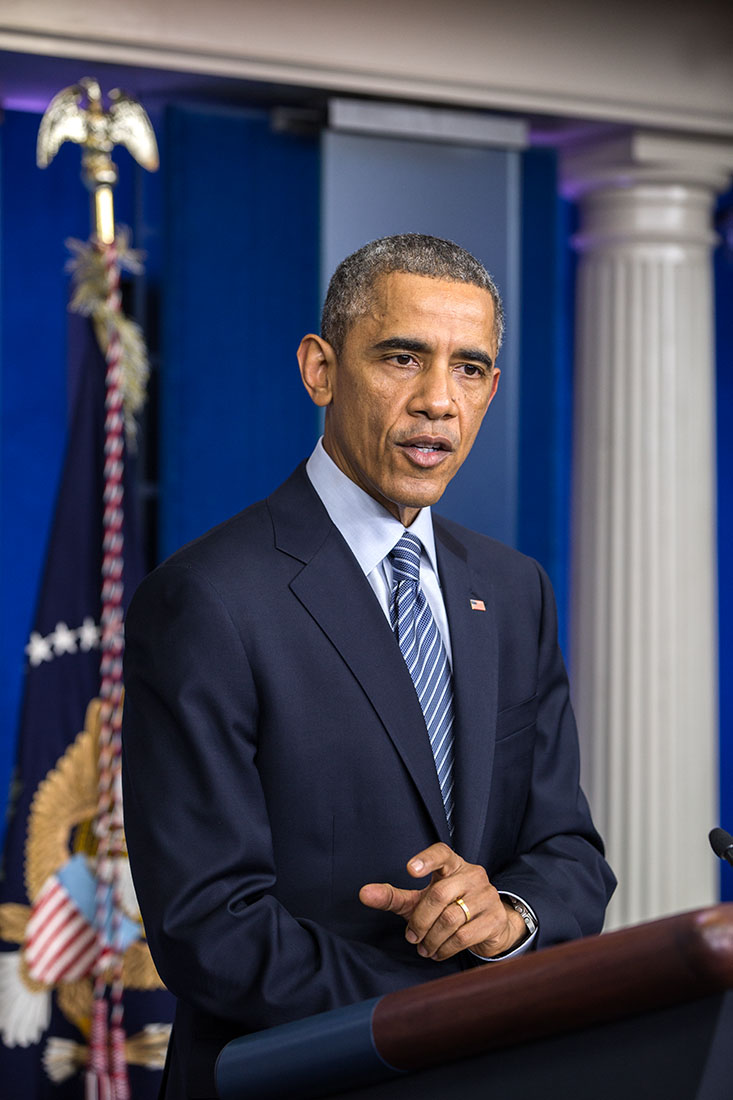