Second Estimate of GDP for the Third Quarter of 2014

Today’s upward revision affirms that economic growth in the third quarter was strong, consistent with a broad range of other indicators showing improvement in the labor market, increasing domestic energy security, and continued low health cost growth. Since the financial crisis, the U.S. economy has bounced back more strongly than most others around the world, and the recent data highlight that the United States is continuing to lead the global recovery. Nevertheless, there is more work to be done to boost growth in the United States and around the world. The President’s common-sense administrative actions on immigration—which CEA estimates will raise GDP by at least 0.4 percent over 10 years—will contribute to this effort, but only Congress can finish the job and make progress on other important steps like increased infrastructure investment.

1. Real gross domestic product (GDP) grew 3.9 percent at an annual rate in the third quarter of 2014, according to the second estimate from the Bureau of Economic Analysis. The solid growth recorded in each of the last two quarters suggests that the economy has bounced back strongly from the first-quarter decline in GDP, which largely reflected transitory factors like unusually severe winter weather and a sharp slowdown in inventory investment. In the third quarter, net exports made a large positive contribution to growth, while consumer spending and business investment remained positive contributors but grew at a somewhat slower pace than the previous quarter. Real gross domestic income (GDI), an alternative measure of the overall size of the economy, was up 4.5 percent in Q3. 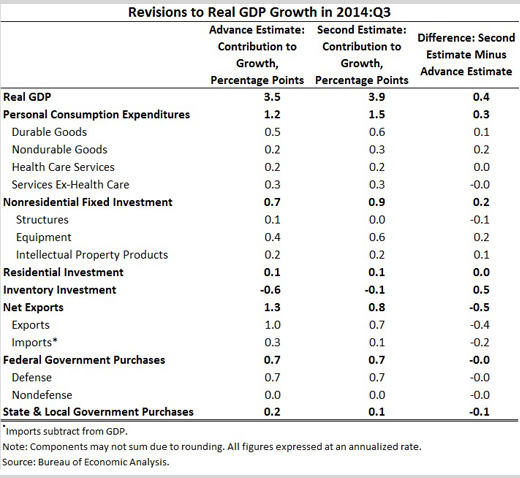 3. In the third quarter, gross national saving edged up to reach its highest level as a share of GDP since the end of 2006. Indeed, gross national saving as a fraction of GDP has increased 4.4 percentage points since its 2009 trough. This is mostly due to the reduction in the Federal budget deficit at the fastest pace since the demobilization after World War II, as a falling deficit increases national saving. At the same time, saving by businesses and households is much higher relative to the years immediately preceding the crisis. These changes put the U.S. economy in a more sustainable position for the future, including helping to reduce America’s borrowing from the rest of the world. 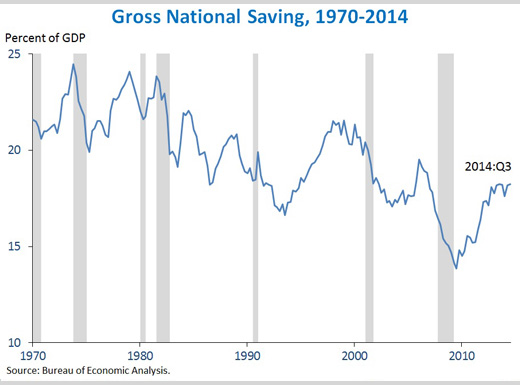 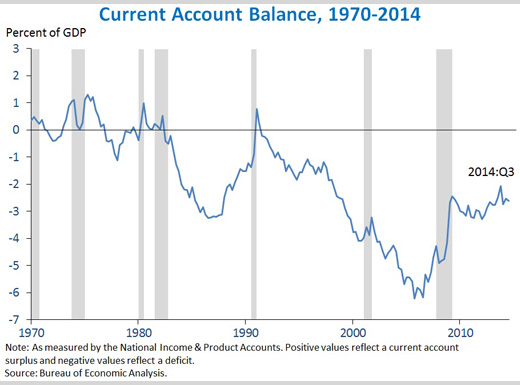 5. Real private domestic final purchases (PDFP)—the sum of consumption and fixed investment—is up 3.0 percent over the last four quarters, a faster four-quarter growth rate than real GDP. Real PDFP growth is generally a more stable and forward-looking indicator than real GDP because it excludes highly volatile components like inventory investment and net exports. In the first and second quarters of this year, GDP growth fluctuated widely, but PDFP was positive in both quarters, showing a less sharp pattern of decline and rebound. In the third quarter, PDFP grew a bit more slowly than GDP, but on balance, it has risen faster over the past year and continued its historical pattern of more steady growth. 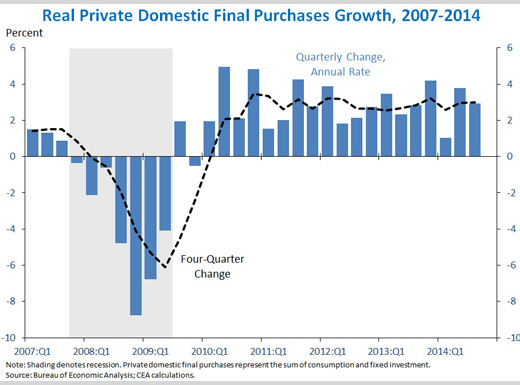