November 26, 2014 at 12:36 PM ET by Melissa Rogers and Ira Forman
Twitter Facebook Email
Summary:
On November 12 and 13, the Organization for Security and Co-operation in Europe (OSCE) hosted a conference to commemorate the 10th anniversary of the Berlin Conference on Anti-Semitism and the accompanying Berlin Declaration. 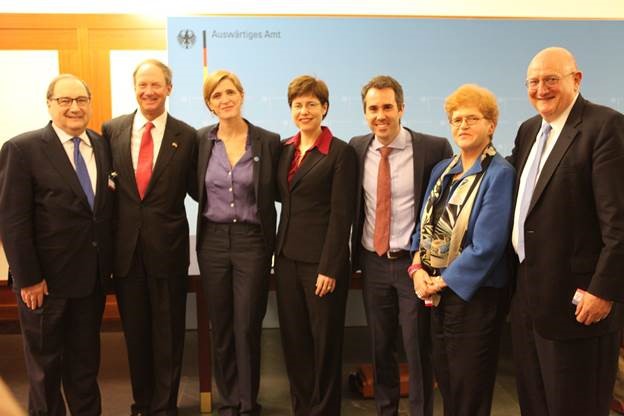 On November 12 and 13, the Organization for Security and Co-operation in Europe (OSCE) hosted a conference to commemorate the 10th anniversary of the Berlin Conference on Anti-Semitism and the accompanying Berlin Declaration. We were honored to serve as part of President Obama’s official delegation .

As President Obama has emphasized, anti-Semitism is a threat not only to the Jewish community but to the ideals we advance through our support for human rights and democratic governance around the world. The recent rise of anti-Semitism added to the importance and urgency of the gathering.

At the conference, US Ambassador to the United Nations Samantha Power spoke about the toll that anti-Semitism is taking on Jewish communities in Europe. In her remarks, she mentioned a series of brutal physical attacks against Jews in Europe in recent years, including an assault on a Jewish day school in Toulouse, in which a teacher and three children were killed; an attack on the Jewish museum in Brussels in May that killed four people; and the July firebombing in Wuppertal, of the Bergische Synagogue, which had originally been burned to the ground during Kristallnacht and had only been rebuilt in 2002.

While Ambassador Power praised leaders such as German Chancellor Merkel, French President Hollande and British Prime Minister Cameron for their speedy and strong responses to recent anti-Semitic attacks, she challenged us all to redouble our efforts to address anti-Semitism. “[I]t is critically important that OSCE states follow up on the [2004] Berlin Declaration this year, and rally around an updated plan of action that charts a concrete, unified path forward, which responds to the problems as we see them in 2014,” she said.

The Presidential Delegation met with a number of European Jewish leaders who gave personal testimony about these troubling trends. A German mother told a story about her young daughter seeing a man on the street dressed in Orthodox Jewish garb and fearing for his safety because of his clothing. A Belgian Jewish college student said that she is often reluctant to tell her peers that she is Jewish and fears that the building where the Jewish student association is located will be attacked. We will remember these people and their stories and work to ensure that they can live free of discrimination for who they are or how they worship.

An impressive and diverse delegation of American civil society leaders, led by Wade Henderson of the Leadership Conference of Civil Rights (LCCR), demonstrated the seriousness with which our nation confronts the issue of anti-Semitism. The delegation included representatives of the American Islamic Congress, the Anti-Defamation League, the Human Rights Campaign, Asian Americans Advancing Justice, the Sikh American Legal Defense and Education Fund and Human Rights First.

As public servants, as people of all faiths and backgrounds, we look forward to continuing to build coalitions across the United States and around the world to end the scourge of anti-Semitism and to promote respect for the dignity and equality of all people.

Melissa Rogers serves as Special Assistant to the President and Executive Director of the White House Office of Faith-Based and Neighborhood Partnerships. Ira Forman serves as Special Envoy to Monitor and Combat Anti-Semitism at the Department of State.