December 2, 2014 at 12:51 PM ET by David Hudson
Twitter Facebook Email
Summary:
Recent events in Ferguson, Missouri and around the country have grabbed the attention of the nation and the world, and have highlighted the importance of strong, collaborative relationships between local police and the communities that they protect. 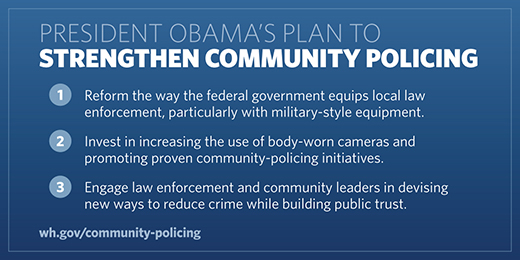 Recent events in Ferguson, Missouri and around the country have grabbed the attention of the nation and the world, and have highlighted the importance of strong, collaborative relationships between local police and the communities that they protect.

The Administration announced new steps we’re taking to strengthen the relationships between law enforcement agencies and the communities they are obligated to protect and serve, including:

Get more details about these new actions below.

Increasing the use of body worn cameras, and improving community policing

The President has proposed a three-year, $263 million investment package that will:

Part of the proposal is a new Body Worn Camera Partnership Program, which would provide a 50 percent match to states and localities that purchase body worn cameras and requisite storage. In fact, the proposed $75 million, three-year investment could help purchase 50,000 body worn cameras.

As noted in a recent report released by Community Oriented Policing Services (COPS) and the Police Executive Research Forum (PERF), evidence shows that body worn cameras help strengthen accountability and transparency, and that officers and civilians both act in a more positive manner when they're aware that a camera is present.

The task force – which will include law enforcement representatives and community leaders, among others – has a threefold purpose:

In August, the President ordered a review of federal funding and programs that help equip state and local law enforcement agencies (LEAs). Over the course of the review, the White House explored whether existing federal programs:

The final report, released today, finds inconsistencies in how these federal programs are structured, implemented, and audited. The report also identifies four areas of further focus that could help ensure that these programs help maximize the safety and security of both police officers and their communities:

In light of this review, President Obama is planning to issue an Executive Order directing relevant agencies to work together and with law enforcement and civil rights and civil liberties organizations to develop specific recommendations within four months.