December 2, 2014 at 6:46 PM ET by N. Nina Ahmad
Twitter Facebook Email
Summary:
Many may not be aware of the harsh conditions that beauty salon and domestic care workers face on a daily basis. Among hair and nail salon workers, the vast majority (95 percent) are female, and 42 percent are of Vietnamese descent. 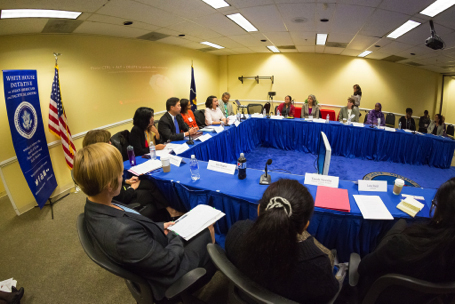 Participants gather at the Department of Labor in Washington, D.C. for the “Low-wage and Immigrant Women’s Work: Opportunities and Challenges for Improving Salon and Domestic Work in the U.S.” Philanthropic Briefing, November 13, 2014. (Photo by the U.S. Department of Labor)

Many may not be aware of the harsh conditions that beauty salon and domestic care workers face on a daily basis. Among hair and nail salon workers, the vast majority (95 percent) are female, and 42 percent are of Vietnamese descent. These women often work in poorly ventilated workspaces with little protective equipment, putting them at risk of exposure to toxins in the workplace that can cause respiratory and reproductive harm. On the other hand, domestic workers can become victims of wage theft and human trafficking. In fact, much of the domestic care industry is composed of immigrant women who work for private employers, often inside homes, and have no established work standards such as minimum wage, overtime, and sick and vacation pay. In both industries, many of the struggles and challenges for workers occur out of the public spotlight.

The White House Initiative on Asian Americans and Pacific Islanders (WHIAAPI) has been working to elevate awareness of the barriers that these workers face. On November 13, 2014, WHIAAPI, along with the Environmental Protection Agency (EPA) and the Occupational Safety and Health Administration (OSHA) of the U.S. Department of Labor, held the final Salon Safety Interagency Working Group (IWG) meeting to acknowledge the accomplishments of IWG members as well as discuss the ongoing need to protect salon worker health and safety. Members of the Salon Safety IWG, including EPA, OSHA, the Food and Drug Administration (FDA), the National Institute of Occupational Safety and Health (NIOSH), the National Institute of Environmental Health Sciences (NIEHS), and the Small Business Administration (SBA), have been working together since May 2011 to raise awareness, coordinate, and implement plans for the improvement of salon worker health and safety.

At least 20 members from federal agencies and salon worker advocates from the National Healthy Nail and Beauty Salon Alliance (Alliance) were present and shared their progress and achievements such as translating materials on nail salon safety and health in Korean, Nepali, Spanish, and Vietnamese as well as launching educational web resources on hair salons, nail salons, and dangerous chemicals in beauty products. Several salon owners and workers also shared their stories of working to limit exposure to toxins in their own salons. Finally, the IWG and the Alliance members discussed opportunities for collaborating to continue progress towards greater safety of the salon industry. 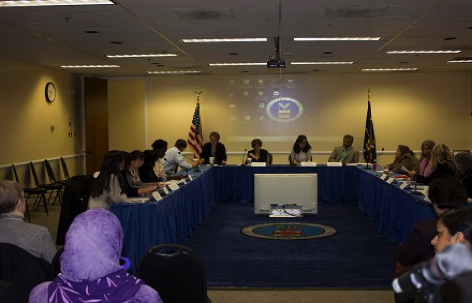 Federal representatives and community members gather at the Department of Labor for the final Salon Safety IWG meeting, November 13, 2014. (Photo by WHIAAPI)

In the latter half of the day, WHIAAPI partnered with foundations and funder affinity groups such as Asian Americans/Pacific Islanders in Philanthropy, Ford Foundation, Grantmakers In Health, Groundswell Fund, Health & Environmental Funders Network, Ms. Foundation for Women, Rachel’s Network, Rose Foundation for Communities and the Environment, and Women Donors Network, for a special philanthropic briefing, “Low-wage and Immigrant Women’s Work: Opportunities and Challenges for Improving Salon and Domestic Work in the U.S.” 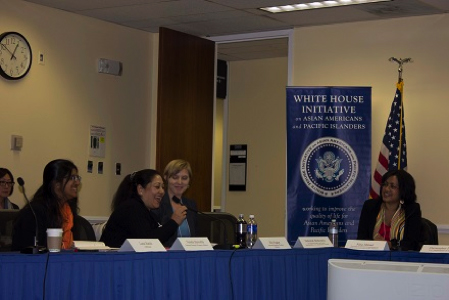 A domestic worker (second from left) shares her positive experiences working with an advocacy organizations represented at the Philanthropic Briefing held at the Department of Labor in Washington, D.C., November 13, 2014. (Photo by WHIAAPI)

The briefing showcased critical issues facing both salon and domestic workers, who are predominantly low-wage, immigrant women of color working in industries falling outside traditional workforce protections. WHIAAPI was joined by over 60 attendees, including salon and domestic workers, advocates, philanthropic leaders, and officials from several federal agencies. The goals for this event were:

Deputy Secretary of Labor Christopher P. Lu provided remarks commending the workers for their courage to speak out and share their stories. He also recognized that the greatest successes and advancements in our history have come from cross-sector partnerships among private companies, nonprofit organizations, and the government. Afterwards, four women shared their experiences of hardship while working as salon or domestic workers. It was truly inspiring to hear from impacted women on the issues that they face at their respective workplaces. Their testimonies provided a solid foundation to discuss opportunities for pubic-private partnerships to ultimately improve the quality of life for women in these fields.

Overall, the briefing helped solidify for me that more people need to be educated on these issues and that different sectors must partner in order to impact meaningful change.

N. Nina Ahmad is a member of the President’s Advisory Commission on Asian Americans and Pacific Islanders.