December 5, 2014 at 3:46 PM ET by Melissa Rogers and Mark Brinkmoeller
Twitter Facebook Email
Summary:
On December 2, the campaign to end human trafficking took a big step forward. Religious leaders from across the globe assembled at the Vatican on that day to sign a Joint Declaration of Religious Leaders Against Modern Slavery.

On December 2, the campaign to end human trafficking took a big step forward. Religious leaders from across the globe assembled at the Vatican on that day to sign a Joint Declaration of Religious Leaders Against Modern Slavery. This is the first time that leaders of the Christian Catholic, Anglican and Orthodox, as well as Buddhist, Hindu, Jewish and Muslim faiths have come together to jointly declare their intention to end modern-day slavery. Along with other government officials from around the world, we were honored to be there to witness this historic event.

Shortly after his election, Pope Francis sent Chancellor of the Pontifical Academy of Sciences and Pontifical Academy of Social Sciences, Bishop Marcelo Sanchez Sorondo, a handwritten note saying, “it would be good to examine human trafficking.” That was the spark that led to the formation of the Global Freedom Network (GFN), an initiative spearheaded by Pope Francis, the Archbishop of Canterbury Justin Welby, and Mr. Andrew Forrest, Chair and Founder of the Walk Free Foundation, with the mission of eradicating modern slavery and human trafficking by 2020. The GFN organized the Joint Declaration of Religious Leaders Against Modern Slavery, and it has now invited religious leaders of all faiths and nations to add their names to it.  The Declaration reads in part:

We pledge ourselves here today to do all in our power, within our faith communities and beyond, to work together for the freedom of all those who are enslaved and trafficked so that their future may be restored. Today we have the opportunity, awareness, wisdom, innovation and technology to achieve this human and moral imperative.

President Obama and his Administration share a commitment to this imperative. We have been working across the Federal government and with partners in Congress, local, state, and foreign governments and civil society to deliver on an ambitious agenda to combat modern-day slavery, which afflicts far too many communities, both here at home and around the globe. The President spoke forcefully about this issue in his landmark call to action at the Clinton Global Initiative in 2012. 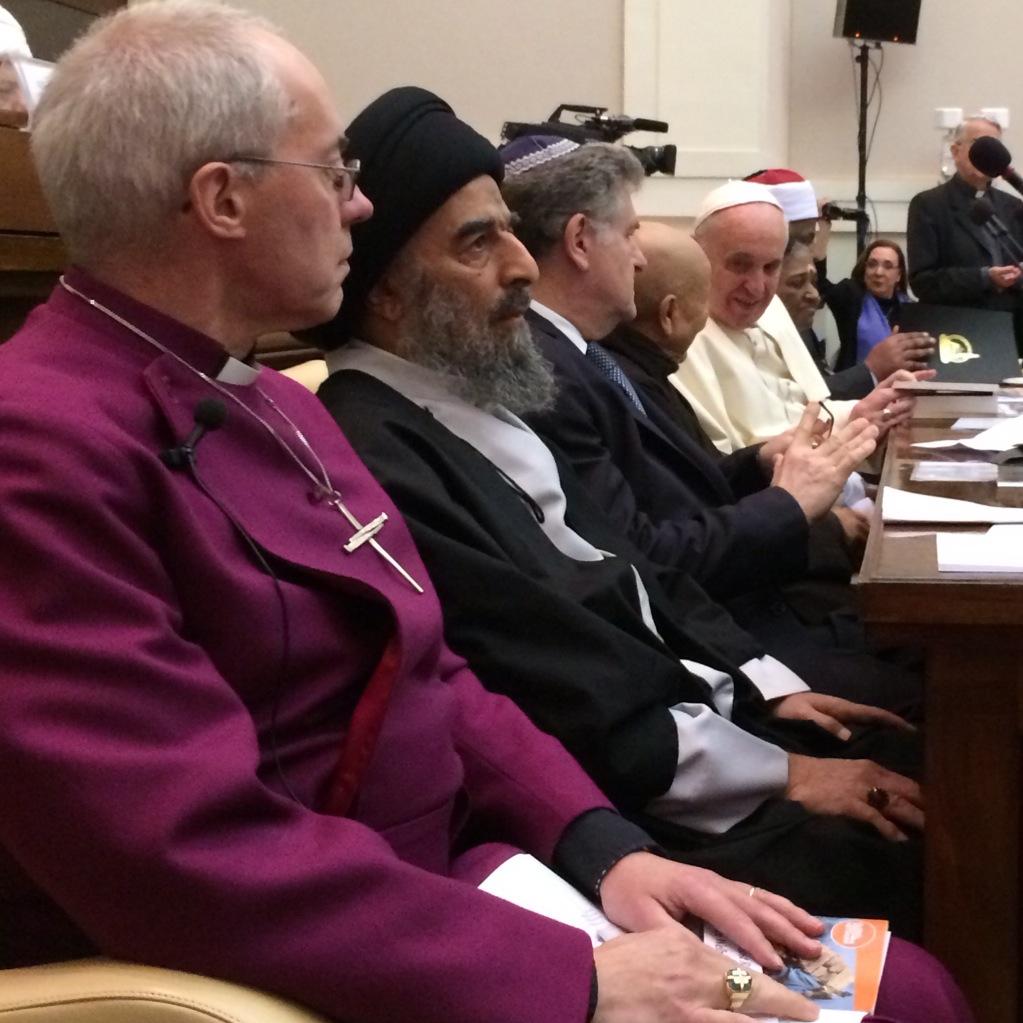 Pope Francis and other religious leaders meet at the Vatican on December 2, 2014 to sign the Joint Declaration of Religious Leaders Against Modern Slavery. (Photo by Mira Sorvino and Mara Vanderslice Kelly)

As President Obama has said:

Our fight against human trafficking is one of the great human rights causes of our time, and the United States will continue to lead it — in partnership with you. The change we seek will not come easy, but we can draw strength from the movements of the past. For we know that every life saved — in the words of [our] great [Emancipation] Proclamation — is “an act of justice,” worthy of “the considerate judgment of mankind, and the gracious favor of Almighty God.”

As we sat inside the room this week with such a diverse group of global religious leaders, all speaking with one voice on this crucial issue, we were deeply inspired. We look forward to continuing to work with the Global Freedom Network and people of good faith and will around the world to end human trafficking and to promote justice and freedom for all.

Melissa Rogers is the Executive Director of the White House Office of Faith-Based and Neighborhood Partnerships. Mark Brinkmoeller is the Director for the Center for Faith-based and Community Initiatives at USAID.