Eighteen months after the Senate passed a comprehensive, commonsense bill on immigration reform with bipartisan support; House Republicans still don’t have a plan to fix our broken system. Instead, House Republicans passed a bill this week that intends to reverse steps the President took to hold undocumented immigrants accountable and prioritize our safety as a nation. Those who voted “yes” for the proposal voted to prevent millions of undocumented immigrants from undergoing national security and criminal background checks, and make it more difficult for them to pay taxes.  Those who voted “yes” voted to go back to a system where immigration officials don’t prioritize deporting criminals and terrorist threats, which would also tear apart millions of immigrant families -- many of whom have been living here for decades.

On November 20th, President Obama announced immigration accountability executive actions that will better secure our border, hold potentially more than 4 million undocumented immigrants accountable, and ensure that everyone plays by the same rules and pays their fair share of taxes.  These actions will allow undocumented immigrants who have resided in the United States for at least five years, are parents of U.S. citizens or lawful permanent residents, and are non-priorities for removal to seek temporary immigration relief, on a case-by-case basis, by registering, passing background checks, and getting right with the law.  These actions would also give additional DREAMers the opportunity to request immigration relief through the existing Deferred Actions for Childhood Arrivals (DACA) policy. 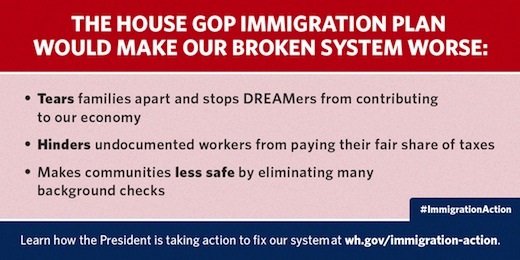 There is a long history of Presidents – both Democrats and Republicans – taking necessary executive actions to improve our immigration system.  Every president since President Eisenhower has taken action to address immigrations issues.  As a result, many more immigrants have come, stayed, and contributed to the strength of the United States.  Since the founding of our nation, the strength of America draws from generations of immigrants is a fact that’s woven deeply into the fabric of history.

The President stands strongly opposed this bill that would separate families, hurt DREAMers, and weaken the safety of our nation.  President Obama believes in fixing our immigration system with Congressional action by creating comprehensive, commonsense immigration reform. But until Congress is ready to step up and take action, the President will fix the immigration system within the limits of his authority by securing our border, holding immigrants accountable, and ensuring everyone plays by the same rule.

The President doesn’t stand alone.  A broad coalition of leaders and organizations, including faith, labor, Latino, and domestic violence groups, strongly oppose the proposal and continue to call on Congress to enact commonsense immigration reform.

·         Bishop Elizondo, Chairman of the U.S. Conference of Catholic Bishops Committee on Migration

“In the sixteen months since a bipartisan majority of the Senate passed S. 744, Republican Leadership has failed to schedule a vote or move any comprehensive immigration reform bill, like H.R. 15, through any House committee. This failure to act, combined with increased enforcement efforts, has created a crisis in our nation’s immigrant communities and in workplaces across the country. Rather than providing a solution, the Republican Leadership is advancing a bill that will deny millions of aspiring Americans the opportunity to live and work without fear.”

“The Latino community sees this bill, and the anti-immigrant rhetoric used by some Representatives who support it, as a political attack against Latino immigrants designed to appeal to a small but vocal group of ethnocentric white voters. It is extreme and unnecessary and does nothing to fix our broken immigration system…If the House of Representatives prefers Congressional over Presidential action as we do, then you should pass a bill such as H.R. 15 which would supersede the President’s actions, fix our broken immigration laws and provide needed relief to millions of people who are Americans in spirit if not yet on paper.”

“This fall we are celebrating the twentieth anniversary of the bipartisan Violence Against Women Act (“VAWA”), which has, since it was first enacted, included critical protections for immigrant victims of domestic and sexual violence. Congressman Yoho’s amendment undermines protections from removal for victims of domestic and sexual violence, dating violence, stalking, trafficking, and child abuse, and undermines the purpose and spirit of VAWA.”

We need to spend our time in Washington, DC working to pursue commonsense solutions to the nation’s most pressing problems.  This include fixing the broken immigration system.  The President supported the bipartisan Senate bill last year and will work with anyone in Congress that wants to make the immigration system better, not worse.