President Obama Nominates Ashton Carter as the Next Secretary of Defense

"Ash is rightly regarded as one of our nation’s foremost national security leaders," the President said in today's remarks. "As a top member of our Pentagon team for the first five years of my presidency, including his two years as deputy secretary, he was at the table in the Situation Room; he was by my side navigating complex security challenges that we were confronting. I relied on his expertise, and I relied on his judgment."

President Obama went on to detail Carter's "unique blend of strategic perspective and technical know-how," and the breadth of knowledge that he has about the Department of Defense:

As a student of history, he understands the United States -- and I’m quoting him now -- is “the single most [important] provider of security in the world,” and he played a key role in devising our defense strategy to advance that security.  He’s also a physicist, which means that he’s one of the few people who actually understands how many of our defense systems work.  And that has also allowed him to serve with extraordinary breadth and also depth in a whole range of work that we’ve had to do.

In one way or another, Ash has served under 11 Secretaries of Defense.  He’s an innovator who helped create the program that has dismantled weapons of mass destruction around the world and reduced the threat of nuclear terrorism.  He’s a reformer who’s never been afraid to cancel old or inefficient weapons programs. He knows the Department of Defense inside and out -- all of which means that on day one, he’s going to hit the ground running. 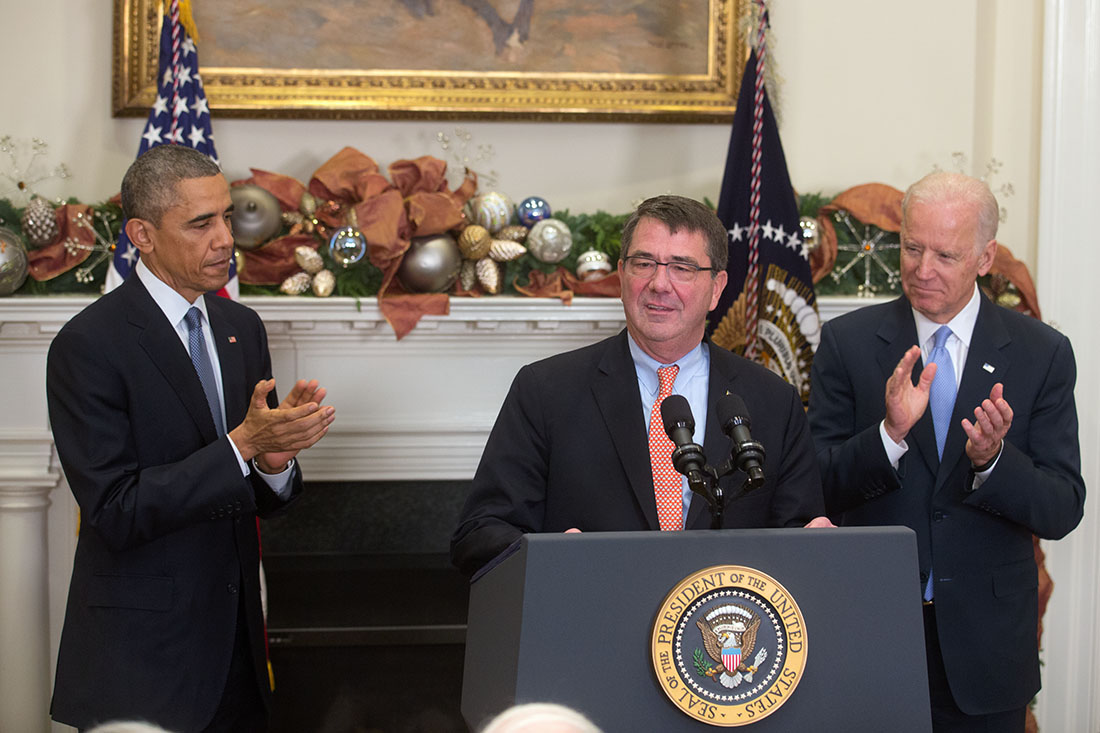 President Barack Obama and Vice President Joe Biden listen to Ashton Carter's remarks after the President announced the nomination of Carter to serve as Defense Secretary, in the Roosevelt Room of the White House, Dec. 5, 2014. (Official White House Photo by Chuck Kennedy)

The President also emphasized Carter's dedication to those in uniform, and to doing everything he can to ensure their safety and well-being:

When he cut outdated, unneeded systems, he did it because he was trying to free up money for our troops to make sure they had the weapons and the gear that they needed and the quality of life for themselves and their families that they deserve.

When our troops in Iraq and Afghanistan were struggling to defend against roadside bombs, he moved heaven and earth to rush them new body armor and vehicles.  It’s no exaggeration to say that there are countless Americans who are alive today in part because of Ash’s efforts.  When our forces sat down for Thanksgiving dinner far from home, or as our wounded warriors recovered in the hospital, or when our fallen heroes returned to Dover, Ash was there, often on his own time, without any publicity or fanfare.  And I know that Ash will be there for them now as Secretary of Defense.

Noting that the U.S. faces a number of challenges to our national security, the President made clear that as Commander-in-Chief, he will ensure our military is "second to none" -- and that Carter will be critical to that effort.