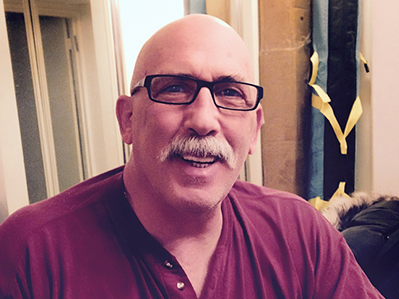 "The Affordable Care Act which you championed has saved my life. I thank you for that from my heart."

David H. has known more than his fair share of loss. His father, grandfather, brother, cousin, uncle, and other family members have all had cancer -- all but one tragically passed away too young.

Knowing his family history, this photographer and web designer from Elkins Park, Pennsylvania knew the chances of being diagnosed with cancer were high. However, the nature of his jobs meant an inconsistent income -- which meant he had not been able to afford coverage for over a decade.

But when the Health Insurance Marketplace opened in 2014, David chose a plan that worked best for his needs and enrolled. As soon as he got his insurance card, he went to the doctor for a long overdue check up. Sure enough, the doctors found four abnormal growths and proceeded to remove them all.

Thankfully, David is now "clear with good margins." "Without the Affordable Care Act, I would not have had a colonoscopy," he said. "One or all of the polyps would have metastasized within a year according to my doctors."

That is why he wrote to the President -- because the ability to afford quality coverage saved his life.

Need to get covered? Find a health plan that best fits your needs at HealthCare.gov. Already covered? Commit to help someone you know get covered here.