The Kennedy Center Honors, now in its 37th year, recognizes "living individuals who throughout their lifetimes have made significant contributions to American culture through the performing arts."

As the President said in his remarks yesterday, "Our art is a reflection of us not just as people, but as a nation. It binds us together. Songs and dance and film express our triumphs and our faults, our strengths, our tenderness in ways that sometimes words simply cannot do." 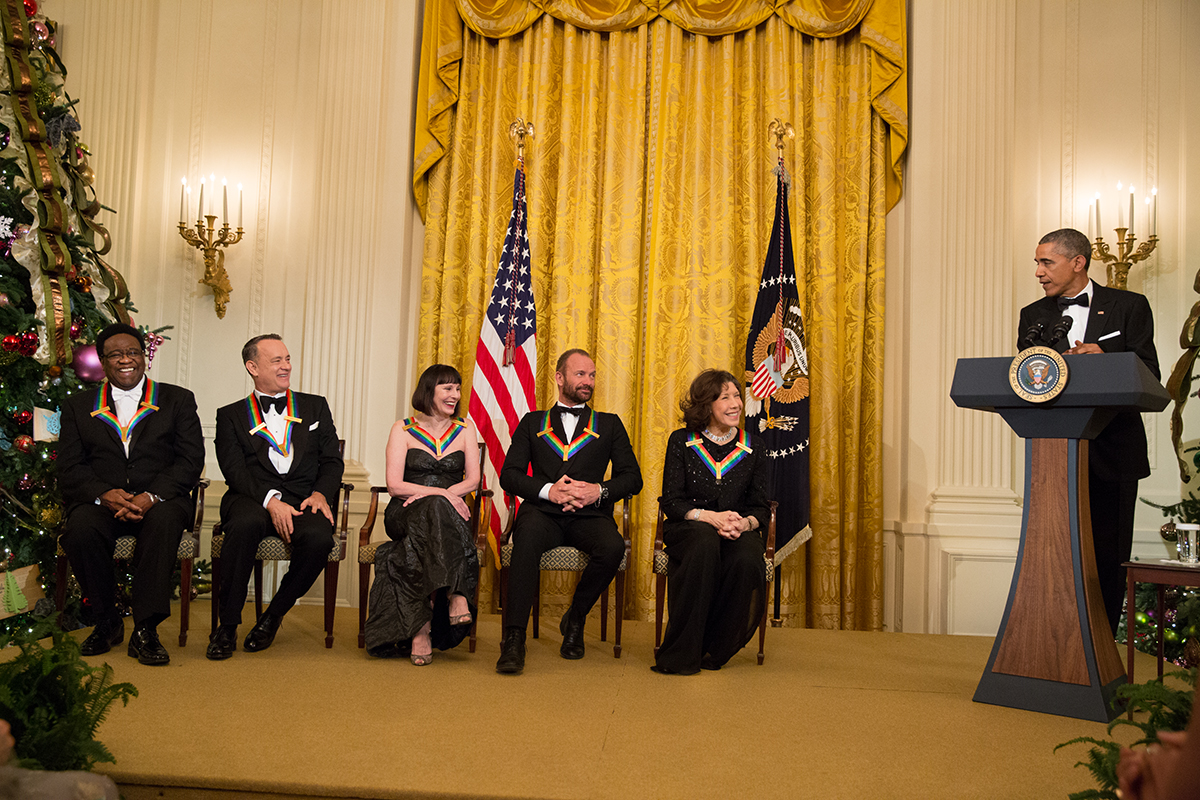 When honoring Rev. Al Green, President Obama joked that he's been keeping Green's traditions alive through his own singing. Although some of yesterday's audience members wanted the President to sing a bit from Green's hit "Let's Stay Together" -- as he did a couple of years ago at a fundraiser event in New York -- the President quickly declined.

The President gave a quick snapshot of Green's storied career -- from signing with Hi Records in his early 20s and bringing Memphis soul into the national spotlight, to becoming a pastor in Memphis in the 1970s and producing a string of hit gospel records, to his recent work with other popular acts such as the Roots, John Legend, and Justin Timberlake.

"For the peace he found and the soul he has shared with all of us," the President said, "tonight we honor the Reverend, Al Green."

Patricia McBride, who became the principal dancer at the New York City Ballet at age 18, danced with the company for 28 years -- the longest stretch in history.

"By the time she was finished, some of our greatest choreographers had written dozens of pieces just for her," President Obama noted, "which is not bad for a shy young girl who grew up in the shadow of World War II, putting glue on the toes of her dance shoes to make them last longer."

When McBride gave her final performance at the New York City Ballet in 1989, she was showered with 13,000 roses from the crowd. And as the President explained yesterday, that was fitting because of Patricia's personality:

When you hear about Patricia, you hear about somebody who is all rose and no thorn; legendary for her good cheer, her sweetness, her unabashed joyfulness.  And that personality translated to the stage, where her humor and grace was matched only by her power and stamina, and incredible athleticism.  She’s one of the most versatile dancers we’ve ever seen.

The President introduced Lily Tomlin by talking about her role in "Nine to Five," in which she plays an employee who's undervalued by her chauvinist boss:

Finally, she and two coworkers get so fed up, they kidnap him.  They get to work changing the office.  Working moms get treated better.  Productivity rises.  The top brass are thrilled.  It’s basically a live-action version of the working family policies I’ve been promoting for years.

"That role has Lily written all over it," the President said. "It's edgy, a little dark, but fundamentally optimistic."

He explained how Lily has created countless characters over the years -- such as Edith Ann, the five-and-a-half-year-old philosopher, or "Lucille the rubber freak" -- that are all a bit odd, but "portrayed with incredible warmth and affection, like Lily." As the President noted, Lily's versatility has resulted in a number of awards -- Emmys, Tonys, a GRAMMY, and now her selection as a Kennedy Center Honoree. 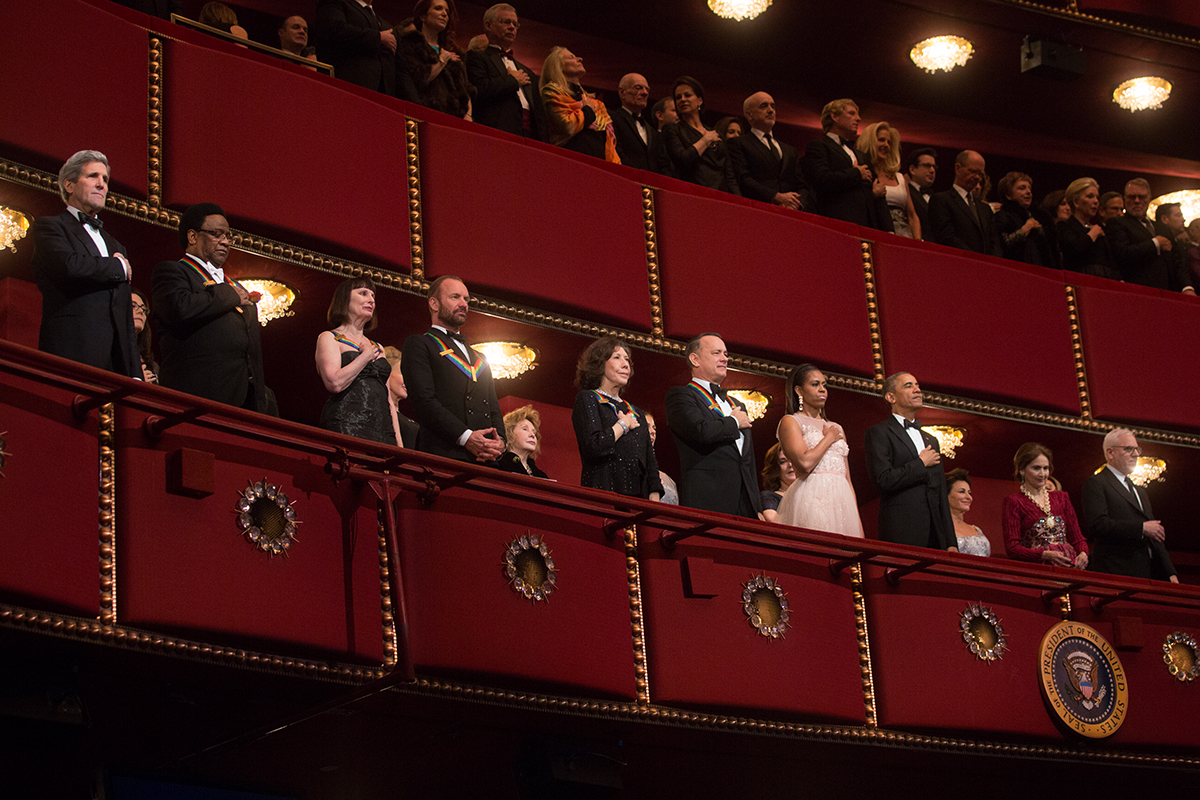 Singer-songwriter Gordon Sumner -- better known as Sting -- first came to us as part of the new wave band The Police, before embarking on a remarkable solo career. Although he joked about how he'd love to have the nickname "Sting," President Obama made clear that Sting is "more than just a name -- he is an all-around creative force."

There’s his singular voice on classics from The Police -- “Roxanne,” “Every Breath You Take,” “Every Little Thing She Does is Magic.”   There’s his incredible solo career -- the songwriting that shape-shifts between rock and jazz and reggae, and rhythms drawn from all around the world.  He’s acted in films.  He’s topped the classical charts.  He just opened a musical on Broadway.  The guy once turned down a chance to be a Bond villain.  Who does that?  Sting apparently.  I mean, look at him -- he’s too cool, right?

In addition to being an incredible artist, Sting has also made a name for himself over the years as a champion of human rights, and a staunch supporter of our environment.

Whether he's playing the role of Apollo 13 Commander Jim Lovell and telling "Houston, we have a problem," or he's telling the story of Forrest Gump and explaining to us how "life is like a box of chocolates," Tom Hanks has won the hearts of countless people over with his storied Hollywood career.

For his tremendous support of our veterans, he’s in the Army Ranger Hall of Fame. For his support of the space program, he has an asteroid named after him.  Through Tom, we’ve seen our World War II heroes not simply in sepia-tones somewhere in the distance, but as they truly were: gritty, emotional, flawed, human.  Through Tom, we saw the courageous faces behind an AIDS epidemic often overshadowed by stigma and bigotry. Through Tom, again and again, we’ve seen our passion and our resolve, and our love for each other.

Wrapping up his remarks, the President commended all of the honorees once again, and thanked them for the lasting contributions they've made to our society:

Reverend Al Green; Patricia McBride; Lily Tomlin; Sting; Tom Hanks -- charm, soul, spirit, spunk -- they’ve helped us better understand ourselves and each other.  And, as President Kennedy expressed, they’ve helped us center our purpose as a nation, and together reflect the quality of our society.  For that, we cannot thank them enough.  We are so glad to be able to celebrate these extraordinary people.  Thank you for everything that you’ve given to us over the years and for what you’re going to give us in the future. 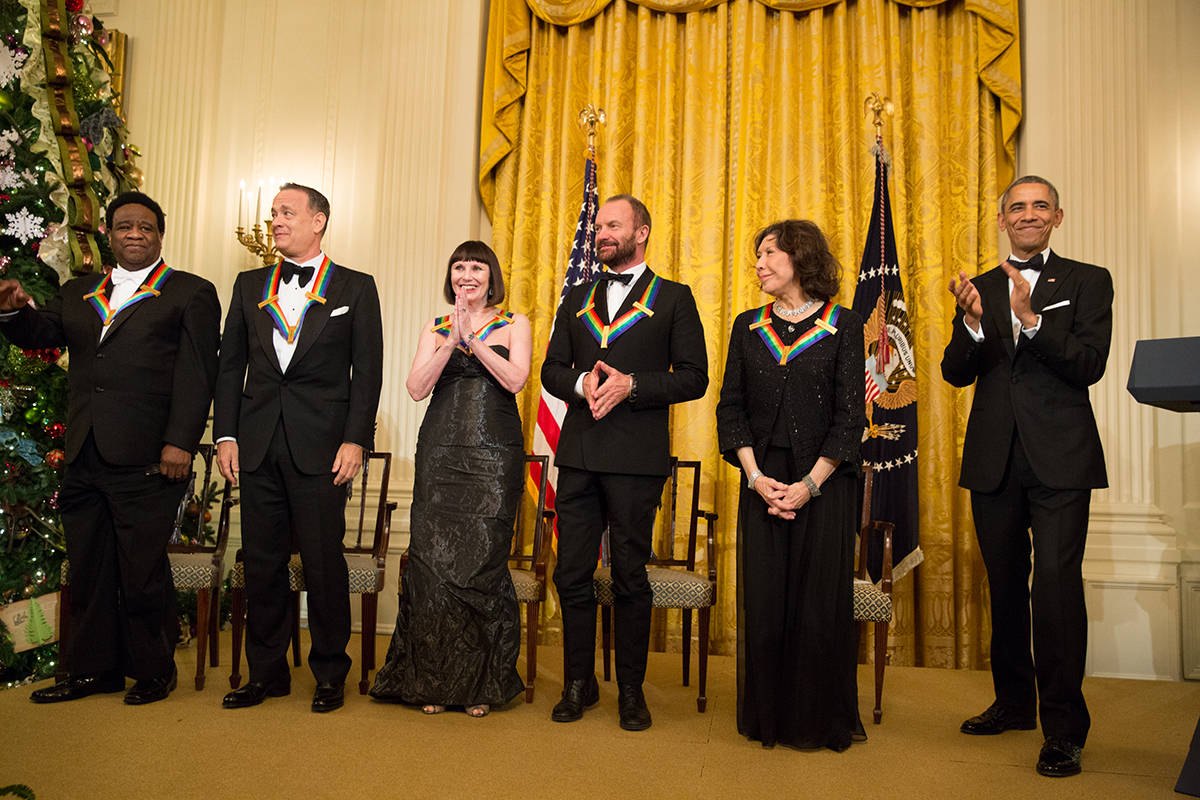