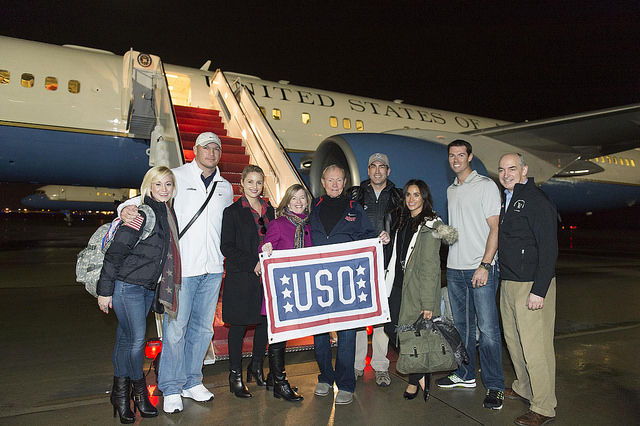 This was originally posted on the Joint Chiefs of Staff website.

The general, joined by singers, actors, sports icons and a comedian, is on his fourth and final USO tour to visit armed forces members during the holiday season. Incirlik Air Base is one of five countries and shows for this tour.

"Every year we try to go someplace where I can introduce the great talent that USO assembles, but also where I can learn something about the mission that we're trying to accomplish globally," Dempsey said. "Incirlik (AB) was a natural stop because of its importance as a NATO ally and what's going on to the Southeast and Middle East. I came here to say thank you for being part of the team."

Incirlik AB is a forward and strategically located base that has an important mission of readiness. After having dinner with a few Airmen, the general shared what's important for the Airmen who accomplish this mission to know.

"The cohesion of this unit really stands out," said the general. "You're great ambassadors for the United States. This isn't my first trip here, what's new of it is the increasing importance of this region."

Kellie Pickler, from American Idol, and Diana Agron, from the TV show Glee, hit the stage at the Incirlik AB Fitness Center and performed for a crowd of more than 300 attendees. Pickler crooned some of her country hits while Agron got the crowd involved, singing her holiday song favorites.

"Being here is an honor," Urlacher said. "It's overwhelming. I've had friends who told me about these tours, but you can't really understand until you're here and you hear the stories."

Doug Fister, a former Washington Nationals pitcher, shared how this event is close to him.

"Taking a little time to visit the people who sacrifice their time day in and day out for our freedom is important to me,” Fister said. “It's near and dear to my heart because I have had family members to serve in different services, and it's truly an honor to give back."

With the mission of continuous readiness even throughout the holiday season, Incirlik AB members took time to enjoy a night of entertainment. The top ranking officer of the armed forces closed the show with a special rendition of a holiday song and thanked the Airmen and families for their continued sacrifice of service.

"Thank you all from the senior leaders of the Joint Chiefs of Staff for helping us get the job done, and also working with our Turkish partners," Dempsey said.