December 9, 2014 at 12:03 PM ET by Tanya Somanader
Twitter Facebook Email
Summary:
As the Colbert Report winds down to its final episode, Stephen Colbert traveled south to George Washington University last night to sit down with President Obama -- or, as Stephen prefers, the man who once sat down with Bill O'Reilly.

As the Colbert Report winds down to its final episode, Stephen Colbert traveled south to George Washington University last night to sit down with President Obama -- or, as Stephen prefers, the man who once sat down with Bill O'Reilly.

It was a memorable meeting of two great leaders -- one of the free world, the other of "medium cable ratings." They discussed health care reform, the President's recent actions on immigration, climate change, and the presidency vs. punditry.

Of course, the President had the final word -- or decree -- on health care:

Most young people can get covered for less than $100. How is the President going to get that message out to the kids?  He could try to appeal to them directly through a speech or a press conference, but young people don’t watch real news shows like this one. They watch comedy shows, and I just don’t see the President going on one of those. They’re beneath his dignity.

Here are a few great exchanges you won't want to miss from last night's interview: 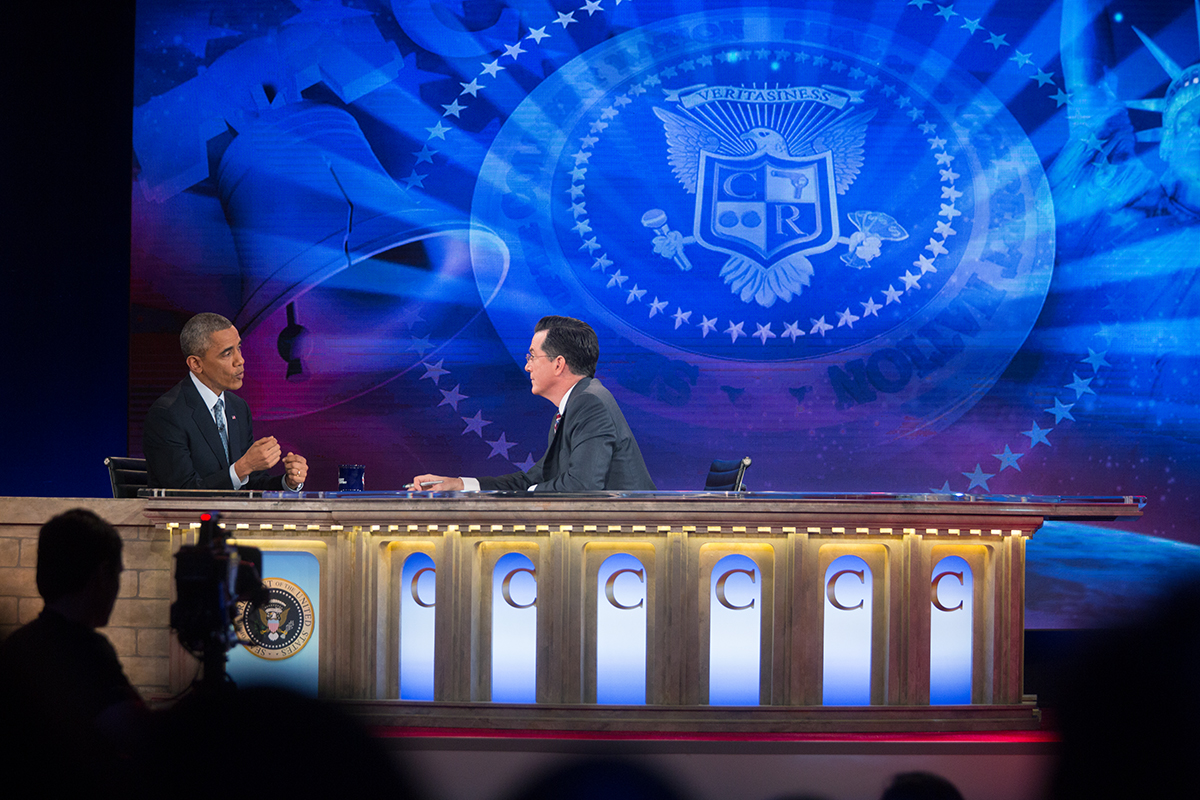 On working with Congress:

Stephen Colbert: Why do you think the young people did not come out to vote [in the recent election]?

President Obama: Well, I think they felt discouraged by what was happening in Washington. When you look at the issues, young people agree we should raise the minimum wage. They agree we should have equal pay for equal work. They agree that we should be making sure that a family -- if a child gets sick that you can stay home without losing your job. They believe in making sure college is affordable.

So they believe in these things, but unfortunately we had consistently House Republicans blocking action on those items. And at a certain point, folks figured, you know what, it’s just not going to make a difference. And part of my job in these next two years, and hopefully part of the job of Mitch McConnell and John Boehner is to convince people that even in divided government we can still put the American people ahead of politics.

President Obama: Actually, the truth is the economy had been on a pretty good run. We’ve had 57 straight months of private-sector job growth; over 10 million jobs created. Manufacturing, the strongest since the ‘90s. The auto industry has come rebounding back. [...]

What we haven't been able to see enough of until recently is wages and incomes going up. And people, first of all, got scared after 2007, 2008; even when they’ve got a job, they’re concerned about what’s out there in the future. A lot of young people came of age and graduated just as the job situation was really tough. And overall what we have not seen is the kind of income growth and wage growth.

Stephen Colbert: Let’s talk about the jobs out there and how many of them will be taken by all the immigrants you’re going to keep in this country. You realize you’re an emperor now; it has been declared. You are Barackus Maximus I. I am a Christian. Would you like to throw me to the lions? I would be delicious.  Why did you burn the Constitution and become an emperor?

President Obama: You know, actually, Stephen, everything that we have done is scrupulously within the law, and has been done by previous Democratic and Republican Presidents. Congress passes laws -- we’re supposed to execute them.  When it comes to immigration laws, in the same way that Ronald Reagan and the two Bush Presidents did, we have to make decisions. We’ve got a certain amount of enforcement resources. Who is it that we’re going after?  [...]

We can’t deport 11 million folks who are here, the vast majority of whom are good people who are just trying to get ahead and trying to make sure their families can get ahead. So instead of devoting a whole lot of resources on separating families, grabbing some mom who’s working at a hotel or some dad who’s working in a kitchen somewhere, and separating them out, let’s focus on deporting felons. Let’s focus on strengthening the border. Let’s focus on making sure the legal immigration system works better.

On the Keystone Pipeline:

President Obama: What I’ve said, Bill [O'Reilly], is I’m going to make sure that if we look at this objectively, we’ve got to make sure that it’s not adding to the problem of carbon and climate change. Because these young people are going to have to live in a world where we already know temperatures are going up, and Keystone is a potential contributor of that. We have to examine that and we have to weigh that against the amount of jobs that it’s actually going to create, which aren’t a lot.

Essentially, this is Canadian oil passing through the United States to be sold on the world market. It’s not going to push down gas prices here in the United States. It’s good for Canada. It could create a couple thousand jobs in the initial construction of the pipeline, but we’ve got to measure that against whether or not it is going to contribute to an overall warming of the planet that could be disastrous.

On the power of the presidency:

Stephen Colbert: Part of your campaign was believing that the President at the time had invested the executive with too much power. Then you became President and you seem to have a whole lot of power. Does that happen to every President, where you get into the office and you think, oh, you know what, I might be the only one I trust with this much power so I’ll hold on to it?

President Obama: Well, for the first time you're asking a sensible question. What is true the structure of our democracy is checks and balances, and every President -- even if on the outside, they were complaining -- there’s always the temptation to want to go ahead and get stuff done. And democracy is messy, and it’s complicated. So the tendency is to say, well, let me see if I can get this done -- just because things are so bottle up, especially at a moment when there’s a lot of gridlock.

What I’ve tried to do is to make sure that the Office of Legal Counsel, which weighs in on what we can and cannot do, is fiercely independent.  They make decisions.  We work well within the lines of that.  But my preference would be to get a whole lot more done through Congress -- which is why, for example, in the immigration legislation what I said to them is if you don't agree with how we're approaching this executive action, there’s an easy solution:  Pass a bill. If you pass a bill, then we're going to be able to get things done.

And too often what we have is a Congress that is stuck, and then the executive and/or the courts end up filling the gaps. And I think that the more we can get Congress to actually work the way it’s supposed to, the less these problems come up.

President Obama: I love the job. And it’s an incredible privilege. But when you're in it, you're not thinking about it in terms of titles. You're thinking about how do you deliver for the American people. And also when I go home, Michelle, Malia and Sasha give me a hard time.  And there are no trumpets.  And they tease me mercilessly for my big ears or my stodgy suits.

And the last question?

Don't miss a second of a great moment in late night television. You can watch part 1 of the interview here and part 2 here. 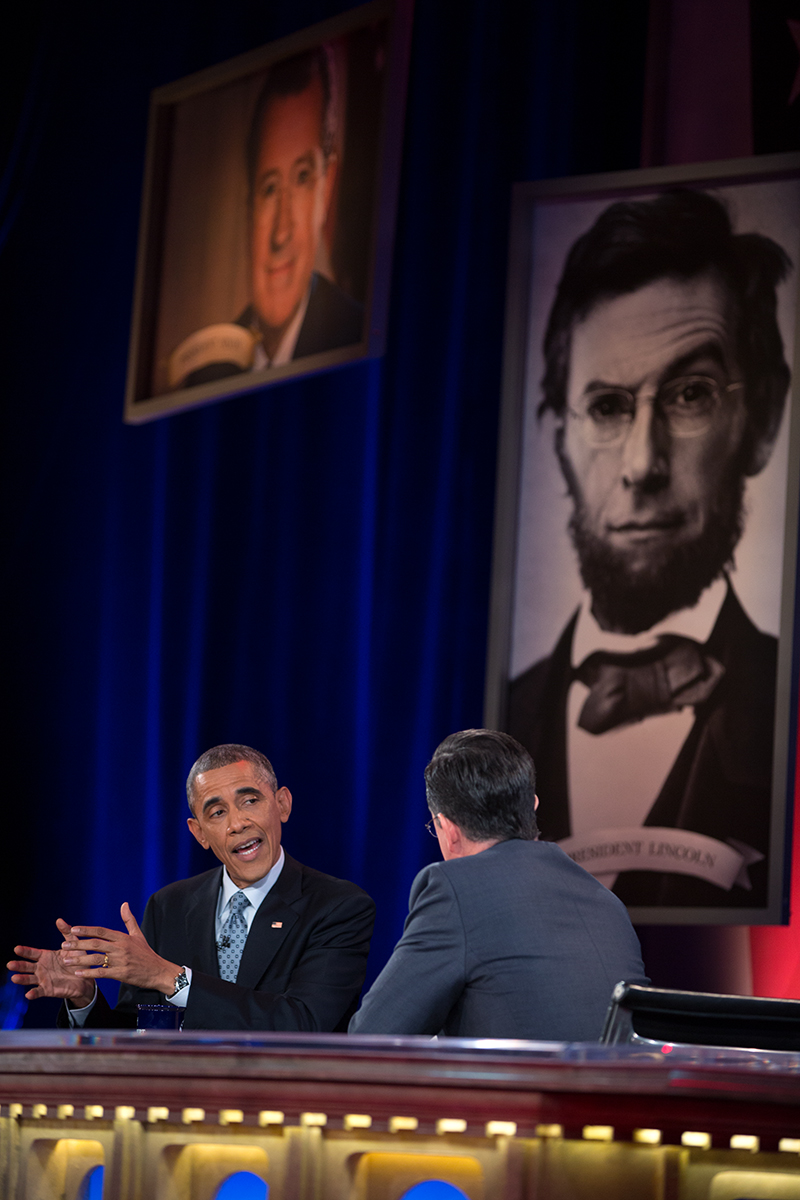