December 10, 2014 at 4:03 PM ET by Ezra Mechaber
Twitter Facebook Email
Summary:
President Obama became the first president to write a line of code as part of the "Hour of Code" -- an online event to promote Computer Science Education Week.

On Monday afternoon, President Obama became the first president to write a line of code.

As part of the "Hour of Code" -- an online event to promote Computer Science Education Week -- the President and Vice President joined middle-school students from New Jersey for a computer coding exercise.

President Obama spoke about the importance of strengthening STEM education, especially for girls and students underrepresented in STEM fields: "Part of what we're realizing is that we're starting too late when it comes to making sure that our young people are familiar with not just how to play a video game, but how to create a video game."

The President highlighted our country's tradition as innovators, noting that "one of the great things about America is that we invent and make stuff, not just use it."

And what did the Coder-in-Chief write for his first line of code?

The line, written in the computer programming language JavaScript, was part of an online exercise from Code.org to help teach young people how to write computer code using the children's movie Frozen. 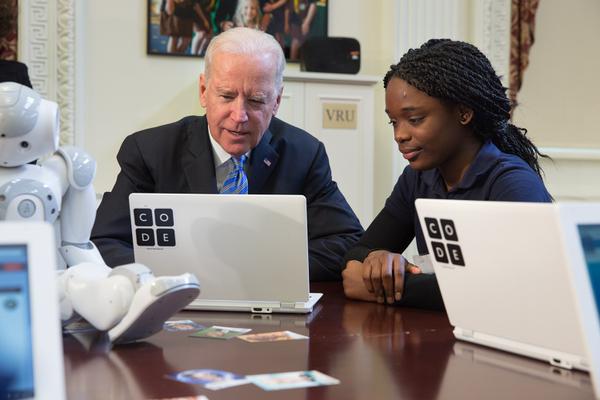 Vice President Joe Biden visits with students and is taught to write a line of code, during the "Hour of Code" event in the Eisenhower Executive Office Building, in Washington, D.C., Dec. 8, 2014. (Official White House Photo by David Lienemann)

The event followed new commitments announced by the White House to expand and improve computer science education, including: