December 15, 2014 at 5:26 PM ET by Tanya Somanader
Twitter Facebook Email
Summary:
President Obama traveled to Joint Base McGuire-Dix-Lakehurt in New Jersey today to offer his thanks to the U.S. military members and families stationed there and across the world for their service to our country.

"The message I’m here to deliver on behalf of the American people is very simple: It’s just to say thank you."

President Obama traveled to Joint Base McGuire-Dix-Lakehurst in New Jersey today to offer his thanks to the U.S. military members and families stationed there and across the world for their service to our country:

Thank you for your extraordinary service. I thank you as your President because you inspire me. And of all the privileges I have in serving in this office, nothing comes close to the honor of serving as your Commander-in Chief.

And I also thank you on behalf of more than 300 million Americans. We Americans may disagree and debate and argue sometimes -- that is part of our democracy. It is messy sometimes. Sometimes it results in some gridlock in Washington. But whether liberal or conservative, Democrat or Republican, white, black, brown, rich, poor -- no matter how we pray, no matter who we love, when it comes to our troops, when it comes to you and your families, as Americans we stand united. We are proud of you. We support you. And we can never thank you enough. 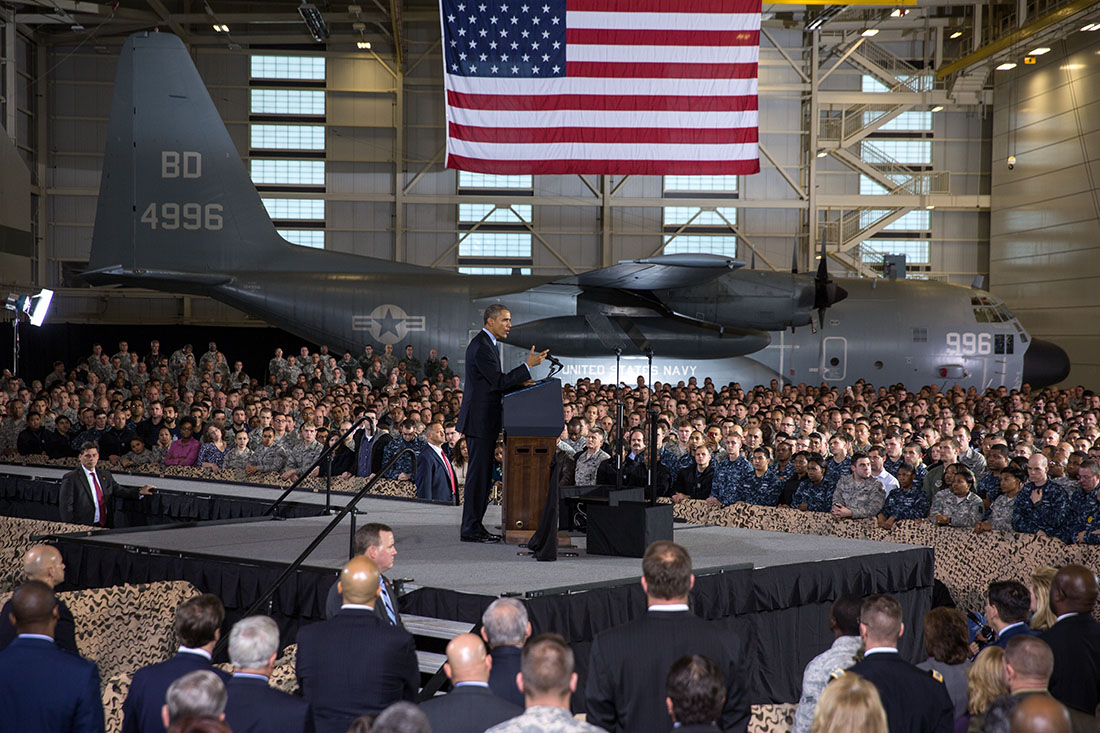 The President also marked an important milestone: After more than 13 years, we are finally bringing a responsible end to America's war in Afghanistan.  When the President took office, we had nearly 180,000 troops in Iraq and Afghanistan. By the end of this month, we'll have fewer than 15,000 in both countries. Over the course of six years, we have brought home 90 percent of our troops.

And this month, Afghans will take full responsibility for their security:

Even as our combat mission ends, our commitment to Afghanistan endures. We’ll continue to have a limited military presence there because we’ve got to keep training and equipping Afghan forces, and we’ve got to conduct counterterrorism missions because there are still remnants of al Qaeda there. After all the sacrifices you've made, we want to preserve the gains that you've made. We want a stable and secure Afghanistan. And we want to make sure that country is never again used to launch attacks against the United States of America. 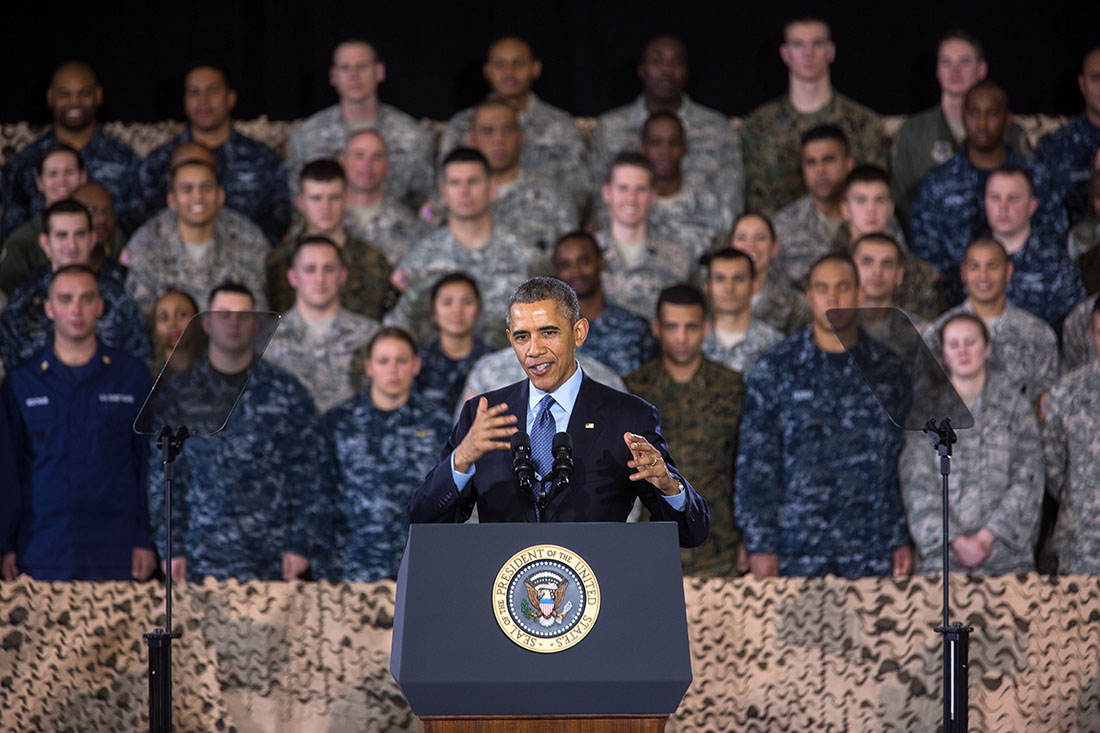 The United States is still leading the international community in tackling security challenges around the globe, including in our strategy to degrade and destroy ISIL. "In times of crisis, people around the world look to one nation to lead, and that is the United States of America," the President said.

Along with our coalition partners, we are hammering these terrorists, taking out their fighters, their commanders, hundreds of vehicles and tanks, nearly 200 oil and gas facilities, the infrastructure that funds their terror. More than a thousand fighting positions, checkpoints, buildings, barracks -- we’re taking them out. That's because of the work that you do. We’re cutting their command and control and supply lines, and making it harder for them to maneuver.

In Iraq, local forces have held the line in some places and pushed back ISIL in other places. In Syria, our airstrikes are inflicting heavy losses on ISIL fighters and leaders. Because of you, we have blunted their momentum and we have put them on the defensive. And these terrorists are learning the same thing that the leaders of al Qaeda have learned the hard way: They may think that they can chalk up some quick victories, but our reach is long. We do not give up. You threaten America, you will have no safe haven. We will find you. And like petty tyrants and terrorists before you, the world is going to leave you behind and keep moving on without you, because we will get you. That's thanks to you.

"This campaign in Iraq will take time," the President said. "But make no mistake, our coalition isn’t just going to degrade this barbaric terrorist organization, we’re going to destroy it."

That confidence in our inevitable success stems directly from the confidence we have in the greatest military in the world:

It’s not just your training, or your equipment, or your technology -- although all that’s important. What makes us special, what makes us the best is all of you. It’s your character and your willingness to say, "Send me." Your dedication to duty, and your courage, and your readiness to defend our values and our ideals of freedom and liberty -- not just for us, but for people all around the world.

You are the backbone of the greatest nation on Earth -- and you always will be that. And for that, America is eternally grateful, and I am incredibly proud to serve as your Commander-in-Chief. 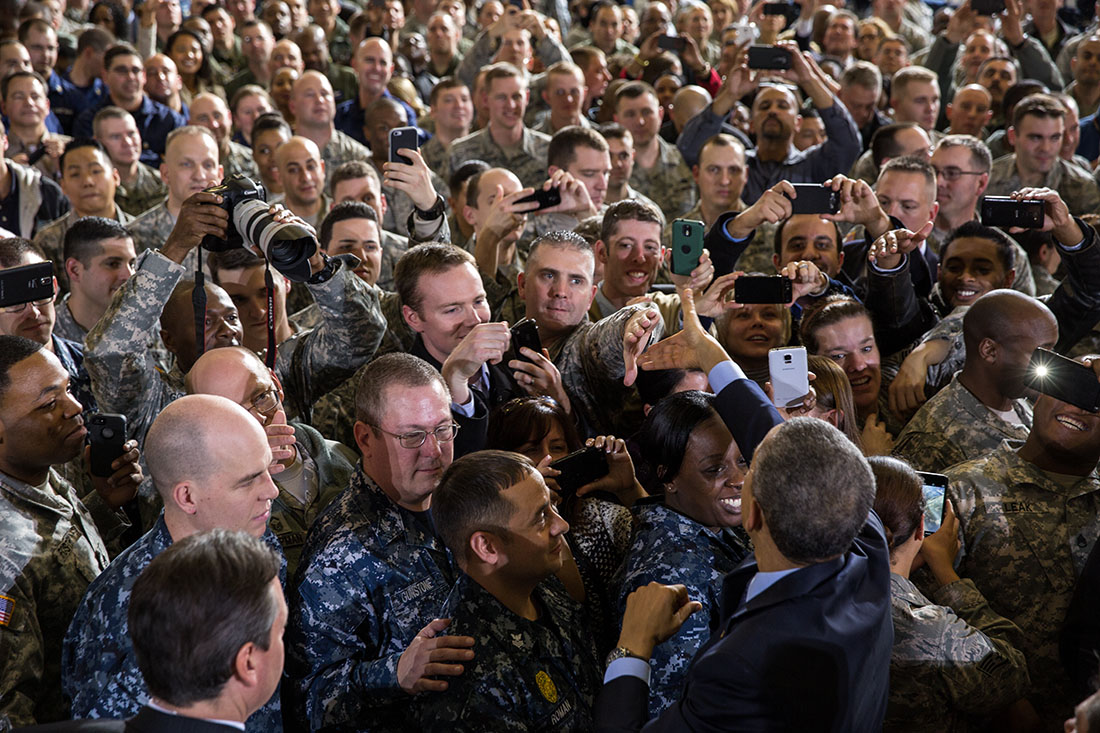