2014 Has Seen Largest Coverage Gains in Four Decades, Putting the Uninsured Rate at or Near Historic Lows

December 18, 2014 at 11:00 AM ET by Jason Furman, Matt Fiedler
Twitter Facebook Email
Summary:
2014 has seen dramatic reductions in the share of Americans without health insurance, reductions that correspond to an estimated 10 million people gaining coverage since before the start of open enrollment.

Earlier this week, the National Center for Health Statistics released new data on health insurance coverage during the second quarter of 2014, the first federal survey data that largely capture the effects of the Affordable Care Act’s first open enrollment period. These new data confirm earlier findings that 2014 has seen dramatic reductions in the share of Americans without health insurance, reductions that correspond to an estimated 10 million people gaining coverage since before the start of open enrollment.

This progress is even more striking when viewed in historical context. Building on work by other researchers, the Council of Economic Advisers has constructed estimates of the share of Americans without health insurance extending back to 1963. These estimates show that the drop in the nation’s uninsured rate so far this year is the largest over any period since the early 1970s, years in which the Medicaid program was still ramping up and the Medicare and Medicaid programs were expanded to people with disabilities.

With this year’s decline, the nation’s uninsured rate is now at or near the lowest level recorded across five decades of data. Furthermore, new data out today on Medicaid enrollment and data on Marketplace plan selections from earlier this week show that progress in reducing the number of uninsured Americans is continuing.

This new evidence that the law is succeeding in expanding coverage joins evidence showing that the nation is making progress on the Affordable Care Act’s other core goals: making our health care system more efficient and improving the quality of care that patients receive. On costs, underlying growth in health care prices, premiums, and per-enrollee spending—the costs that matter to families—remains exceptionally slow, thanks in part to the law’s reforms. This is occurring even as the dramatic expansion in coverage puts temporary upward pressure on growth in aggregate health care spending. Meanwhile, the nation is making progress on quality as well. Preliminary data released earlier this month showed that the rate at which patients are harmed when receiving hospital care has fallen 17 percent from 2010 through 2013, corresponding to an estimated 50,000 avoided deaths and $12 billion in savings over that period.

Tuesday’s data from the National Center for Health Statistics’ National Health Interview Survey (NHIS) show that the share of Americans without health insurance stood at 11.3 percent in the second quarter of 2014, down from 13.1 percent in the first quarter and from 14.4 percent on average during 2013. The 3.1 percentage point gain from 2013 through the second quarter of 2014 corresponds to 9.7 million Americans gaining health insurance coverage.

The findings from the NHIS are consistent with estimates based on other surveys conducted by the Urban Institute and the Commonwealth Fund and an analysis of data from the Gallup-Healthways well-being index published in the New England Journal of Medicine this summer. All of these sources show coverage gains of around 10 million during 2014. 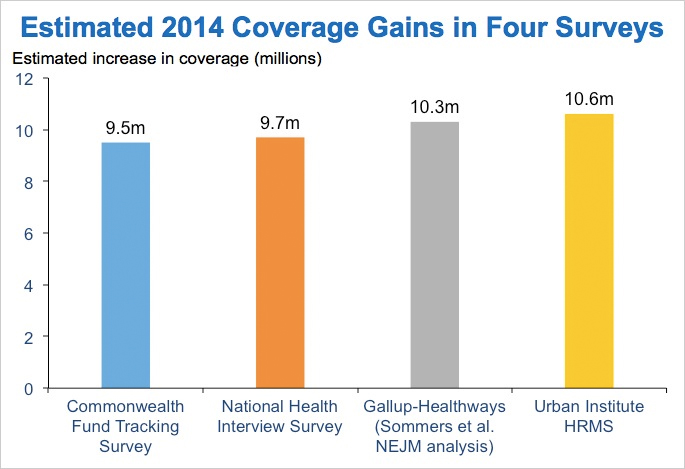 The small differences among the estimates are well within the range that can be accounted for by sampling error and modest methodological differences, including timing differences. Notably, the Urban Institute estimate reflects trends through September and this summer’s analysis of Gallup-Healthways data reflects trends through June. By contrast, both the NHIS and the Commonwealth Fund estimates include some interviews during April, at which point some plans selected during 2014 open enrollment had not yet taken effect. Additionally, Medicaid enrollment continued to grow through 2014, partly because people can enroll in this program throughout the year and also because states like Michigan and New Hampshire started their expansions after Marketplace open enrollment ended. These factors may help explain why the NHIS and Commonwealth Fund estimates are slightly smaller than the other two estimates.

2014 Gains Are the Largest in Four Decades, Putting Uninsured Rate at or Near Historic Lows

In light of these dramatic gains, a natural question is how recent trends compare to the last several decades of experience in the United States. To answer this question, the Council of Economic Advisers (CEA) has constructed a consistent historical series of the share of people without health insurance that extends back to 1963. In doing so, CEA drew upon earlier work by researchers at the National Center for Health Statistics using older NHIS data, as well as administrative data on Medicare and Medicaid enrollment in the programs’ early years. An appendix to this blog post provides a detailed description of CEA’s methodology and sources.

The figure plots the share of Americans without health insurance from 1963 through the second quarter of 2014. The United States last saw dramatic gains in health insurance coverage following the creation of Medicare and Medicaid in 1965. Large coverage gains continued in the early 1970s, driven in significant part by the continued ramp-up of the Medicaid program and the expansion of Medicare and Medicaid to people with disabilities in 1972. But progress then stalled, with coverage eroding during the 1980s and moving sideways over the two-plus decades that followed. 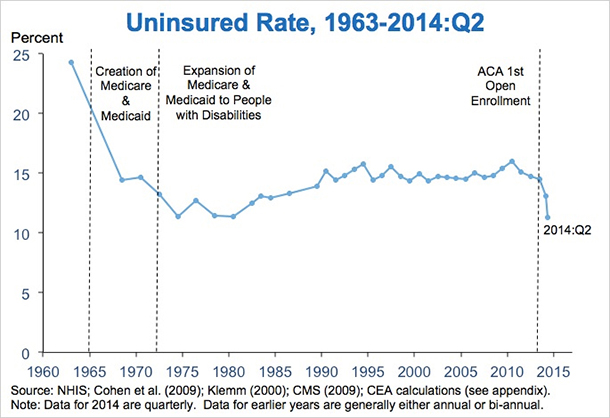 The picture has changed in 2014. As this week’s data confirm, 2014 has seen dramatic coverage gains, gains matched or exceeded only by those seen in the decade of rapid progress that followed the creation of Medicare and Medicaid. Following this year’s gains, we estimate that the nation’s uninsured rate is now at or near the lowest levels ever recorded across the slightly more than 50 years for which we have data. These levels were previously reached for only a brief period from the mid-1970s through 1980.

The progress made in 2014 is not the end. New data out today show that enrollment in Medicaid and the Children’s Health Insurance Program increased by more than 400,000 from September to October (in states reporting comparable data in both months), continuing the steady gains seen through much of this year. Similarly, data released earlier this week show that, through just the first four weeks of this year’s open enrollment, 2.5 million people have selected a 2015 plan in the Federal Marketplace, approximately half of whom are new to the Marketplace this year. These data imply that the uninsured rate will continue to fall in the year ahead, reaching low levels unprecedented in the nation’s history.

Expanding Coverage Benefits the Newly Insured and Our Economy

This year’s expansion in access to affordable, high-quality health insurance is a historic accomplishment. It is also one that economic evidence shows will generate major improvements in well-being for the newly-insured, as well as important benefits for our economy as a whole: