December 19, 2014 at 7:59 AM ET by Matt Nosanchuk
Twitter Facebook Email
Summary:
The President and Mrs. Obama welcomed members of the American Jewish community to the White House to celebrate Hanukkah. For the second year, they hosted two receptions in the Grand Foyer of the White House.

On Wednesday, December 17, the President and Mrs. Obama welcomed members of the American Jewish community to the White House to celebrate Hanukkah. For the second year, they hosted two receptions in the Grand Foyer of the White House. Guests represented the breadth of the Jewish community, including leaders from a wide range of local and national Jewish organizations, religious leaders representing the various Jewish denominations, state and local elected officials, Administration officials, Members of Congress, academics, musicians, authors, and other members of the Jewish community.

The receptions featured performances from Jewish college a cappella groups and the U.S. Marine Band. The food preparation occurred under the strict rabbinical supervision of Rabbi Levi Shemtov, Lubavitch Center of Washington (Chabad), in cooperation with the Rabbinical Council of Greater Washington.

This year, the White House worked with the U.S. Embassy in Israel to find four special menorahs and bring them to the White House for Hanukkah. Three were made by children especially for the White House, and one was even hand-carried by a U.S. Marine to ensure its timely arrival. The President and First Lady participated in candle lighting ceremonies using two of the menorahs, while the remaining two were displayed for guests.

At the afternoon reception, guests arrived to the melodies of Tizmoret, a Jewish a cappella group from Queens College Hillel. Tizmoret draws singers from colleges all throughout New York City and performs classic Jewish melodies, American pop music, and contemporary Israeli tunes.

The President and Mrs. Obama joined guests in the Grand Foyer for the ceremonial candle lighting program as the first day of Hanukkah was drawing to a close. The President delivered remarks, celebrating the story of Hanukkah and reminding us to make "some small miracles ourselves" and to share them "with the world." The President also noted, in the spirit of Hanukkah miracles, the release of U.S. aid worker Alan Gross after five years unjustly held in Cuba, fulfilling the mitzvah of pidyon shvuyim, the freeing of captives.

President Obama then invited Rabbi Bradley Shavit Artson, Dean of the Ziegler School of Rabbinic Studies and Vice President of the University of Judaism in Los Angeles, to lead us in the traditional Hanukkah blessings before the candlelighting.

The menorah was made for the White House Hanukkah reception by the Max Rayne Hand in Hand (Yad B’Yad) Bilingual School in Jerusalem. Two students from the school lit the menorah candles. Situated between the Jerusalem neighborhoods of Beit Safafa and Patt, the school brings together young people of different faiths to build relationships and learn together.

On November 29, 2014, a fire was started in two first grade classrooms in the school in Jerusalem. Anti-Arab graffiti was also plastered on the walls. Undaunted, the school followed through on its pledge to make the menorah. Made of wood and painted in different colors, each of the menorah’s eight branches represents one of the values on which the school was founded: Community, Education, Freedom, Human Dignity, Peace, Equality, Solidarity, and Friendship.

Two ninth grade students from the Hand in Hand School, Inbar Shaked Vardi and Mouran Ibrahim, along with Rebecca Bardach, a parent of Hand in Hand first and second graders, traveled all the way from Jerusalem to light the special menorah their community made. As the President noted, by coming together to light the menorah, Inbar, a Jew, and Mouran, a Muslim, remind us: "The light of hope must outlast the fires of hate. That’s what the Hanukkah story teaches us."

The President and Mrs. Obama joined guests in the Grand Foyer for remarks and candle lighting to mark the second day of Hanukkah. In his remarks, President Obama introduced the two candlelighters: Dr. Adam Levine, who recently returned from Liberiam where he provided assistance to those affected by the Ebola crisis; and Atakalit Tesfaye, an Ethiopian-Israeli graduate of the Yemin Orde Jewish youth village near Haifa, Israel. Yemin Orde was founded in 1953 to provide a safe haven to Holocaust orphans and children who immigrated to Israel in the 1950s. Today, Yemin Orde is home to over 400 children from around the world, including Ethiopia, Iran, India, Yemen, Eastern Europe, and South America.

As the President recognized, "Yemin Orde is just one village. But the story of Hanukkah teaches us that there's no such thing as a futile act of courage, or a small act of faith. One doctor can save a life. One school can help a child. That life, that child may change a village. One person can be the spark that changes the world."

After his remarks, the President invited Rabbi Angela Buchdahl, the first Asian American to be ordained as a rabbi in America, to offer remarks and recite the Hanukkah blessing. 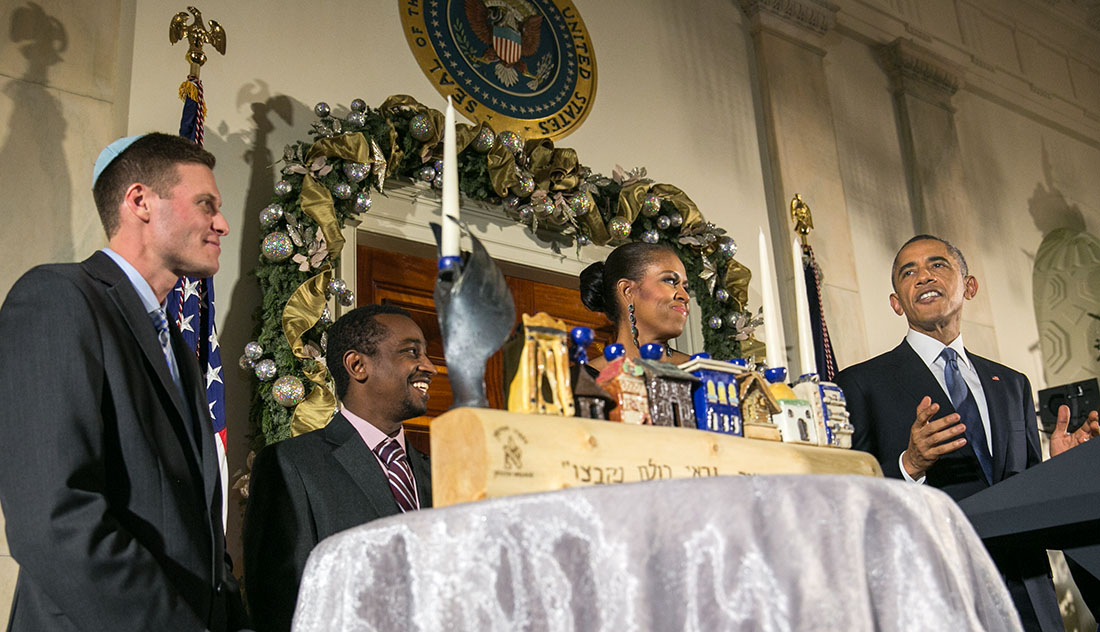 The menorah was made by the children of Yemin Orde.

Ambassador Susan Rice, the President’s National Security Advisor, visited Yemin Orde in October 2009. There, she said, "Yemin Orde is a microcosm of Israel and humanity as it should be." Later, when U.S. Ambassador to Israel Dan Shapiro visited, he planted an olive tree to commemorate the friendship between the United States and Israel.

The White House is honored to be tied once again to the incredible people of Yemin Orde through this special menorah. A collaborative effort among the children living there, the menorah represents the diversity of Yemin Orde's residents. The base of the menorah is made of olive wood, and the houses that hold the candles, representing the diverse Jewish ancestry of Yemin Orde's residents and of Israel's citizens, are made of clay. The shamash is made of iron and shaped like a cherub from the Tabernacle. The base of the menorah bears an inscription from Isaiah 60:4: "Lift up your eyes all around, and see; they all gather together…."

Hanukkah at the White House did not start with the Hanukkah receptions this year, however. It began on the first night of Hanukkah when Vice President Biden traveled a few yards from the White House to participate in the lighting of the National Menorah on the Ellipse. With the White House visible through the Menorah’s branches behind him and the Washington Monument directly in front of him, the Vice President noted the “ongoing miracle of coming together in a nation that respects the freedom to live and worship in peace – the same freedom that the Maccabees fought for so long ago.” This is so fitting, he said, because “[t]he truth is that Jewish heritage, Jewish culture, Jewish values are such an essential part of who we are that it’s fair to say that Jewish heritage is American heritage.”