December 22, 2014 at 2:15 PM ET by Jeffrey Zients, Cecilia Muñoz
Twitter Facebook Email
Summary:
In his State of the Union Address this year, the President vowed that 2014 would be a year of action—and he delivered on that promise. 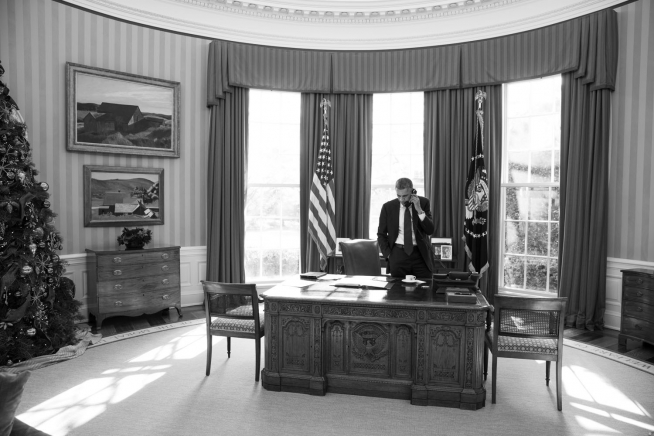 President Barack Obama talks on the phone at the Resolute Desk in the Oval Office. December 18, 2014. (Official White House Photo by Pete Souza)

In his State of the Union address this year, the President vowed that 2014 would be a year of action -- and he delivered on that promise.

As the year comes to a close, the results are crystal clear. The President and his Administration have taken more than 80 new executive actions this year to help grow the economy, create jobs, address the threat of climate change, and strengthen the middle class. And today, we’re releasing a year-end report detailing those actions.

President Obama rallied support for raising the minimum wage, while signing an executive order to raise the minimum wage for workers on new federal contracts. Cities, states, and businesses across the country responded to that call, taking action that will benefit 7 million Americans as of 2017. And workers on new or modified federal contracts will be paid at least $10.10 starting on New Year’s Day.

The historic actions the President took on immigration offer millions of undocumented immigrants a path out of the shadows while holding them accountable to undergo background checks and become taxpayers, all while doing everything we can to attract and keep the most talented high-skill workers to our shores from around the world. We’ve still got work to do and legislation is needed to comprehensively fix our broken immigration system, but these actions are a major step forward.

2014 was also a landmark year for changes that will dramatically cut greenhouse gases. To combat climate change, the President took steps to improve fuel efficiency for heavy- and medium-duty vehicles, put in place a Clean Power Plan to substantially cut carbon pollution from power plants; took action to make substantial cuts to hydrofluorocarbons; and reached a historic agreement to cut greenhouse gas emissions with China, among many others.

The President also protected large, pristine swaths of our federal lands and oceans from degradation by designating or expanding four national monuments. This brings the amount of land he’s conserved during his Administration to a total of 260 million acres.

The President’s actions also laid the groundwork for ambitious expansions of high-speed broadband in the classroom through his ConnectED Initiative, so that students will have access to the world’s knowledge and personalized education in real-time in the palms of their hands. With the combined public and private commitments marshaled this year, we’re on track to meet the President’s game-changing ConnectED goal for 99 percent of all students to have high-speed broadband in K-12 classrooms by 2018.

Following a review of federal job-training programs led by the Vice President, the Department of Labor awarded over $1 billion in competitive grants this year for proven job-driven training models like apprenticeships or partnerships between community colleges and local employers. And the President has helped make student loan payments more affordable by expanding Pay As You Earn to nearly 5 million additional federal student loan borrowers, who will have their student loan payments capped at 10 percent of their monthly incomes -- all while finalizing a tougher gainful employment rule, that will protect hundreds of thousands of career college students by ensuring that federal money isn’t used to pay for training that leads to unaffordable debts and poor employment prospects.

At last Friday’s year-end press conference, the President, in looking forward to the year ahead, summed up the opportunities and the challenges for 2015:

As we look ahead, the President will continue to work with Congress to find ways we can work together. But where he can, he’ll continue to use every authority available to make progress through executive actions that strengthen the middle class and our country, as he’s done throughout this year of action.