Third Estimate of GDP for the Third Quarter of 2014

December 23, 2014 at 9:30 AM ET by Jason Furman
Twitter Facebook Email
Summary:
Real gross domestic product (GDP) grew 5.0 percent at an annual rate in the third quarter of 2014 — the strongest single quarter since 2003 — according to the third estimate from the Bureau of Economic Analysis.

Today’s upward revision indicates that the economy grew in the third quarter at the fastest pace in over a decade. The strong GDP growth is consistent with a broad range of other indicators showing improvement in the labor market, increasing domestic energy security, and continued low health cost growth. The steps that we took early on to rescue our economy and rebuild it on a new foundation helped make 2014 already the strongest year for job growth since the 1990s. Indeed, 2014 was a breakthrough year for the United States across a wide range of metrics important to middle-class families. Nevertheless, there is more work to be done to ensure that all Americans can share in the accelerating recovery.

1. Real gross domestic product (GDP) grew 5.0 percent at an annual rate in the third quarter of 2014—the strongest single quarter since 2003—according to the third estimate from the Bureau of Economic Analysis. While quarterly growth reports are volatile, and some of the growth in Q3 reflected transitory factors, the recent robust growth data indicate a solid underlying trend of recovery. Indeed, the strong growth recorded in each of the last two quarters suggests that the economy has bounced back strongly from the first-quarter decline in GDP, which largely reflected transitory factors like unusually severe winter weather and a sharp slowdown in inventory investment. Consumer spending, business investment, and net exports all remained positive contributors this quarter. Real gross domestic income (GDI), an alternative measure of the overall size of the economy, was up 4.7 percent in Q3. 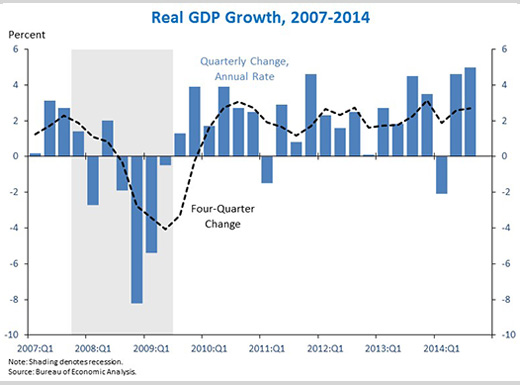 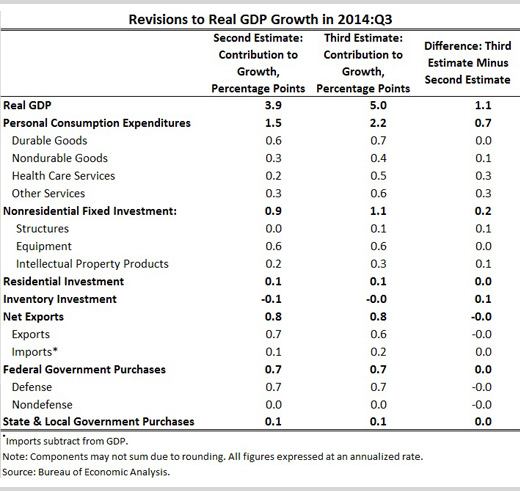 3. In the third quarter, personal consumption expenditures rose 3.2 percent at an annual rate. With real wages rising for two years, consumer sentiment at its highest level since 2007, and households having substantially deleveraged, consumption growth continues to trend upward. Consumers cite improved employment and wage expectations—along with declining gasoline prices—as major drivers of improved economic optimism, according the Reuters/University of Michigan consumer sentiment survey. The improved optimism is borne out in broad-based consumption growth, with durable goods spending continuing its pattern of strong growth in the recovery, and nondurable goods and services consumption picking up from the previous quarter. But challenges remain for consumers, and we have more work to do to boost wages for middle-class families. 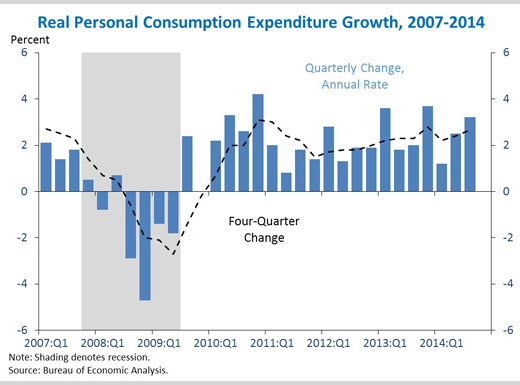 4. The current account deficit remained near its lowest level since the late 1990s as the declining federal budget deficit has boosted domestic saving. The current account balance is a measure of net transactions between the United States and the rest of the world, including our trade balance and other income flows across our borders. When the current account is in deficit, as it has been for most of the past 30 years, the United States borrows from abroad to finance its spending. But our current account deficit has narrowed sharply since the crisis, in large part because of increased domestic saving including the fall of the federal budget deficit from 9.8 percent of GDP in FY 2009 to 2.8 percent in FY 2014. The U.S. current account deficit now stands at 2.5 percent of GDP, down from more than 6 percent in the fourth quarter of 2005. The smaller deficit reduces our reliance on foreign borrowing, encouraging a more sustainable recovery. 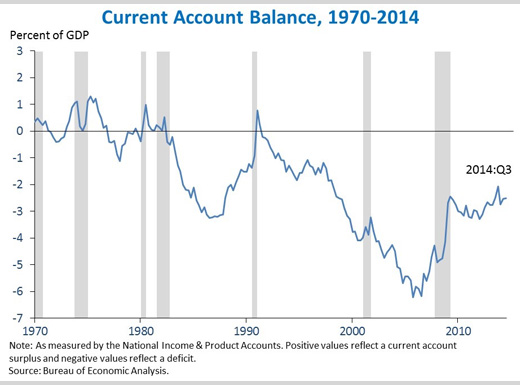 5. Real private domestic final purchases (PDFP)—the sum of consumption and fixed investment—is up 3.3 percent over the last four quarters, a faster four-quarter growth rate than real GDP. Real PDFP growth is generally a more stable and forward-looking indicator than real GDP because it excludes highly volatile components like inventory investment and net exports. In the first and second quarters of this year, GDP growth fluctuated widely, but PDFP was positive in both quarters, showing a less sharp pattern of decline and rebound. In the third quarter, PDFP grew a bit more slowly than GDP, but on balance, it has risen faster over the past year and continued its historical pattern of more steady growth.