December 30, 2014 at 3:39 PM ET by Elyse Cohen
Twitter Facebook Email
Summary:
From harvesting the White House Kitchen Garden to working to improve school nutrition, we had an exciting and fun 2014 at Let's Move! helping to get kids active and healthy.

From harvesting the White House Kitchen Garden to working to improve school nutrition, we had an exciting and fun 2014 at Let's Move! helping to get kids active and healthy. We even learned that the First Lady's favorite fall vegetable is a sweet potato. But what were some of our favorite moments from Let's Move! this year?

The First Lady launched Let’s Move! in 2010 to help kids and families lead healthier lives. That's why our favorite moments this year showed us how everyone has a role to play in reducing childhood obesity, from parents, elected officials, and schools to health care professionals, faith-based and community-based organizations, and private-sector companies. In no particular order, check them out below:

1. Jimmy Fallon helped challenge the country to show us how it moves.

First Lady Michelle Obama joined Jimmy Fallon during his first week as host of The Tonight Show in February to officially kick off the celebration of the fourth anniversary of Let’s Move!. She asked everyone in the country to show her how they move on Facebook, Twitter, and Instagram using #LetsMove.

The First Lady called in a favor: "Yo babe, hook me up!" Show us how you move & POTUS may join in the fun: http://t.co/yraUAHvDDq #LetsMove

Kids, athletes, and actors all got in on the action. Even the President and Vice President showed us how they move and how they stay hydrated.

Check out how Alonzo Mourning and @MarioLopezExtra are moving and then show how you move! #LetsMove https://t.co/4u1ev51qcu

2. Transformational changes were proposed for schools across the country.

Since launching Let’s Move!, the First Lady has been dedicated to ensuring that the school environment is one that supports the health of all its students. That's why she was excited to announce proposed guidelines for comprehensive school wellness policies that include a guideline to limit unhealthy food marketing in schools. In addition, through the expansion of the school breakfast program, nearly 9 million kids in 22,000 schools will now be able to start their day with a healthy breakfast.

3. The First Lady sat down to talk about the importance of good nutrition with school leaders, kids, and even Will Ferrell.

Let's Move! held a series of roundtables this year to talk about how to keep kids eating healthy. In May, Mrs. Obama heard success stories, strategies, and tactics from school leaders and experts across the country, including representatives from districts in Los Angeles and New York City and places like Burke County, Georgia; Norfolk, Virginia; and Montgomery County, Maryland. 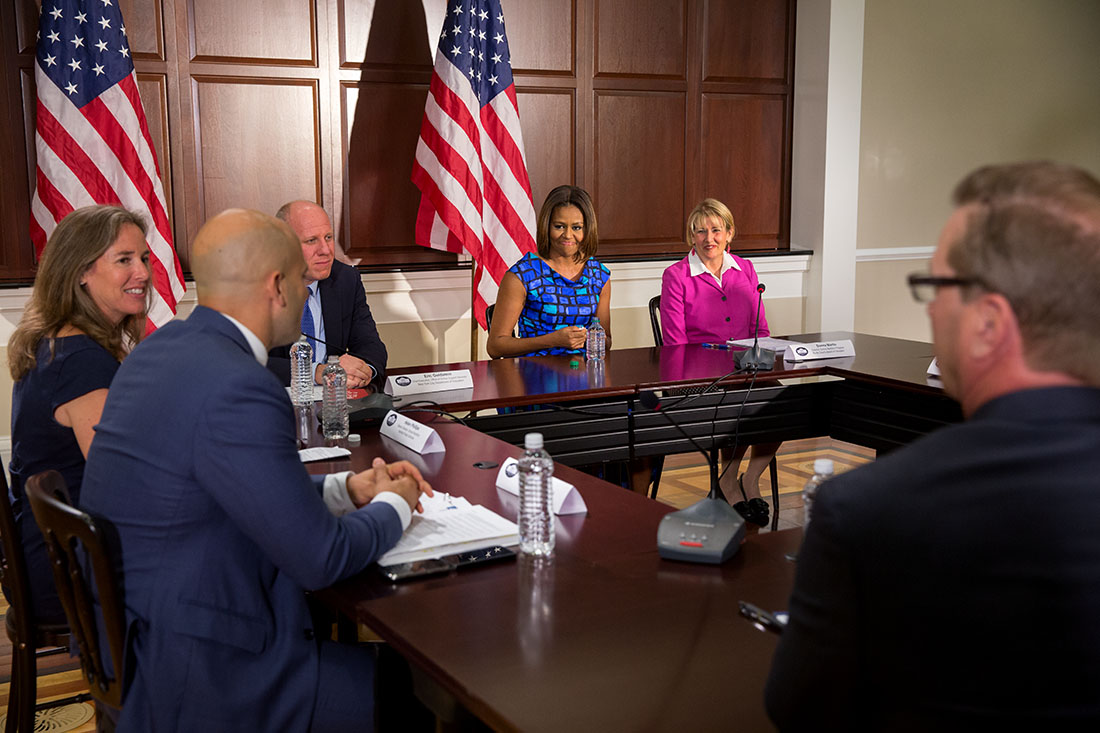 The First Lady also sat down with Will Ferrell for a different kind of roundtable. The pair hosted a focus group with young kids to ask them about eating healthy and being active. Here’s what the kids had to say:

Through Let’s Move! Child Care, providers are increasing physical activity for kids, limiting screen time, serving healthier food and beverages, and supporting breastfeeding mothers. To announce the number of child care centers that have signed on to support the program since 2011, the First Lady visited a local child care center in Maryland where she got moving with a couple of healthy vegetables.

5. The White House hosted kid chefs from every state for the third Kids' State Dinner.

The First Lady welcomed 54 young chefs from all over the country to the East Room for the 2014 Kids’ State Dinner. These 54 kids were selected from the more than 1,500 recipes submitted for the Epicurious Healthy Lunchtime Challenge. From the décor to the talent, food, and big smiles, the White House was bustling with our next generation of kids encouraging healthy habits. 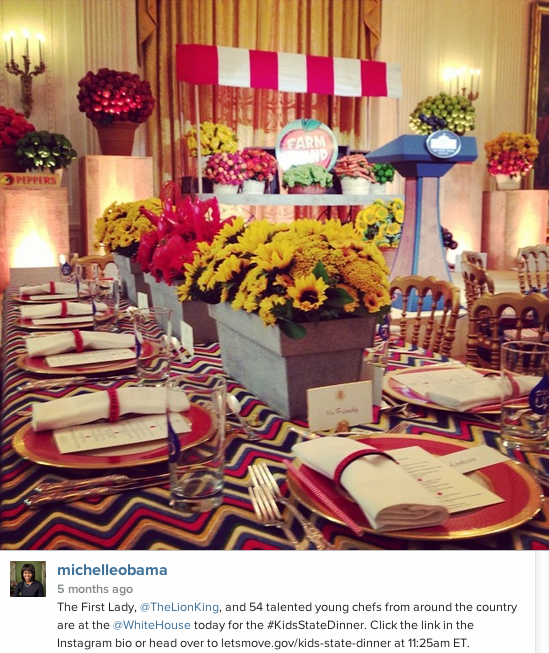 Deputy Director of Let’s Move! in the Office of the First Lady