January 9, 2015 at 9:30 AM ET by Jason Furman
Twitter Facebook Email
Summary:
This solid employment report caps off a strong year for the U.S. labor market, which achieved a number of important milestones in 2014. Total job growth in 2014 was the strongest since 1999, while the unemployment rate fell at the fastest pace in three decades.

Today’s solid employment report caps off a strong year for the U.S. labor market, which achieved a number of important milestones in 2014. Total job growth last year was the strongest since 1999, while the unemployment rate fell at the fastest pace in three decades. Although nominal wages fell in December, inflation-adjusted wages have generally been rising, and job growth has picked up in sectors that traditionally provide good, middle-class jobs. This week, the President has been laying out his vision to build on this progress by increasing access to community college, supporting the recovery in the housing sector and investing in U.S. manufacturing. On top of these steps, the President looks forward to working with Congress and taking action on his own authority to invest in America’s infrastructure, close tax loopholes and encourage job creation in America, support working families, expand overseas markets for American goods and services, make common-sense reforms to the immigration system, and raise the minimum wage.

1. The private sector has added 11.2 million jobs over 58 straight months of job growth, extending the longest streak on record. Today we learned that total nonfarm payroll employment rose by 252,000 in December, mainly reflecting a 240,000 increase in private employment. Private-sector job growth was revised up for October and November by a combined 50,000 so that over the past three months, private-sector job growth has averaged 280,000 per month. Private employment has risen by at least 200,000 for 11 consecutive months, the first time that has happened since the 1990s. 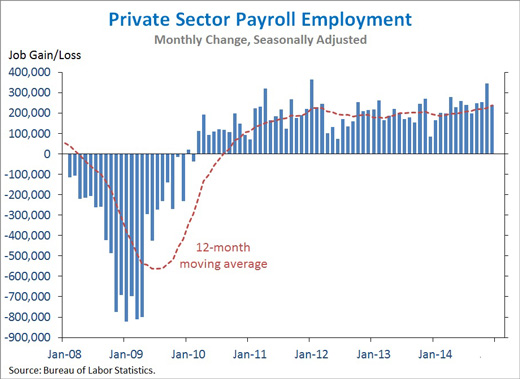 2. Total employment rose by 2.95 million in 2014, the most in any calendar year since 1999. Private-sector employers added 2.86 million jobs last year, the strongest private-sector job growth in any calendar year since 1997. The pace of overall job growth has increased, averaging 246,000 per month in 2014, up from 194,000 per month last year. On a percentage basis, the economy is adding jobs at a rate of about 2 percent per year, also on pace for the largest percentage increase in any calendar year since the late 1990s. Crucially, the pickup in the pace of job growth in 2014 has primarily been in industries with higher wages. For instance, the pace of manufacturing job growth has more than doubled to 16,000 per month this year, from 7,000 per month last year, and average weekly earnings for manufacturing workers are about $170 higher than for all private-sector workers. As discussed in greater detail below (see point #4), overall real average earnings have generally been growing, but there is more work to be done to raise wages and address longer-standing challenges around family incomes. 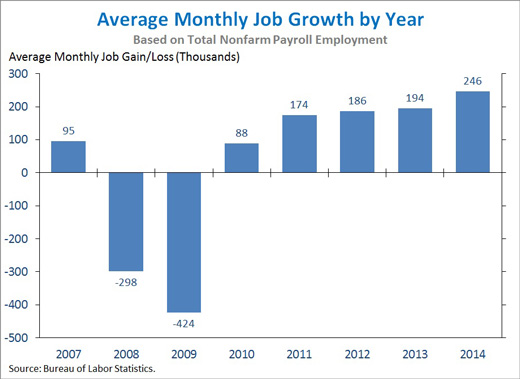 3. The annual average unemployment rate fell 1.2 percentage points between 2013 and 2014, the largest such decline since 1984. The rapid drop in the unemployment rate from an annual average of 7.4 percent in 2013 to 6.2 percent in 2014 is consistent with a range of indicators from the household survey that show the labor market strengthened considerably during 2014. In particular, the broader measures of labor underutilization published by the Bureau of Labor Statistics—including some people who have withdrawn from the labor force or who are working part-time for economic reasons—fell faster than the official unemployment rate in 2014. Last year, these alternative measures recorded their largest annual declines since they were first published in 1994. Additionally, in 2014, declining long-term unemployment accounted for about two-thirds of the decline in the overall unemployment rate, a disproportionate share given that about one-third of the jobless are long-term unemployed. Finally, while the annual average labor force participation rate edged down slightly relative to last year, it has been roughly stable, on balance, since late 2013. The stabilization of the participation rate helped to raise the employment-to-population ratio. 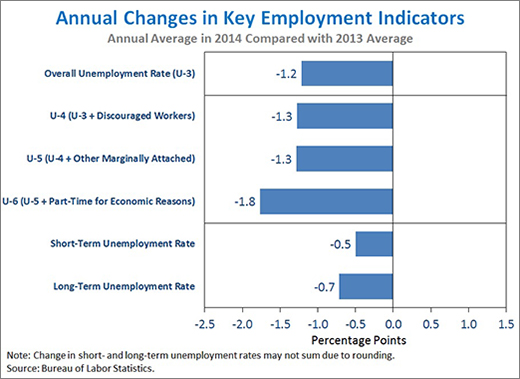 4. The nominal average hourly wage for production and non-supervisory workers was $20.59 in 2014, up 2.2 percent from 2013. While inflation data for December 2014 are not yet available, nominal earnings growth is likely to have exceeded inflation for the second straight year. In fact, the projected 0.7 percent increase in real earnings in 2014 is slightly faster than the average annual increase of 0.5 percent seen from 2000 to 2007. Although earnings rose in 2014 as a whole, the December decline in earnings is a reminder that more progress is still needed to overcome the decades-long challenge in this area that preceded the crisis. 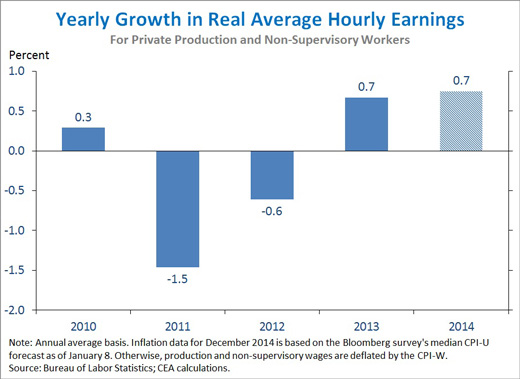 5. The construction and health care sectors saw strong job gains in December. Looking over the 58-month streak of private-sector job growth, December was one of the top 10 strongest months for construction (+48,000) and health care and social assistance (+44,000). In contrast, retail trade (+8,000) and transportation and warehousing (+3,000) saw job growth that was well below recent trends. Manufacturing added 17,000 jobs last month, in line with its average in 2014 as a whole. The manufacturing sector has now added 786,000 jobs over the past 58 months, the industry’s strongest job growth in since the 1990s. Across the 17 industries shown below, the correlation between the most recent one-month percent change and the average percent change over the last 12 months was 0.69, a bit below previous months, reflecting divergence from recent trends in a number of sectors. 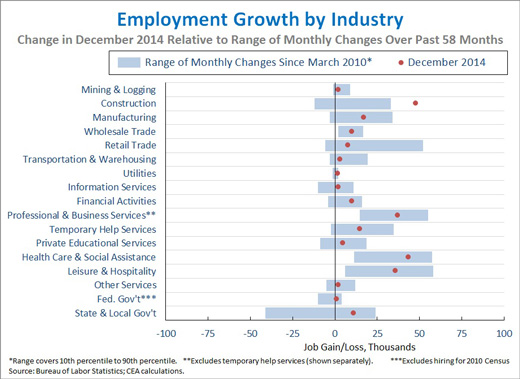