January 9, 2015 at 5:23 PM ET by Betsey Stevenson
Twitter Facebook Email
Summary:
In the 21st century, we need to once again lead the world in providing universal access to education. Today, the Administration announced a proposal that would give every American willing to work for it the opportunity to receive at least two years of education beyond high school for free.

America entered the 20th century as the world’s pre-eminent economic power, and in the following decades, it continued to prosper due in large part to its commitment to universal public high school education. We made high school free and universal at a time when other countries called that wasteful, and as a result, we created the most highly skilled workforce in the world. In the 1950s, American teenagers were three times as likely to be in school full-time compared to European teenagers. Unfortunately, we have lost that edge, and today we are struggling to keep up with the education rates of other advanced democracies.

In the 21st century, we need to once again lead the world in providing universal access to education. Today, the Administration announced a proposal that would give every American willing to work for it the opportunity to receive at least two years of education beyond high school for free. This program will create partnerships with states to help them waive tuition at community colleges for students who maintain a minimum GPA and progress towards graduation, cutting in half the cost of a four-year degree for those who continue their studies. It will also improve the quality of community colleges, by strengthening their ability to prepare students for either four-year programs or occupational programs in key fields such as nursing, information technology, and advanced manufacturing.

At least since Horace Mann led the crusade for free public elementary schools in the 19th century, invoking industrialists’ testimonials about the benefits of better-educated workers, Americans have recognized the critical link between education, a productive workforce, and economic growth. Economists Claudia Goldin and Lawrence Katz describe a virtuous cycle in which investments in education produce workers who are more innovative, and the technologies these workers create increases the demand for skilled workers, which further increases innovation, and so on. 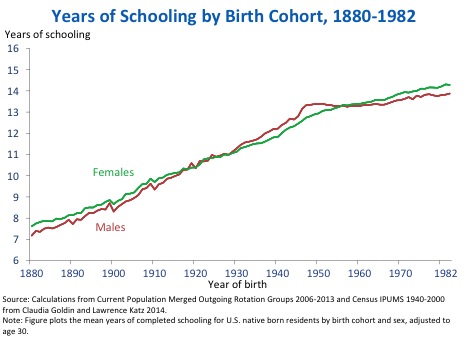 As the country was rapidly industrializing in the early 20th century, a growing awareness of the link between productivity and educational attainment helped foster a grassroots movement that demanded free public schools be expanded from elementary to secondary students in order to provide opportunity for advancement and meet demand for skilled workers. As a result of this “high-school movement” during the early 20th century, the skill level of American workers dramatically increased: Between 1900 and 1975, each generation had completed more than one-and-a-half more years of education than the one before it. Between 1910 and 1950 alone, high school graduation rates skyrocketed from under 10 percent to nearly 60 percent. At the time, universal secondary education was a radical innovation: No other nation came close to providing secondary education to as high a fraction of its citizens until the latter part of the 20th century. And the economy benefited as a result of these investments: Goldin and Katz estimate that increased educational attainment can directly account for about 12-17 percent of economic growth over this period, not including indirect benefits such as greater innovation.

Our history shows that expanding educational access is a key to ensuring that fruits of economic growth are shared by everyone. In the first part of the century, increasing demand for skilled workers driven by technological changes, such as mass production and electrification, was met by rapidly increasing skill levels of the workforce. While education was a valuable investment, the wages of college graduates grew in tandem with those with less education. But after the late 1970s, as the growth in educational attainment plateaued, the needs of the employers adopting computers and other new technologies started to put upward pressure on college graduates’ wages, leaving others behind, and inequality grew. That’s why, today, as businesses continue to innovate and rely on workers with higher-level skills, it’s important that we grow the set of workers who have those skills. 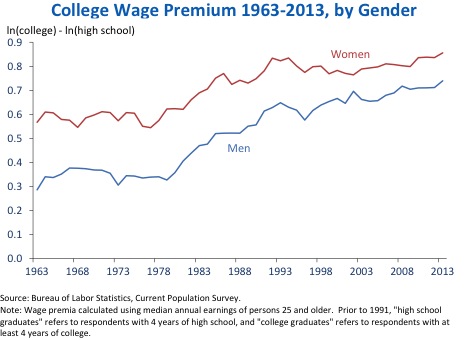 As more and more jobs require post-secondary skills, expanding access to higher education will help America remain competitive in the growing 21st century global economy. By 2020, an estimated 35 percent of job openings will require at least a bachelor’s degree and 30 percent will require some college or an associate degree. 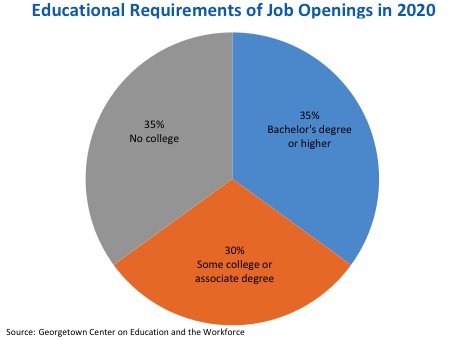 Today, 45 percent of undergraduate students attend one of our nation’s 1,100 community colleges. Community colleges offer students affordable tuition, open admission policies, and convenient locations. For many students, they offer academic programs and an affordable route to a four-year college degree, particularly for students who are generally older, more likely to have children, and more likely to work while in school. They are also uniquely positioned to partner with employers to create tailored training programs to meet economic needs within their communities such as nursing, information technology, and advanced manufacturing.

Employment and wage growth are inherently tied to education and training. Workers with more education are more likely to be in the labor market, they earn more, and they spend less time unemployed. And it is not just workers who benefit — our economy is poised for greater growth when our workers are more educated. The benefits of education have historically given us our economic edge in the global economy. By taking the next step in ensuring access — making two years of community college tuition free and universally available — we can help ensure that our workers remain the most productive workers in the world.