January 12, 2015 at 6:01 PM ET by David Hudson
Twitter Facebook Email
Summary:
President Obama stops by the Federal Trade Commission offices to talk about how we can better protect consumers from identity theft and safeguard everyone's privacy, including our children.

In the lead-up to the State of the Union next Tuesday, President Obama's been traveling across the country unveiling some of the ideas he'll be talking about in the address.

Today, he stopped by the Federal Trade Commission offices to talk about how we can better protect consumers from identity theft and safeguard everyone's privacy, including our children. He laid out a number of new steps and proposals, which you can read more about below.

"Since I've only got two years left in the job, I tend to be impatient and I didn't wait to wait for the State of the Union to start sharing my plans," the President quipped at the top of his remarks.

"If we're going to be connected, then we need to be protected."

In today's world, we're exchanging more and more sensitive information online -- we're managing our bank accounts, paying bills, handling medical records, and even controlling our homes from our smartphones. But as the President made clear today, the ability to do all of this online poses additional risks:

Major companies get hacked; America’s personal information, including financial information, gets stolen. And the problem is growing, and it costs us billions of dollars. In one survey, 9 out of 10 Americans say they feel like they’ve lost control of their personal information. In recent breaches, more than 100 million Americans have had their personal data compromised, like credit card information. When these cyber criminals start racking up charges on your card, it can destroy your credit rating. It can turn your life upside down. It may take you months to get your finances back in order.

"This is a direct threat to the economic security of American families, and we've got to stop it," President Obama said. "If we're going to be connected, then we need to be protected." 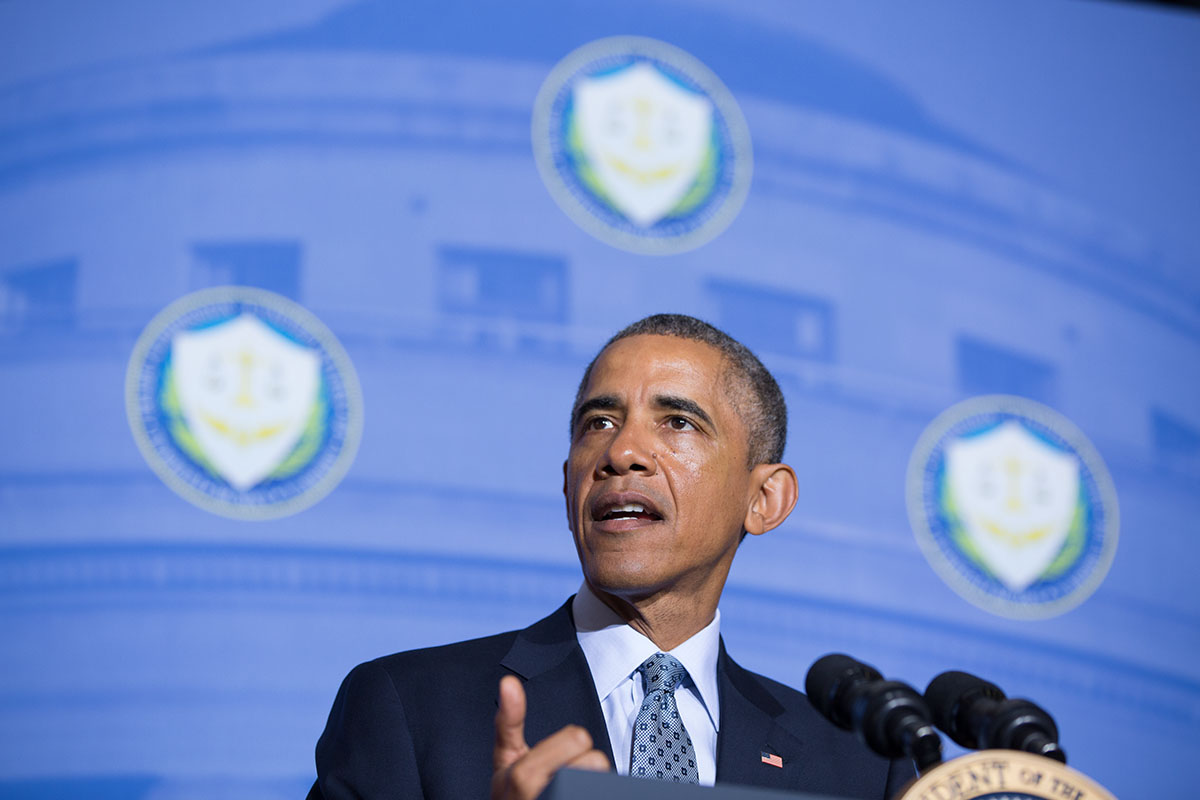 The President announced a number of new steps today to safeguard Americans' identities and privacy:

Right now, almost every state has a different law on this, and it’s confusing for consumers and it’s confusing for companies -- and it’s costly, too, to have to comply to this patchwork of laws. Sometimes, folks don’t even find out their credit card information has been stolen until they see charges on their bill, and then it’s too late. So under the new standard that we’re proposing, companies would have to notify consumers of a breach within 30 days. In addition, we’re proposing to close loopholes in the law so we can go after more criminals who steal and sell the identities of Americans -- even when they do it overseas. 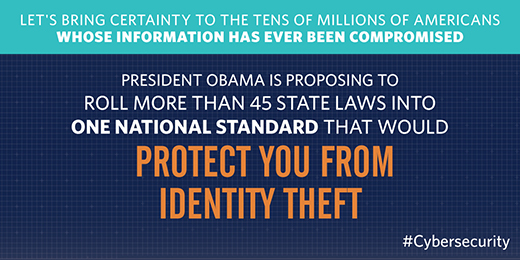 This includes JPMorgan Chase, Bank of America, USAA, State Employees’ Credit Union, Ally Financial. Some of them are here today. I want to thank them for their participation. This means that a majority of American adults will have free access to their credit score, which is like an early warning system telling you that you’ve been hit by fraud so you can deal with it fast. And we’re encouraging more companies to join this effort every day. 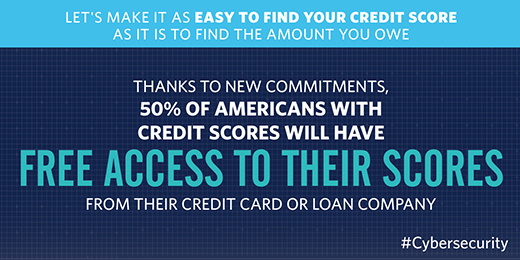 Working with many of you -- from the private sector and advocacy groups -- we’ve identified some basic principles to both protect personal privacy and ensure that industry can keep innovating.

So we're going to be introducing this legislation by the end of next month, and I hope Congress joins us to make the Consumer Privacy Bill of Rights the law of the land.

Today, we’re proposing the Student Digital Privacy Act. That's pretty straightforward. We’re saying that data collected on students in the classroom should only be used for educational purposes -- to teach our children, not to market to our children. We want to prevent companies from selling student data to third parties for purposes other than education. We want to prevent any kind of profiling that outs certain students at a disadvantage as they go through school.

And we believe that this won’t just give parents more peace of mind. We're confident that it will make sure the tools we use in the classroom will actually support the breakthrough research and innovations that we need to keep unlocking new educational technologies. 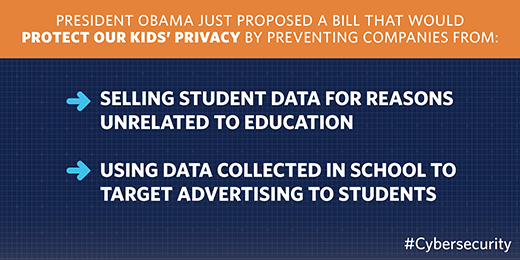 "We pioneered the Internet, but we also pioneered the Bill of Rights, and a sense that each of us as individuals have a sphere of privacy around us that should not be breached, whether by our government, but also by commercial interests," the President said. "And since we’re pioneers in both these areas, I'm confident that we can be pioneers in crafting the kind of architecture that will allow us to both grow, innovate, and preserve those values that are so precious to us as Americans."