January 13, 2015 at 10:26 AM ET by David Hudson
Twitter Facebook Email
Summary:
President Obama welcomes the 2014 NBA Champion San Antonio Spurs to the White House -- and explains why "they're a great metaphor for what America should be all about."

Yesterday afternoon, President Obama welcomed the San Antonio Spurs to the White House in honor of their 2014 NBA championship win, their fifth title in the past 15 seasons.

"This is an organization that has been marked by excellence -- one of the best in professional sports," the President said.

Admitting that he's a fan of his hometown Chicago Bulls, President Obama said it's "never easy celebrating a non-Bulls team in the White House," although the Bulls have yet to win a championship during his presidency. "Even I have to admit that the Spurs are hard to dislike," he added. 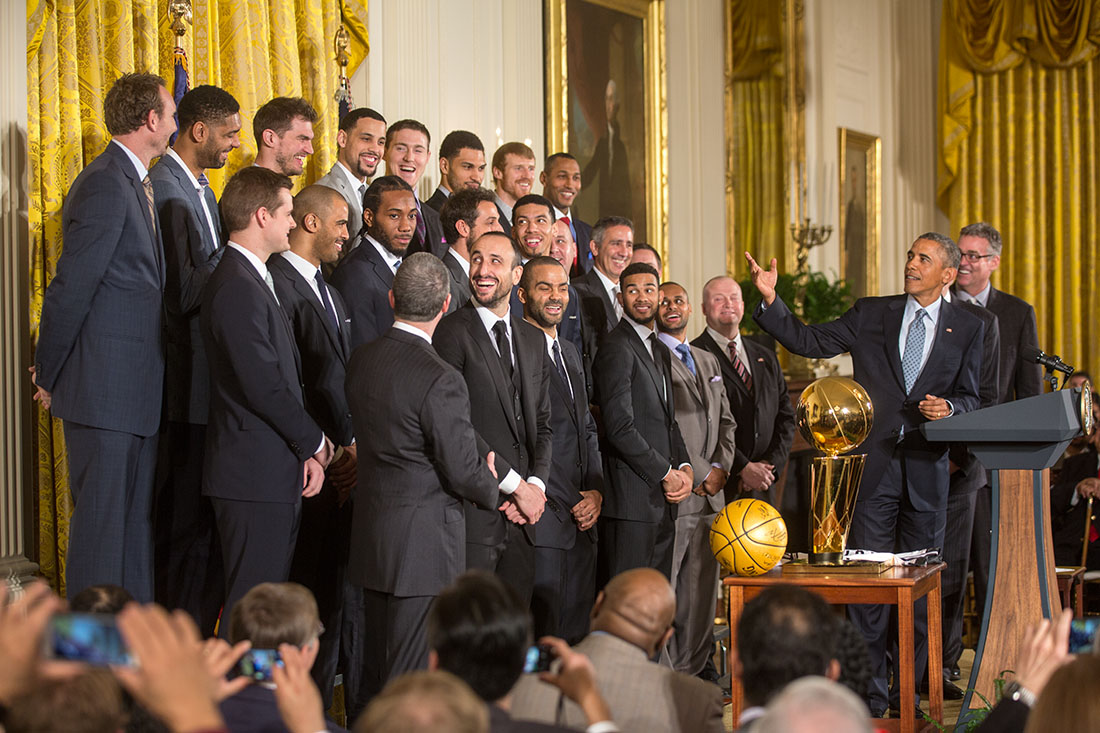 According to the President, one of the reasons he likes the Spurs is because, well, "they're old" -- making sure to point out the gray hair on Tim Duncan and a few other players on the team. "It makes me feel good to see that folks in advancing years can succeed in a young man's sport," the President said.

After calling the Spurs "the U.N. of basketball teams" -- they have an NBA-record 10 international players on their roster -- President Obama praised the team's style of basketball as "the beautiful game."

When you look at the passing and guys back-cutting the hoop and sharing the basketball, you see basketball the way it should be played.  And I was telling these guys you can now see everybody around the league actually stealing, first of all, assistant coaches who then become coaches and then start applying that style of play all around the league.  And it's made the game better.

On their road to the championship last season, the Spurs finished the regular season with a league-best 62-20 record, including a franchise-record 19-game winning streak. They carried that success into the playoffs, making it back to the NBA Finals and demolishing the Miami Heat in five games, winning by an average of 14 points, making it the most lopsided margin in Finals history. 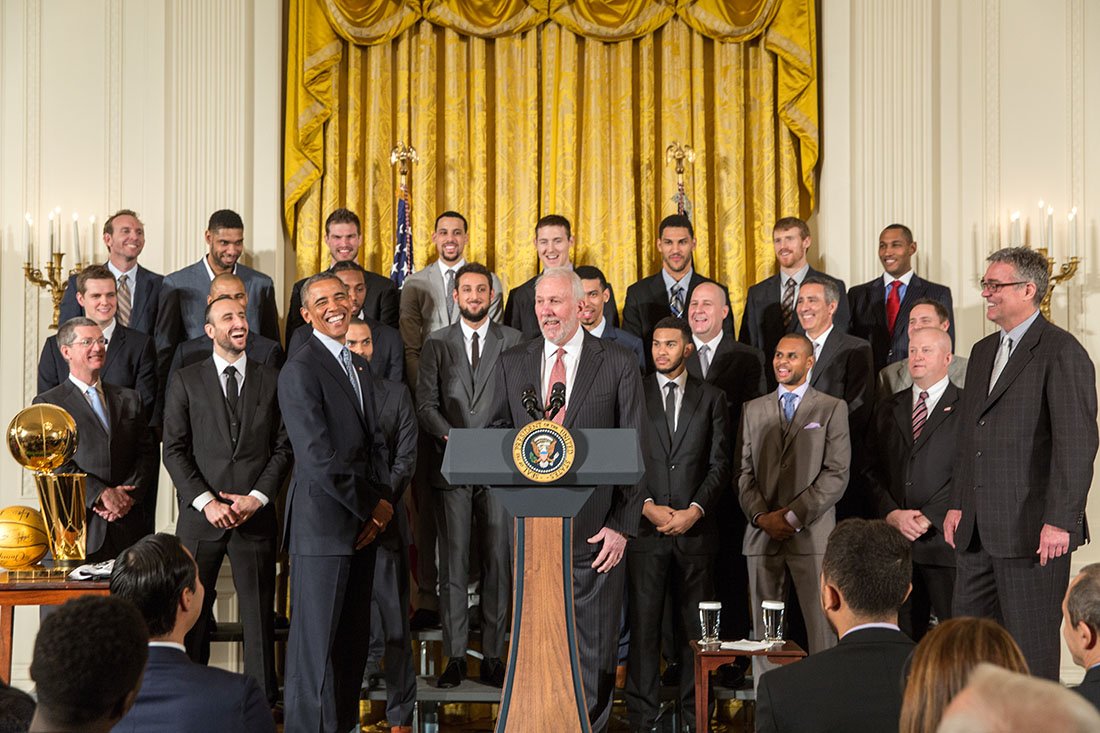 But as the President also noted, the team's strength isn't limited to just the basketball court:

Coach [Gregg] Popovich has helped the San Antonio Food Bank raise millions of dollars.  The Spurs honor our troops and our veterans and their families with camouflage uniforms and discounted tickets.  And earlier today, they met with some of our wounded warriors from Walter Reed and Fort Belvoir.

And they’ve been outstanding supporters of San Antonio’s East Side -- an area I designated as a Promise Zone.  They’ve created literacy programs, bought tablets and computers for schools.  Spurs staffers have served as mentors for young people. So they’ve been leading in the community; they’ve been in leading in terms of style of play.

President Obama also commended the Spurs for hiring former WNBA star Becky Hammon as an assistant coach, making her the first female full-time assistant coach in NBA history. "As somebody who has got two daughters, one of whom is a baller, it makes me feel good when excellence is recognized regardless of gender," the President said.

So that’s what the Spurs do -- they find ways to put together the best team, whether that means going to Australia or Italy or the WNBA.  They want everybody on the court.  They think everybody has worth.  They find folks who didn’t have a chance someplace else and suddenly they figure out a way to make them shine as part of a team.

"And in that sense," he said, "they're a great metaphor for what America should be all about."

Referencing his 2008 and 2012 election victories, the President was sure to let them know that if they "need any tips on winning back-to-back, you know where to find me." 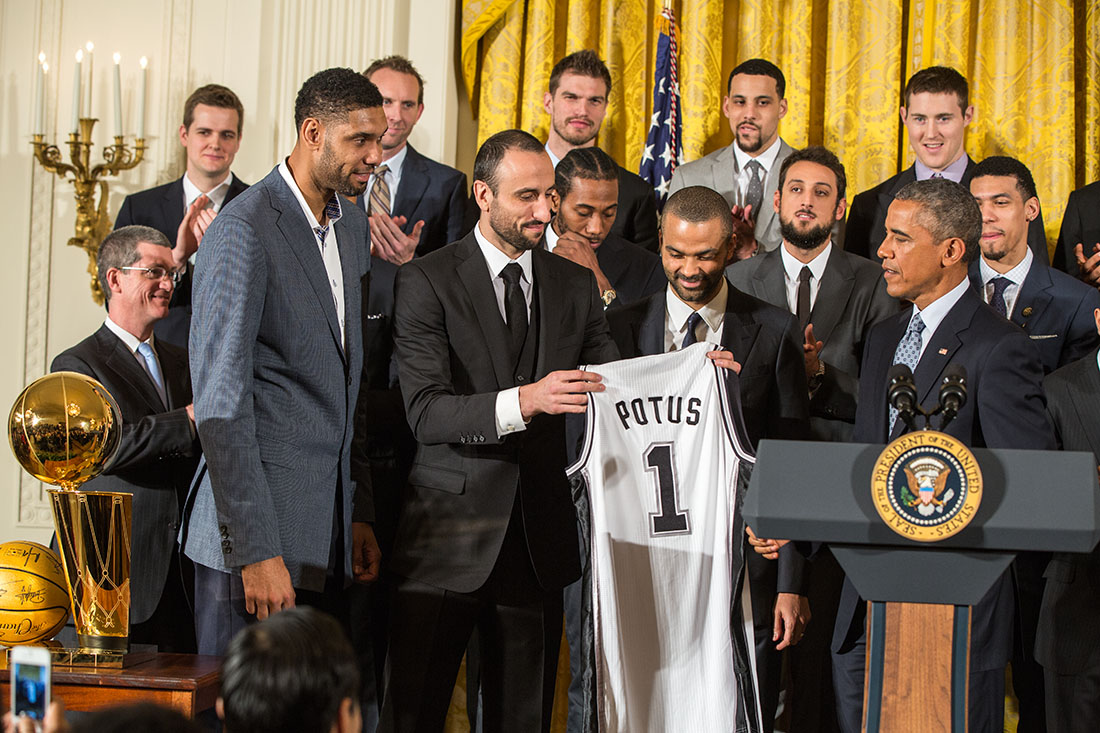