January 13, 2015 at 9:43 AM ET by Charles Bolden
Twitter Facebook Email
Summary:
On Saturday, NASA kicked off the New Year in a spectacular way with the launch of SpaceX's latest cargo resupply mission to the International Space Station (ISS). On Monday, the Dragon capsule arrived at the orbiting laboratory with more than two tons of supplies and science investigations for the crew in orbit. The success of this misson highlights how our investment in commercial space is bringing tangible benefits to the American people and enabling NASA to focus on future missions to deep space – to asteroids and Mars.

On Saturday, we kicked off the New Year in a spectacular way. SpaceX launched its latest cargo resupply mission to the International Space Station (ISS), the first American commercial flight to the ISS in 2015. This morning, the Dragon capsule arrived at the orbiting laboratory with more than two tons of supplies and science investigations for the crew in orbit. Our investment in commercial space is bringing tangible benefits to the American people and enables NASA to focus on future missions to deep space – to asteroids and Mars. 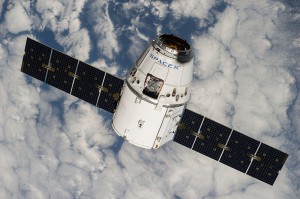 Thanks to SpaceX and Orbital Sciences – our two commercial cargo partners – we’ve returned Space Station resupply launches to U.S. soil. We’re now poised to do the same with the transport of our astronauts to the space station by SpaceX and The Boeing Company in the coming years – targeting 2017 as the inaugural year for commercial crew missions.

Today’s arrival of the SpaceX Dragon spacecraft not only

resupplies the Station, but also delivers important science experiments and increases the Station’s unique capabilities as a platform for Earth science with the delivery of the Cloud-Aerosol Transport System, or CATS, instrument.

This launch also illustrates how SpaceX recognizes that technology drives exploration. The company has made great strides in returning first stage elements to a barge positioned down range. Being able to return a launch vehicle in a controlled manner back to Earth right now is another example of how technology can inform launch capabilities.

On Saturday, SpaceX succeeded in returning the Falcon 9’s first stage to an ocean platform, even though some systems didn’t work. As the company’s CEO, Elon Musk, tweeted Saturday morning, “Close, but no cigar this time. Bodes well for the future tho [sic].”

NASA’s use of commercial companies to send and retrieve our cargo from space, to manage the payloads on the space station and to eventually transport our astronauts has fueled jobs and entire industries. As President Obama has said, “For pennies on the dollar, the space program has improved our lives, advanced our society, strengthened our economy, and inspired generations of Americans.”

As we set our sights on 2017, we’re looking forward to working with Boeing and SpaceX on the renewed capability to launch American astronauts from U.S. soil, ending our nation’s sole reliance on Russia for such transportation.

I congratulate the SpaceX and NASA teams who made Saturday’s success possible. We look forward to extending our efforts in commercial space to include commercial crew transport to the Space Station by 2017 and to more significant milestones this year on our journey to Mars.

Charles Bolden is the Administrator of NASA.