Enhancing the 2015 State of the Union: Announcing Our "River of Content"

January 19, 2015 at 8:15 PM ET by Nathaniel Lubin
Twitter Facebook Email
Summary:
We're putting out a whole new stream of supporting material for the State of the Union at WH.gov/SOTU. We’re calling it our “river of content." Check it out!

We’re constantly on the lookout for new ways to use digital channels to better engage with the public and give people a way to participate and interact with President Obama. Since 2011, a big part of that has been the "enhanced" version of the President’s State of the Union address, adding charts and graphics to give a deeper look at why policies are pursued, and what they mean for the American people. The format has improved over the years, including last year’s page which incorporated a real-time "tweetserver" that enabled users to share content in real time.

This year, we've been hard at work -- and tomorrow, we'll be rolling out a whole new stream of supporting material at WH.gov/SOTU. We’re calling it our “river of content." In addition to the enhanced livestream that features graphics augmenting the speech, the river will provide a series of discrete pieces of content, or "boats," that showcase expanded, standalone views into Administration policy -- often with an interactive or personalized component. It’s part of an effort to make policy more specific and interesting, and more relevant to the people who will be affected.

So what does the river mean for users? Well, it means you'll be able to see state-by-state or demographic data points in real-time. You'll be able to answer questions and respond to prompts, share feedback, discover related material, and see and share social media content. You'll generally get the kind of real-time experience usually reserved for sports events and technology company product demos -- and that content will all flow onto the page while you’re watching the speech. If it's not clear, we're pretty excited about it.

The whole experience has been built using a responsive design, meaning it will work equally well on a desktop, tablet, or mobile device. The river can serve as a viable second-screen view for users who want to close the livestream and use the page while simultaneously watching on TV. We've also improved accessibility this year, including real-time captioning in both English and Spanish. 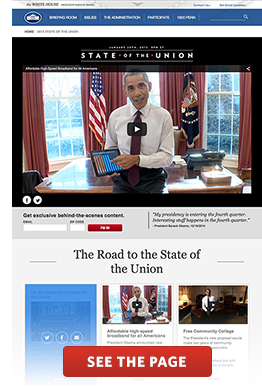 You can get an early look at the page right now at WH.gov/SOTU, where you can tune in at 9 p.m. ET on Tuesday to watch the President live, and see the new enhanced features. Then stay tuned after the speech for a live interview from the White House with senior Administration officials conducted by Huffington Post Politics.

For those who want to dive into the technical side, we’re building the new tools with "websocket" technology. Websockets use a back-end connection to users' browsers to "push" content as we publish, rather than asking browsers to repeatedly "pull" content. As a result, we can deploy material in real time, during the speech, without jeopardizing the performance or security of our platform. We’ve also reincorporated tools that we used last year to new effect, including an implementation of Twitter’s API (Tweet Fetch) to curate a custom real-time social media feed.

Of course, the new SOTU live page is only one way we’re using digital tools to engage with the public during this year’s State of the Union. Over the last few weeks, the President has announced a series of policies he’ll be pursuing in the year ahead via digital platforms, including the President’s announcement about free community college (which was filmed from Air Force One), improving access to broadband Internet (featuring the President’s iPad), and creating fairer paid leave policies (released first on LinkedIn).

Then later this week, you can ask Administration officials your questions about the State of the Union at our second-ever, virtual Big Block of Cheese day. And then tune in on Thursday when the President is interviewed by three YouTube content creators asking questions crowdsourced from the public.

Have feedback for how we can keep getting better at communicating with the public? Let us know here.

The State of the Union 2015: Everything You Need to Know:

Former Director for the Office of Digital Strategy