Meet Malik Bryant, a Guest of the First Lady at the State of the Union

January 19, 2015 at 7:15 AM ET by David Hudson
Twitter Facebook Email
Summary:
Malik Bryant is joining the First Lady as a guest at the 2015 State of the Union address.

Malik Bryant is joining the First Lady as a guest at the 2015 State of the Union address on January 20. Watch it live at 9 p.m. ET at WhiteHouse.gov/SOTU. 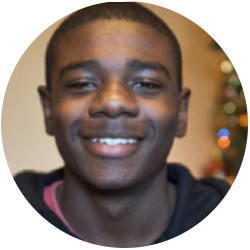 A lot of kids write letters to Santa Claus when December rolls around, telling him what they want to see under the Christmas tree on December 25. They'll often ask for new toys, video games, clothes, or even pets.

But this past Christmas, 13-year-old Malik Bryant from Chicago wrote Santa with a very different request.

Malik's neighborhood of Englewood has one of the highest rates of violent crime in Chicago. In an interview with the Chicago Sun-Times, Malik's mother explained how he isn't always able to leave his house and go hang out with his cousins, "because he has to cross gang lines and walk past all these gang members on some of those blocks. And all he ever hears on the news about our neighborhood is shootings, gangs and violence."

When a local non-profit organization came across Malik's letter, they did everything they could to get it to the White House. And they were successful: A couple of days after Christmas, Malik received a letter in the mail, signed by President Obama.

In his reply, the President told Malik that his "security is a priority for me in everything I do as President." He also encouraged Malik, telling him that "If you dare to be bold and creative, work hard every day, and care for others, I'm confident you can achieve anything you imagine. And I will be rooting for you."