January 21, 2015 at 3:52 PM ET by Chris Evans
Twitter Facebook Email
Summary:
A day after the President delivered his sixth State of the Union address, the White House is opening up and answering your questions. In our second annual Big Block of Cheese Day, Cabinet Officials, Administrators, and other White House Officials are sitting down to answer your questions.

On February 22, 1837, President Andrew Jackson had a 1,400-pound block of cheese hauled into the main foyer of the White House for an open house with thousands of citizens and his staff, where they discussed the issues of the day while carving off slabs of cheddar.

Here at the White House, we're dedicated to making President Obama's administration the most open and accessible in history. That's why, for the second year in a row, we thought it'd be a gouda idea to bring back this long-standing tradition.

So today, for the second-annual virtual Big Block of Cheese Day, White House officials have been spending their day on social media to directly answer your questions using the hashtag #AskTheWH.

Here's What The Nation Has Been Asking:

.@JWikelski-a lib'l arts education means being well-rounded. Following your passion and deep thinking will put you in good stead #AskTheWH

.@DanaKkP POTUS supports HealthyFamiliesAct which wld give employees paid sick days for their own illness/preventative care or for sick fam

Secretary of the Interior Sally Jewell 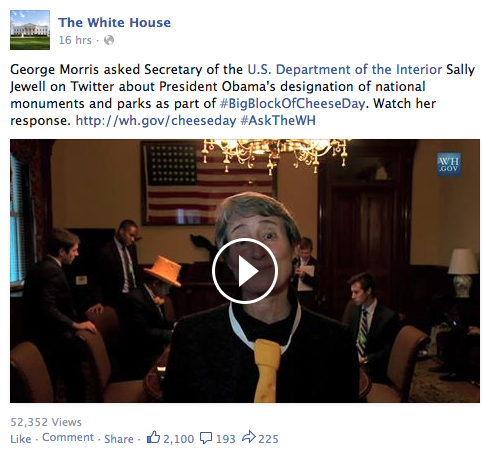 .@elena_bjj Love all NPs & see them when I can - nature, culture, history - it's all there. Gotta love my home mtn-Rainier :>) SJ #AskTheWH 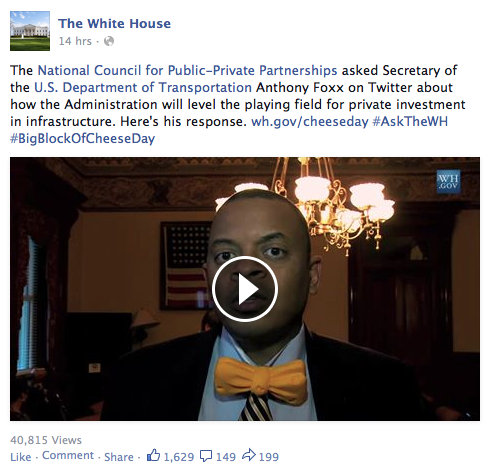 .@ConnorGodd @USDOT Learned a lot from Hurricanes Katrina and Sandy and we're now applying best practices in resiliency where possible. 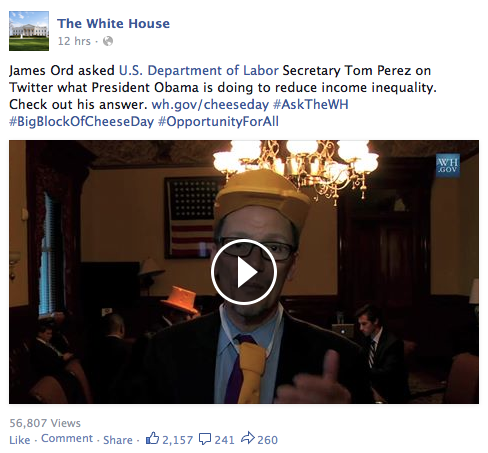 .@jobseeker2015 there are 2,500 American Job Centers around the country and one in your neighborhood. http://t.co/5Ze2nYEEKm #AskTheWH

.@ShopFloorNAM as the big 3 auto recovery demonstrated, when unions & biz work together, they succeed together. #AskTheWH #SharedProsperity

Counselor to the President, John Podesta

The future is NOW @Ern_tod. Wind power has tripled and energy from the sun as increased more than tenfold #AskTheWH #ActOnClimate

.@GeorgeMo POTUS has protected >260m acres of lands and waters as monuments—and there's still ink in his signing pen pic.twitter.com/1UurKsyCPR

.@Coach_Carder US has reduced role of nukes in our strategy and is reducing to New START levels. Modernization maintains deterrent #AskTheWH

.@MCHadley Yes. Here's a place you can go to get support on federal loans. https://t.co/xcjfj0CoLo #AskTheWH

Yes! @Euclidean84 less than a year after start of Obamacare, overall Latino uninsured rate dropped from 36% to 23% http://t.co/fScWujOCYO

.@Latinovations More Latinos are already enrolled in college than ever before nearly half attend a public 2-yr school pic.twitter.com/eZbiXVDf1K

.@ralfamador these changes will empower the Cuban people so theybecome less dependent upon the state-driven economy http://t.co/adERUQlRbp

.@miami_rj the President believes we need to make sure all Americans have the skills needed to succeed in 21st century economy #AskTheWH

.@CoachTaylorBMMS Yes, that is why we now have higher fuel standards in our cars. pic.twitter.com/RAGyAFCLpy #sotu #AskTheWH

.@CDMitch6 rumor has it Pres Jackson used cheddar. Today, we'll go for gouda puns and try to make it even feta than Jacksons #AsktheWH

.@AZoellick We're thrilled that 10 million Americans have insurance that didn't b4, & millions more have feta coverage because of the #ACA!

.@deboraberas many steps have been taken on immigration, details here: http://t.co/QgFfKxguvI but more can be done by Congress! #AsktheWH

Deputy Director of the Office of Management and Budget, Brian Deese

@CoachTaylorBMMS Only Cong. can pass fed min wage; they should now. States & cities can pass increases; businesses can act too #AskTheWH

.@DECA_greg Plastic pollution in our waters is a huge problem – but anyone can make a difference by reducing, reusing & recycling. #AskTheWH

.@WesCPE See how we're strengthening the quality of edu for an estimated 60K young people in confinement. #AskTheWH http://t.co/OwgPtfcNWg

.@nikkig5 Teacher voice is a must in the policy-making process! Visit http://t.co/Yq26ZuEiSm for more info on how to get involved #AskTheWH

.@tekstart Visit http://t.co/lo16yx99Zn for resources for educators, students & anyone who wants to learn more. #AskTheWH

Deputy Asst. to the President for Energy and Climate Change, Dan Utech

. @LexLex023 Communities can do a lot to prepare for climate threats -- check out our Climate Action Champions: http://t.co/YGt4cQ3ubz

You can learn more about the second annual Big Block of Cheese Day here. You can also get involved by checking out what's happening at the White House on Twitter, Facebook, or other social media platforms.