On December 3rd, President Obama hosted the 6th annual White House Tribal Nations conference where he announced Generation Indigenous (“Gen-I”), a new initiative focused on removing the barriers that stand between Native youth and their opportunity to succeed using a comprehensive, culturally appropriate approach.  In addition to leaders from the 566 federally-recognized Native nations, for the first time, 37 high-school aged “Gen-I” Native Youth Ambassadors were invited to engage with the President, Vice President, and Cabinet Officials representing the White House Council on Native American Affairs on key issues facing tribes. The Conference built on the President’s visit to the Standing Rock Sioux Indian Reservation in June, during which he and First Lady Michelle Obama met with a group of Lakota young adults and learned about the obstacles and problems they had experienced resulting from substance abuse, violence and other poverty-related issues.

Through “Gen I”, the Youth Ambassadors represented the voice of Native youth at the Conference by joining with tribal leaders in breakout sessions and panels and participating in leadership development programming. Click here to learn more about Gen-I! The 2014 Youth Ambassadors came from across the country, from Alaska to North Carolina, and are an inspiring group with big plans for making a positive impact in their communities.  Over the course of their trip to D.C., they participated in exciting events in advance of the Conference, including a White House screening of MTV’s riveting Rebel Music: Native America premiere episode followed by a panel discussion including Rebel Music creator Nusrat Durrani and Lakota rapper Frank Waln and a signing ceremony for a new MOU between the Indian Health Service and Nike N7, which included a visit with 2014 FIFA World Cup Kiowa soccer player Chris Wondolowski.  Several of the Ambassadors were featured in a new MTV video “Meet Generation Indigenous” that followed two of the youth on their inspiring journey from their home communities to Washington, D.C.

The MTV Gen-I video featured young leaders like Youth Ambassador Dahkota Brown of the Wilton Band of Miwok Indians and Janay Jumping Eagle of the Oglala Sioux Tribe.  Dahkota founded the organization Native Education Raising Dedicated Students (NERDS), which aims to decrease the dropout rate of Native youth by giving Native students a safe, helpful and healthy place to do their homework. Janay is also actively speaking out about suicide and dedicated her most recent basketball season to at risk youth.

As the youth reflect on their experience at the Tribal Nations Conference, they are more inspired and motivated than ever before to create positive change in their communities.  One of those students is Rory Wheeler of the Seneca Nation of Indians who said he’s “honored to serve as a founding member of Generation Indigenous and plan[s] on doing great things to enhance the lives of Native Youth across Indian Country.” Or Darius Jackson from the Gila River Indian Community who said the conference was “the highlight of [his] life so far.” And Kelsey Janway of the Choctaw Nation of Oklahoma who said that, as Ambassadors, “We’re going to be those people who make the difference.”

All of the 2014 Youth Ambassadors are incredibly impressive and will continue their work with the Administration and non-federal partners to help sculpt and support the “Gen-I” Initiative.  We would like to thank each of them for setting a positive example and being a force for good in their communities. 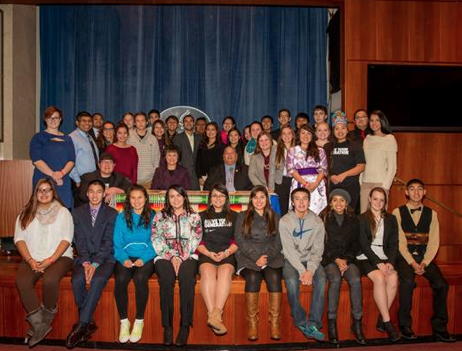 December 3, 2014. (by Photo courtesy of the Indian Health Service)