January 28, 2015 at 2:42 PM ET by Kiran Ahuja
Twitter Facebook Email
Summary:
As soon as the Health Insurance Marketplace opened in October 2014, Peter jumped at the opportunity to get health insurance. He was one of the first to sign up and purchased a platinum-level Point of Service plan with the lowest deductible available to him. 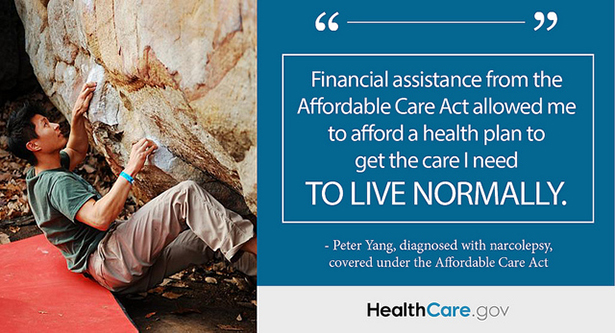 As a college student, studying is par for the course. However, when Peter would head to the library to study, he found himself overwhelmed by feelings of drowsiness. Finally, after talking to a friend and learning about sleep disorders in a class, Peter called a nearby sleep specialist to ask for help. He was invited to participate in a sleep study and in his senior year in college, was diagnosed with narcolepsy.

At the time, Peter was insured through his college and was able to see a specialist to help with his condition. But after graduating, he lost his insurance and the ability to pay for the medication that allowed him to function normally. All of the major providers denied him coverage because of his pre-existing condition and he could no longer afford to see his specialist.

Peter’s narcolepsy began to significantly inhibit his day-to-day activities because of constant somnolence. The medication he needed cost $1,500 each month. During this period, he also dislocated his shoulder while rock climbing. His first thought was, “Oh no! I don’t have health insurance!”

As soon as the Health Insurance Marketplace opened in October 2014, Peter jumped at the opportunity to get health insurance. He was one of the first to sign up and purchased a platinum-level Point of Service plan with the lowest deductible available to him. He also qualified for tax credits, which helped bring the monthly cost down to an affordable level. His coverage began on January 1, 2014 and the first thing he did was get his dislocated shoulder looked at and learn how to better care for his injury.

He also went back to the sleep specialist to get his narcolepsy back under control. He now has a $35 copay for each visit and pays $10 each month for the medication he needs. Now that Peter has access to care, he no longer falls asleep randomly, especially when driving.

Peter recalls, “I realized, you never really know what you’re missing until you get it back. Once you understand what it is you have access to, lose it, and then regain it, you realize what a risk you’re taking when you don’t have access to health coverage.” Now, Peter works at the Center for Pan Asian Community Services in Atlanta, GA helping others sign up for health insurance.

The deadline to enroll in the Health Insurance Marketplace is February 15, 2015. And, like Peter, you might find that you are eligible for financial assistance! In fact, 8 out of 10 people can find coverage for $100 or less a month with tax credits through the Marketplace. So why wait? Visit HealthCare.gov or call 1-800-318-2596 and #GetCovered today!