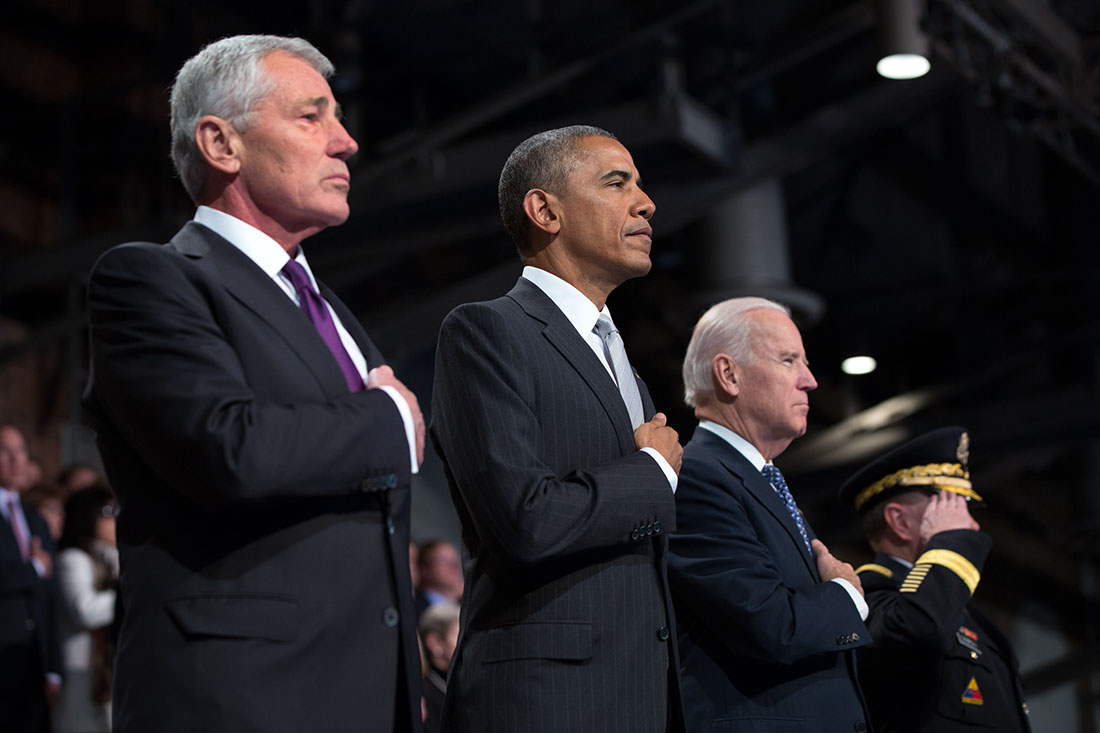 The President traveled to Fort Myer, Virginia yesterday for the Armed Forces farewell ceremony in honor of our 24th Secretary of Defense, Chuck Hagel.

In his remarks, the President acknowledged Secretary Hagel's courageous work during his lifelong service as a decorated veteran and Secretary:

[T]oday is a celebration of a quintessentially American life -- a man from the heartland who devoted his life to America. Just imagine, in your mind’s eye, the defining moments of his life. The kid from Nebraska who, as Marty said, volunteered to go to Vietnam. The soldier outside Saigon, rushing to pull his own brother from a burning APC. The deputy at the VA who stood up for his fellow Vietnam vets who were exposed to Agent Orange. The senator who helped lead the fight for the Post 9/11 GI Bill, to give this generation of heroes the same opportunities that he had.

I asked Chuck to lead this department at a moment of profound transition. And today we express our gratitude for the progress under his watch.

Under Secretary Hagel's direction, our combat mission in Afghanistan has come to an end after more than 13 years. American troops are supporting Afghan forces, leading the coalition to degrade and destroy ISIL, and leading the global fight against Ebola.

And as the President noted, Secretary Hagel has also helped prepare our nation for the future:

In Europe, a stronger NATO is reassuring our allies.  In the Asia Pacific -- one of my foreign policy priorities -- Chuck helped modernize our alliances, strengthen partnerships, bolster defense posture, improve communication between the United States and Chinese militaries -- all of which helps to ensure that the United States remains a strong Pacific power.

Because Chuck helped build new trust, we’ll expand our defense cooperation with India.  I just demonstrated during my visit there the degree to which that partnership is moving in a new direction.  That's partly attributable to work that Chuck did.

And the reforms he launched will help make this department more efficient and innovative for years to come.

"Thanks to Secretary Hagel's guiding hand, this institution is better positioned for the future." 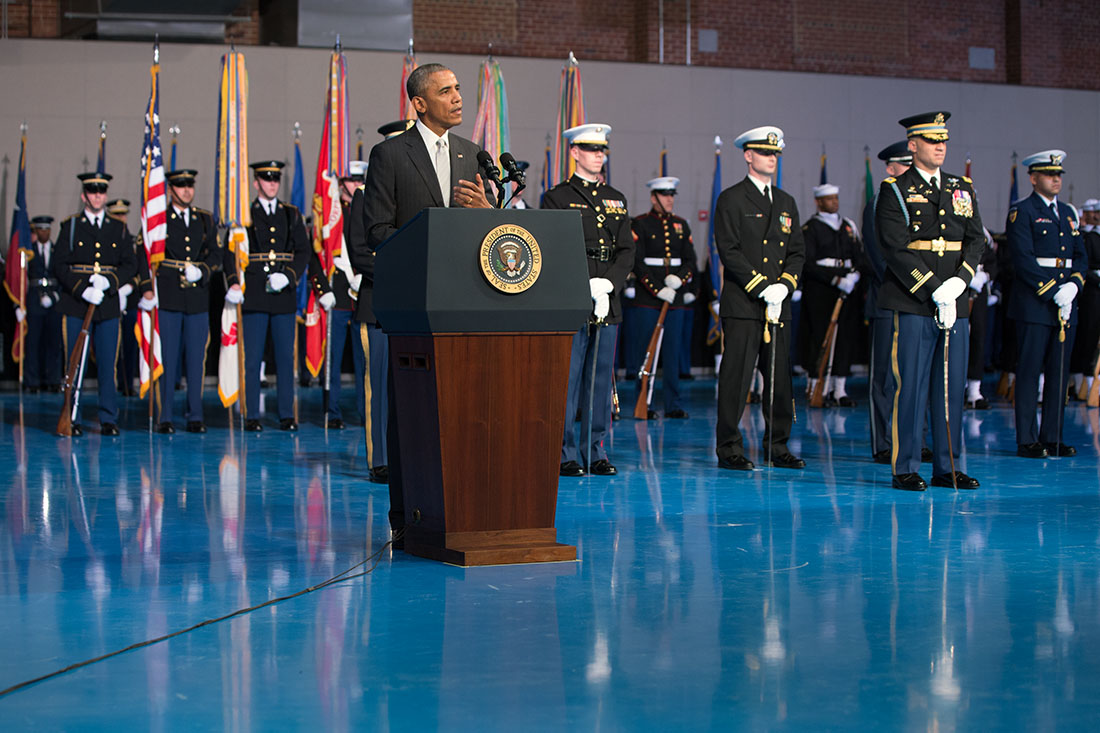 Before he closed, President Obama expressed his personal admiration for Secretary Hagel's character, explaining how his personal experiences have helped him connect with the troops like no other Secretary:

Chuck, I want to suggest today that perhaps your greatest impact -- a legacy that will be felt for decades to come -- has been your own example. It’s not simply that you’ve been the first enlisted combat veteran and the first Vietnam veteran to serve as Secretary of Defense. It’s how your life experience -- being down in the mud, feeling the bullets fly overhead -- has allowed you to connect with our troops like no other Secretary before you.

You’ve welcomed our junior enlisted personnel to lunch in your office and made them feel at home, and they told you what was really on their minds. When you spoke to our newest sergeant majors about the true meaning of leadership and responsibility, they knew they were learning from one of their own. And in those quiet moments, when you’ve pinned a Purple Heart on a wounded warrior, you were there not just as a Secretary of Defense, but as an old Army sergeant who knows the wages of war and still carries the shrapnel in your chest.

"From sergeant to Secretary, you’ve always been guided by one interest: what you believe is best for America." 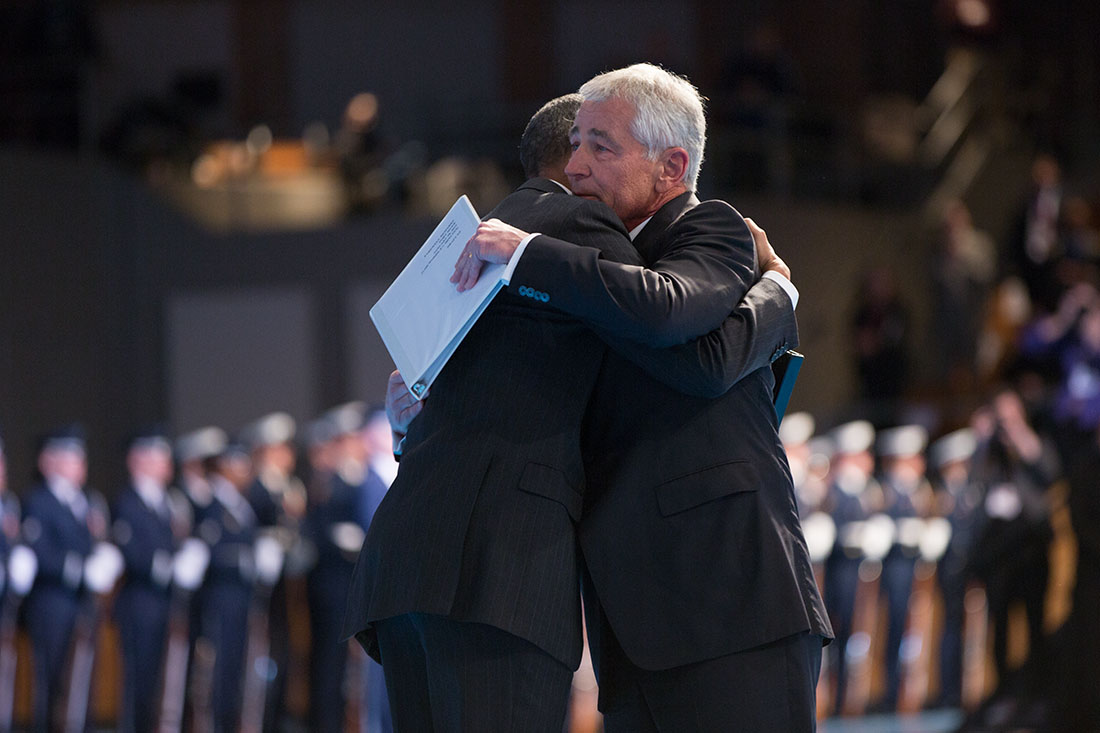 Read the President's full remarks here, or watch below: