January 29, 2015 at 2:51 PM ET by Jenn Gustetic and Sam Ortega
Twitter Facebook Email
Summary:
Earlier this month, more than 150 designers, engineers, technologists and explorers gathered at the NASA Ames Research Center in Palo Alto, California, for the Cube Quest Challenge Summit. The Summit kicked off a multi-faceted quest to compete for the opportunity to launch a small satellite – known as a CubeSat – into space and then continue in a race around the moon and beyond.

Earlier this month, more than 150 designers, engineers, technologists and explorers gathered at the NASA Ames Research Center in Palo Alto, California, for the Cube Quest Challenge Summit. The Summit kicked off a multi-faceted quest to compete for the opportunity to launch a small satellite – known as a CubeSat – into space and then continue in a race around the moon and beyond. Teams that best complete the tasks outlined in the prize rules could win up to $5 million. As one attendee at the event shared via social media, “#CubeQuest has that feel of early days of history in the making. Sitting among giants in the cubesat field!” 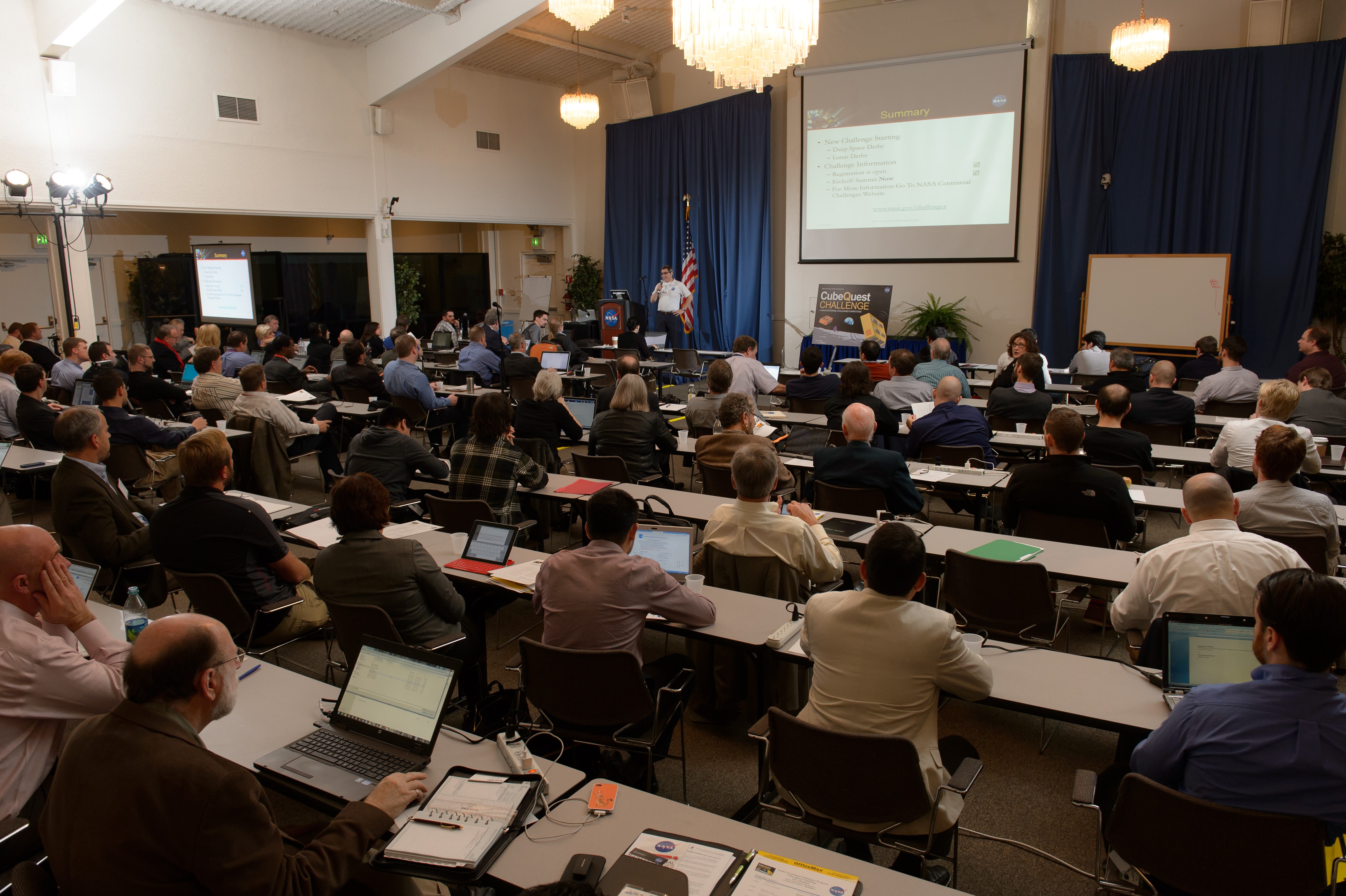 NASA’s Cube Quest Challenge is a great example of an ambitious prize that strives to drive national breakthroughs in science and technology. Since the authorization of its Centennial Challenges Program in 2005, NASA has been a leader in Federal technology development and demonstration prizes. The Centennial Challenges Program is part of NASA's Space Technology Mission Directorate, which solicits the help of the best and brightest minds in academia, industry, and government to drive innovation and enable solutions in important technology areas. The Cube Quest Challenge takes NASA’s challenges to a new level — literally out of this world — by including a chance for competitors to fly their very own CubeSat to the moon and beyond as secondary payload on the first integrated flight of NASA's Orion spacecraft and Space Launch System (SLS) rocket. This will be the first prize competition sponsored by the US Government where any portion has been conducted in space.

The challenge and prize purse are divided into three major areas:

The Obama Administration has taken steps to make prizes a standard part of every Agency’s toolbox, and to encourage Federal agencies to use prizes to drive national breakthroughs. In his September 2009 Strategy for American Innovation, President Obama called on all Federal agencies to increase their use of prizes to address some of our Nation’s most pressing challenges. Such efforts grew with the signing of the America COMPETES Reauthorization Act of 2010, which provided Federal agencies with expanded authority to pursue ambitious prizes with robust incentives. In fiscal year (FY) 2013, 25 Federal agencies conducted 87 prize competitions: a more than 85 percent increase from FY 2012.

Why CubeSats? Why now?

Small satellites are already being designed and tested for monitoring our own planet and solar system, providing atmospheric data, and other applications, but they are limited by their range and propulsion capabilities. The CubeSat platform offers an appealing combination of higher functionality and smaller hardware. A CubeSat that meets the goals of the Cube Quest Challenge would be able to travel farther, send data back more reliably, and have more control over its trajectory than current small satellites. These small satellites are pioneering technologies, able to scout new frontiers and test technologies before larger investments are made in more expensive missions. A larger CubeSat could conceivably transport a cluster of even smaller satellites and release them with a head start on a journey even farther into deep space. 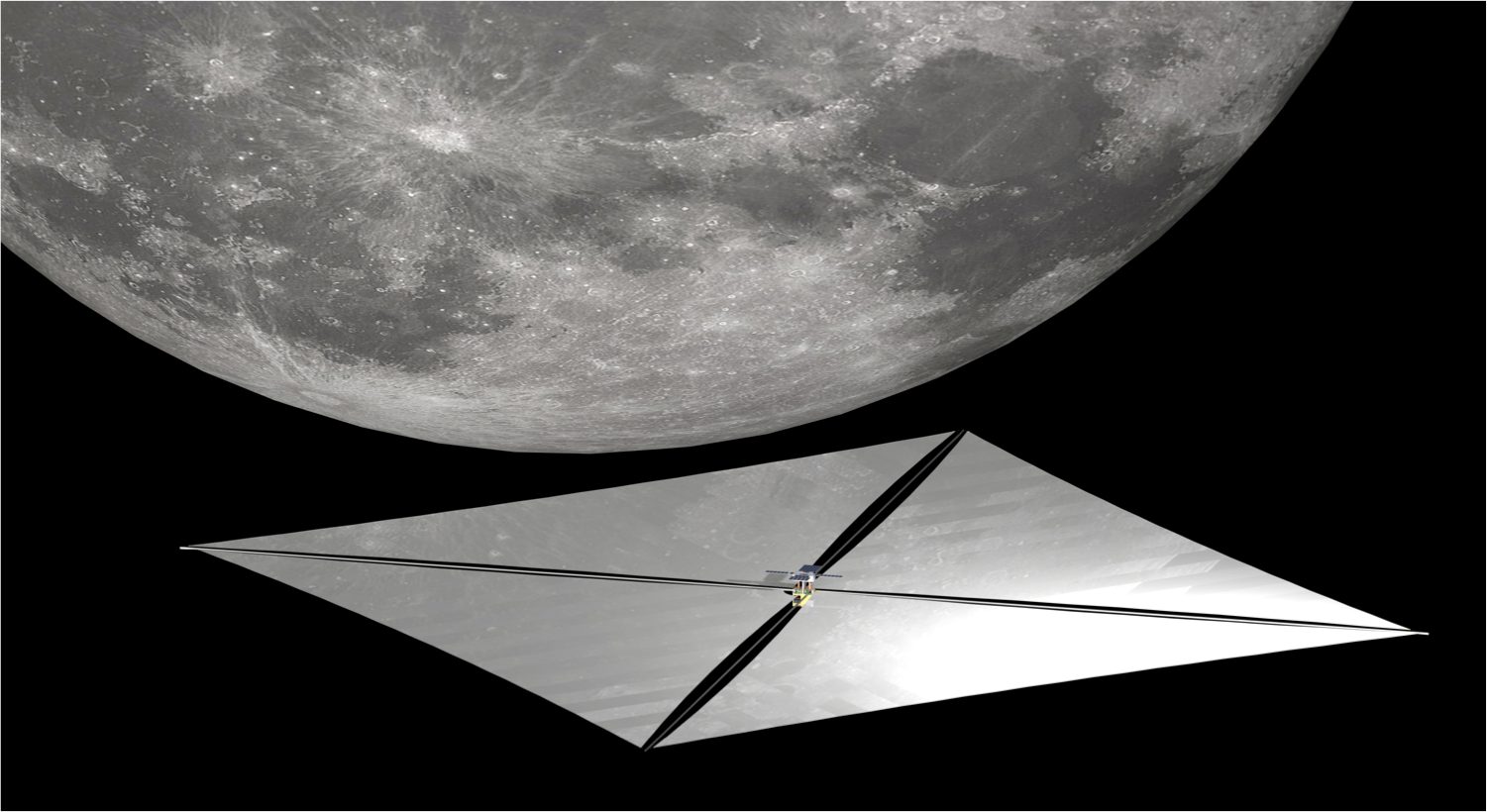 An artist rendering of the Lunar Flashlight, a new mission concept that will map the lunar south pole for volatile elements. It will be the first CubeSat to reach the moon and the first to use a solar sail as a reflector for science observations, among other accomplishments. The sail will provide navigation capability for the NEA Scout CubeSat, which will be launched along with the Lunar FLashlight on the Space Launch System's maiden voyage, EM-1. (Image: NASA)

Other NASA small-satellite programs are already underway. These include the CubeSat Launch Initiative, which seeks to launch at least one satellite from all 50 states in the next five years, and Advanced Exploration System’s Lunar Flashlight, which will map parts of the lunar South Pole. Cube Quest is one prong in a larger NASA strategy to enable CubeSats to provide enhanced benefits to future missions and facilitate entirely new mission scenarios, including future investigations of near-Earth asteroids.

Cube Quest is an important competition for both NASA and the commercial space sector. With more small companies building small spacecraft than ever before and more universities supporting labs that are capable of building these spacecraft, the time is ripe for a prize competition that supports emerging small-satellite companies and provides a level playing field for demonstrating new small-satellite technologies and capabilities. Furthermore, the comparatively low cost of creating small satellites makes participation in the challenge accessible to teams of makers and citizen inventors as well. This is truly a challenge for every space enthusiast in the United States, no matter what their profession or specialty.

The Office of Science and Technology Policy is actively working with Federal agencies such as NASA to build relationships through public prize competitions that leverage the expertise and passion that abounds in classrooms, garages and maker sheds. Cube Quest is just one example of the many Federal prize competitions that are helping incentivize development of breakthrough technologies and innovation.

May the best CubeSats win.

Sam Ortega is the Centennial Challenges Program Manager at NASA.