January 29, 2015 at 11:00 AM ET by Kiran Ahuja
Twitter Facebook Email
Summary:
Today, because of the Affordable Care Act, Kalwis is cancer-free and living a healthy life. 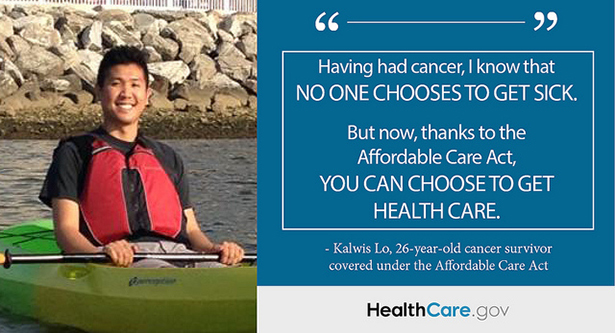 Said Kalwis, “I didn’t know at that moment that a year and a half later I would be benefitting from the very law that was passed that night.”

Kalwis’s family was uninsured, but as a college student, he had health coverage provided by the university. At school, Kalwis was focused on his studies and was involved in numerous student groups. Being so involved on campus, Kalwis did not notice the symptoms he was experiencing. He said, “I remember organizing and being a student leader on campus. It took a lot of my time, and I just thought that I was just tired and I wasn’t getting enough rest.”

But two months after graduation, he was no longer covered by his school’s health plan and his fatigue got worse. The summer after he graduated, he began to undergo medical testing. That August, he was diagnosed with stage 3 Hodgkin’s disease.

His nightmare got worse. His insurance provider denied coverage for the treatments he would need to battle his cancer because they considered it a “pre-existing condition.” Then, he was denied by every major health insurance company he applied to. As working-class Chinese Americans, his parents didn’t have much money but reached into their own savings to put him through medical testing and chemotherapy treatments. They asked friends and family for help to cover the cost of his care.

On National Youth Enrollment Day, Kalwis reminds us the importance of getting covered: