Advance Estimate of GDP for the Fourth Quarter of 2014

Economic growth in the fourth quarter was consistent with a broad range of other indicators showing solid improvement in the labor market, rising consumer sentiment, increasing domestic energy security, and continued low health cost growth. The combination of consumer spending and fixed investment grew at about the same strong pace as in the third quarter, while more volatile factors that elevated the overall growth rate in the third quarter subtracted from it in the fourth quarter. The President’s approach to middle-class economics, including the proposals he will release in his Budget on Monday, would build on this growth while helping to ensure that our recovery is widely shared with all American families.

1. Real gross domestic product (GDP) grew 2.6 percent at an annual rate in the fourth quarter of 2014, according to the advance estimate from the Bureau of Economic Analysis. The report reflects very strong consumption growth, continued increases in residential investment, weaker business investment after two quarters of strong growth, an unusually large decline in federal spending that reversed last quarter’s above-trend increase, and stronger imports, which while subtracting from GDP, partly reflect improved consumer sentiment. Overall, real GDP rose 2.5 percent versus the fourth quarter of 2013. Indeed, today’s report affirms the underlying pattern of resurgence in the economy. 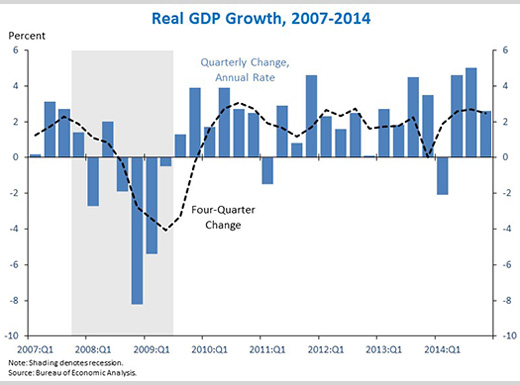 2. Real personal consumption expenditures, which constitute more than two thirds of GDP, grew 4.3 percent at an annual rate in the fourth quarter — the fastest single quarter since 2006. Consumption growth continues to trend upward as consumers’ economic optimism has reached its highest monthly level since 2004 and real wages have begun to rise. Consumers cite improved expectations for employment and wage increases — along with declining gasoline prices — as major drivers of improved economic optimism, according to the Reuters/University of Michigan consumer sentiment survey. In line with broadly improved sentiment, consumption growth in the fourth quarter was broad-based. Services spending grew at its fastest pace in a year, while the recent high growth rate of durable goods spending persisted and nondurable goods spending grew at its fastest pace in nearly two years. Although consumer sentiment has improved on average, many households still have yet to participate fully in the recovery, and we have more work to do to boost wages for middle-class families. 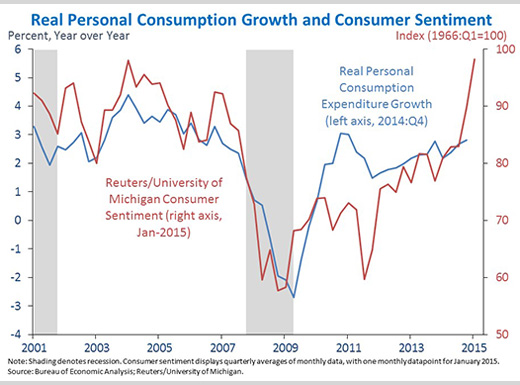 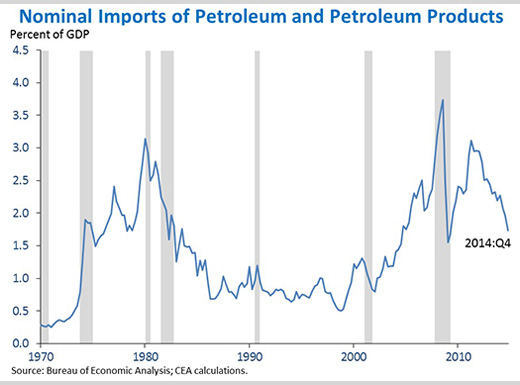 4. Despite the recent strength of U.S. growth, the global economy has slowed in recent quarters, which is contributing to the declines in oil prices, along with other factors. Weakness in global aggregate demand explains part of the oil decline, but it is unlikely to be the only contributor. Indeed, the decline in oil prices is comparable to that observed in 2008, even though unlike in 2008, the global economy has continued to record positive growth. Accordingly, expanded oil supply — including the growth in U.S. oil production and reduced U.S. consumption — has also contributed to declines in oil prices. But going forward, lower energy costs are likely to encourage short-term growth on a global basis and may help to mitigate the international slowdown. A continued slowdown in global growth would pose downside risks to U.S. net export growth. 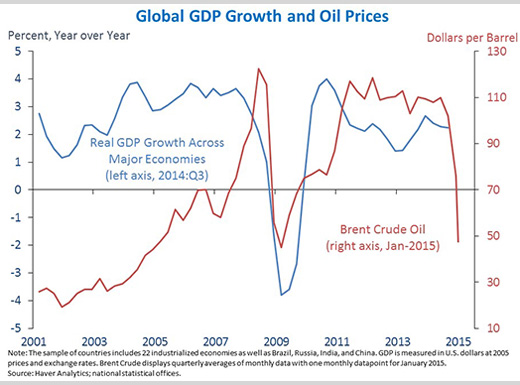 5. Real private domestic final purchases (PDFP) — the sum of consumption and fixed investment — rose 3.9 percent at an annual rate in the fourth quarter. PDFP growth in the fourth quarter was largely on par with PDFP growth in the third quarter, which was only 0.2 percentage points higher at an annual rate. Real PDFP growth is generally a more stable and forward-looking indicator than real GDP because it excludes volatile components like inventory investment, net exports, and government spending. The entire fourth-quarter deceleration in real GDP can be attributed to two of these volatile categories, net exports and government spending — two categories that boosted real GDP in the third quarter. As such, the underlying trends driving the economy’s performance were quite similar in the third and fourth quarters. Over the past four quarters, PDFP has risen at a 3.2 percent annual rate, a faster pace than real GDP. 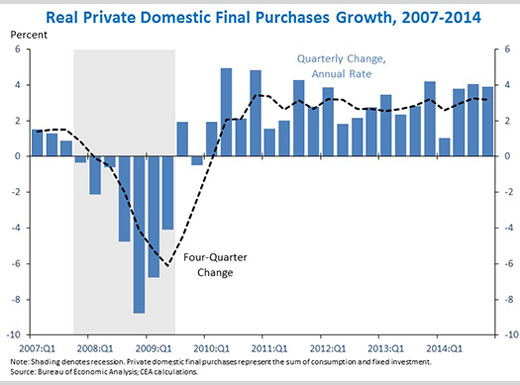