What Would Happen If House Republicans Actually Repealed the Affordable Care Act?

February 3, 2015 at 5:57 PM ET by Tanya Somanader
Twitter Facebook Email
Summary:
Here's what the House Republicans' incessant attempts to repeal or undermine the Affordable Care Act would mean for millions of Americans. 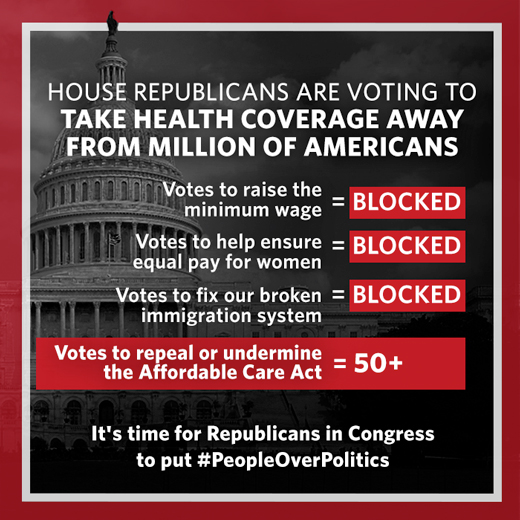 Given the sheer number of times House Republicans have tried to repeal this historic legislation, you may be wondering: What would happen if they actually succeeded?

HERE'S WHAT ELIMINATING THE AFFORDABLE CARE ACT WOULD MEAN:

Millions of Americans could lose coverage because they can't afford it

Here's why: Thanks to the Affordable Care Act, we've reduced the number of uninsured by about 10 million people, In the Marketplace, nearly 8 in 10 consumers can find coverage for $100 or less after tax credits. The House Republican repeal would eliminate those tax credits, leaving millions with the problem they faced before the ACA: unaffordable coverage.

Millions more could lose their coverage under Medicaid

Here's why: Under the ACA, 28 states and D.C. have expanded Medicaid. Medicaid now covers over 10 million additional Americans compared to the fall of 2013. Rolling back the expansion would leave millions of low-income Americans and children without the coverage.

Here's why: Before the ACA, many insurance companies enforced lifetime limits -- a dollar limit on what they would spend for your covered benefits during the entire time you were enrolled in that plan. The ACA prohibits those limits. If repealed, 105 million Americans, including nearly 60% of those with employer-based coverage, could see the return of caps on their coverage.

Here's why: The ACA even improved coverage for Americans who already had insurance, expanding access to preventive services at no out-of-pocket cost. The Republicans' repeal would cost 76 million Americans their eligibility for expanded preventive services -- including 30 million women and 18 million children.

Consumers would lose billions in savings

Here's why: Since 2011, consumers have saved $9 billion due to the law's requirement that insurance companies spend at least 80 cents of every dollar on consumers' health care and empowers states to review and negotiate premium increases.

This is not the health care system Americans want to return to.

For all their votes to repeal or undermine the Affordable Care Act, House Republicans have failed to offer a single alternative. Instead, they'd just throw millions of Americans like April W. back into the uncertainty of life without health coverage: 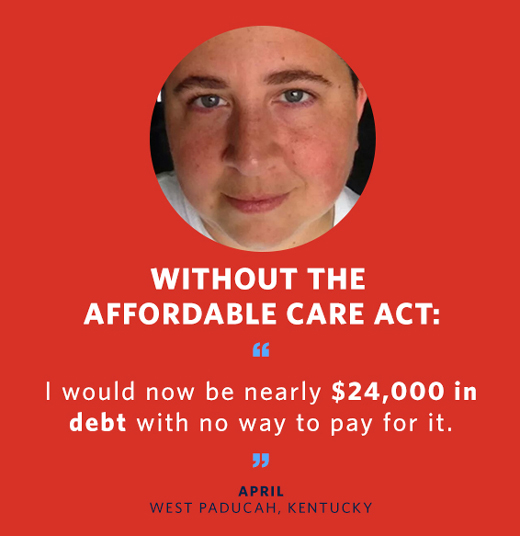 Read more about the people House Republicans have chosen to ignore in their attempts to repeal a law that is literally saving lives.

Then, if you or someone you know needs insurance, head over to HealthCare.gov by February 15 to find a plan that best suits your needs.