Continuing a longstanding tradition among U.S. presidents, President Obama headed to the Washington Hilton this morning to speak at the National Prayer Breakfast.

Every President since Dwight D. Eisenhower has attended the annual breakfast since it started in 1953, and today marked the President's seventh appearance. Also in attendance this morning was the Dalai Lama, whom the President lauded as "a powerful example of what it means to practice compassion," and someone "who inspires us to speak up for the freedom and dignity of all human beings."

At the top of his remarks, President Obama noted how the breakfast provides a time to slow down and pause for fellowship and prayer -- which is especially necessary in the rush of D.C. life -- and gives him an opportunity to reflect on his own faith journey. "He’s certainly strengthened me 'with the power through his Spirit,' as I’ve sought His guidance not just in my own life but in the life of our nation," the President said.

"For 63 years, this prayer tradition has brought us together, giving us the opportunity to come together in humility before the Almighty and to be reminded of what it is that we share as children of God."

The President went on to explain how, although faith is constantly inspiring people to help others across the world, it is being "twisted and distorted" by some who use it as a wedge and sometimes as a weapon:

From a school in Pakistan to the streets of Paris, we have seen violence and terror perpetrated by those who profess to stand up for faith, their faith, professed to stand up for Islam, but, in fact, are betraying it. We see ISIL, a brutal, vicious death cult that, in the name of religion, carries out unspeakable acts of barbarism -- terrorizing religious minorities like the Yezidis, subjecting women to rape as a weapon of war, and claiming the mantle of religious authority for such actions.

We see sectarian war in Syria, the murder of Muslims and Christians in Nigeria, religious war in the Central African Republic, a rising tide of anti-Semitism and hate crimes in Europe, so often perpetrated in the name of religion.

As he made clear, however, this problem is not new to our time. Looking back throughout human history, there are countless examples of abhorrent acts being committed in the name of faith and religion:

Lest we get on our high horse and think this is unique to some other place, remember that during the Crusades and the Inquisition, people committed terrible deeds in the name of Christ. In our home country, slavery and Jim Crow all too often was justified in the name of Christ. Michelle and I returned from India -- an incredible, beautiful country, full of magnificent diversity -- but a place where, in past years, religious faiths of all types have, on occasion, been targeted by other peoples of faith, simply due to their heritage and their beliefs -- acts of intolerance that would have shocked Gandhiji, the person who helped to liberate that nation.

"This is not unique to one group or one religion," the President said. "There is a tendency in us, a sinful tendency that can pervert and distort our faith." 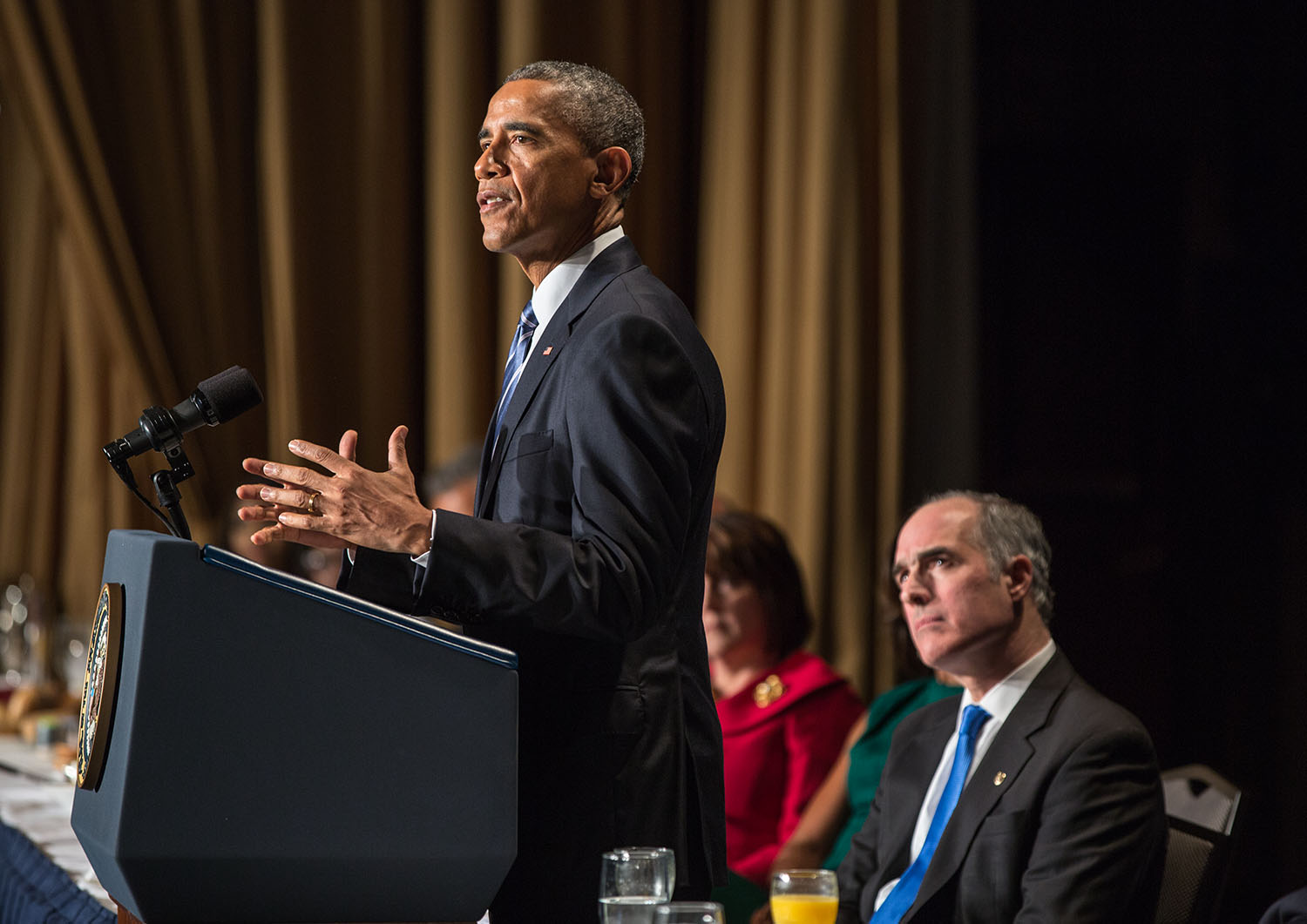 He added, however, that God compels all of us to try to counteract this intolerance, and laid out three guiding principles:

Our job is not to ask that God respond to our notion of truth -- our job is to be true to Him, His word, and His commandments. And we should assume humbly that we’re confused and don’t always know what we’re doing and we’re staggering and stumbling towards Him, and have some humility in that process. And that means we have to speak up against those who would misuse His name to justify oppression, or violence, or hatred with that fierce certainty. No God condones terror. No grievance justifies the taking of innocent lives, or the oppression of those who are weaker or fewer in number.

2. Uphold the distinction between faith and government, between church and state.

The United States is one of the most religious countries in the world -- far more religious than most Western developed countries. And one of the reasons is that our founders wisely embraced the separation of church and state. Our government does not sponsor a religion, nor does it pressure anyone to practice a particular faith, or any faith at all. And the result is a culture where people of all backgrounds and beliefs can freely and proudly worship, without fear, or coercion.

3. Treat others as we want to be treated.

If there is one law that we can all be most certain of that seems to bind people of all faiths, and people who are still finding their way towards faith but have a sense of ethics and morality in them -- that one law, that Golden Rule that we should treat one another as we wish to be treated. The Torah says “Love thy neighbor as yourself.” In Islam, there is a Hadith that states: "None of you truly believes until he loves for his brother what he loves for himself.” The Holy Bible tells us to “put on love, which binds everything together in perfect harmony.” Put on love. 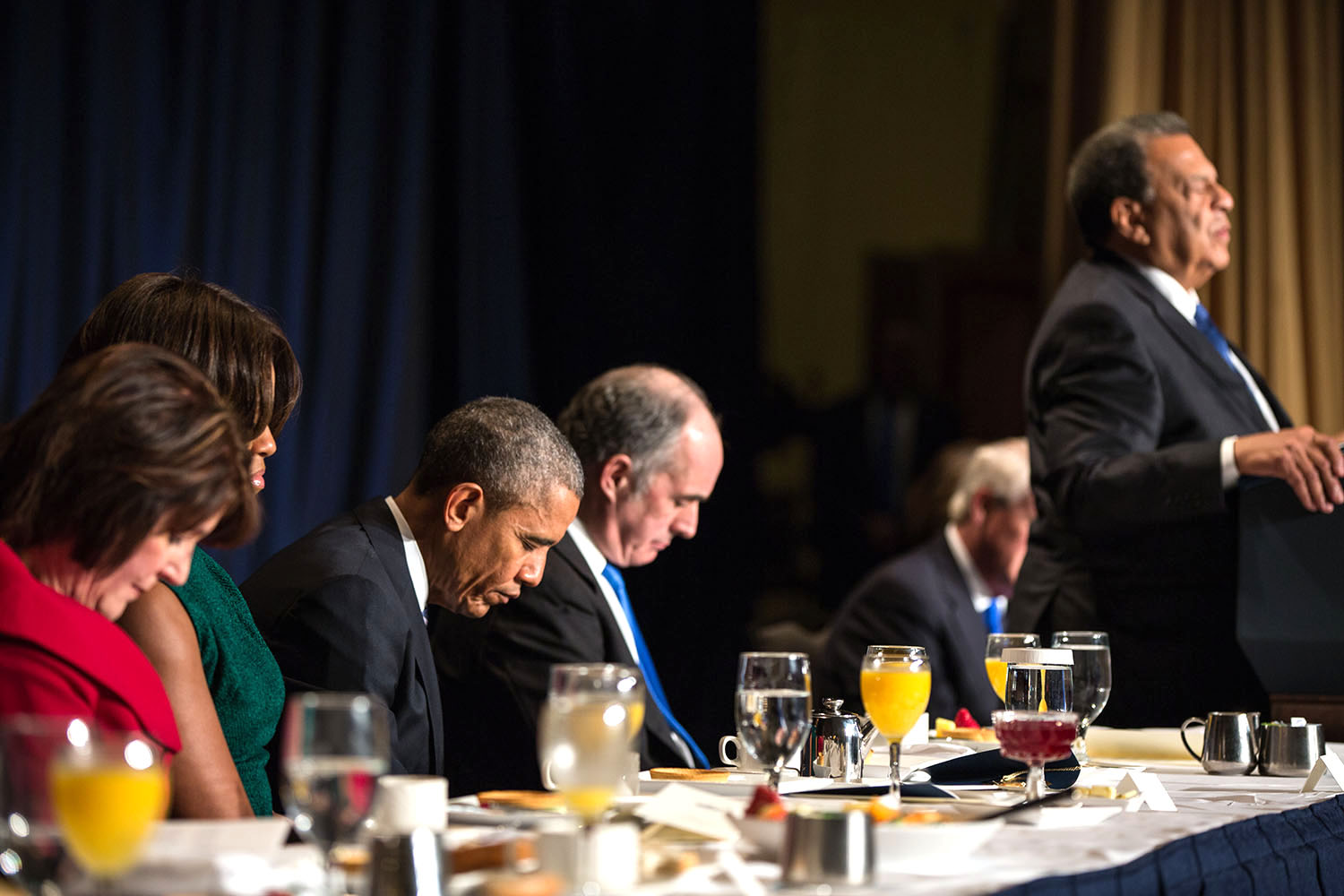