Chart of the Week: Progress in the Battle Against Ebola

February 11, 2015 at 12:59 PM ET by Tanya Somanader
Twitter Facebook Email
Summary:
Thanks to U.S.-led containment efforts, the number of people who are contracting Ebola has declined sharply.

The world is witnessing the worst outbreak of Ebola in history. Since the first cases in March of 2014, there have been more than 22,500 reported cases in West Africa and more than 8,900 people have died from this devastating disease.

As the President has made clear, to effectively protect the American people, we must confront this outbreak at its source. That's why the U.S. has not only launched a government-wide approach to strengthen our preparedness here at home, but is also leading the fight on the frontlines of the epidemic in West Africa.

Thanks to these efforts, and the work of countless others from around the world, the number of people who are contracting Ebola has declined sharply in the last few months. Take a look: 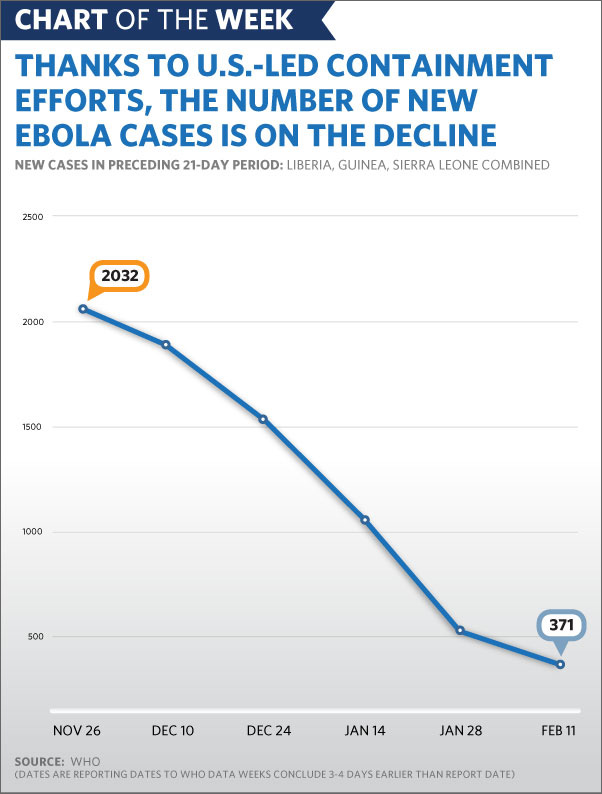 See how integral these health care workers have been in this fight:

The emergency funding the President called for and Congress passed last year has also been a key part of the progress we're seeing. It's helping to mitigate the epidemic abroad, enhance domestic preparedness, speed the procurement and testing of new vaccines and therapeutics, and accelerate the Global Health Security Agenda -- an international coalition of public and private partners dedicated to making the world safe and secure from infectious disease threats and to promoting global health security as an international security priority.

The President's FY2016 budget reflects our country's commitment to leadership in this effort by investing in these critical programs that will not only help contain the spread of Ebola abroad but will help ensure our safety here in the U.S.

"We know how to wage this fight," the President has said. "And if we take the steps that are necessary, if we're guided by the science -- the facts, not fear -- than I am absolutely confident that we can prevent a serious outbreak here in the United States, and we can continue to lead the world in this urgent effort."

Notwithstanding the progress, the battle against Ebola will not be over until there are no cases left – we must get to zero Ebola. That is why the President has directed that the US “whole of government” response continue with focus and intensity even though the number of cases is down dramatically. The progress made should be a source of pride to the American people -- but the work is far from over.

Learn more about our government-wide response to contain and eliminate the Ebola epidemic: obamawhitehouse.archives.gov/ebola-response.