Welcome Home: How the U.S. Is Reducing Wait Times for International Travelers

February 13, 2015 at 11:05 AM ET by Valerie Jarrett, Jeffrey Zients
Twitter Facebook Email
Summary:
Today, the Obama Administration announced that 17 of the nation’s largest airports will be partnering with private industry, to simplify and streamline the entry process at the nation’s top airports while also strengthening security.

Are you planning a trip abroad? If so, your return trip to the U.S. will soon be a much more efficient, welcoming experience. 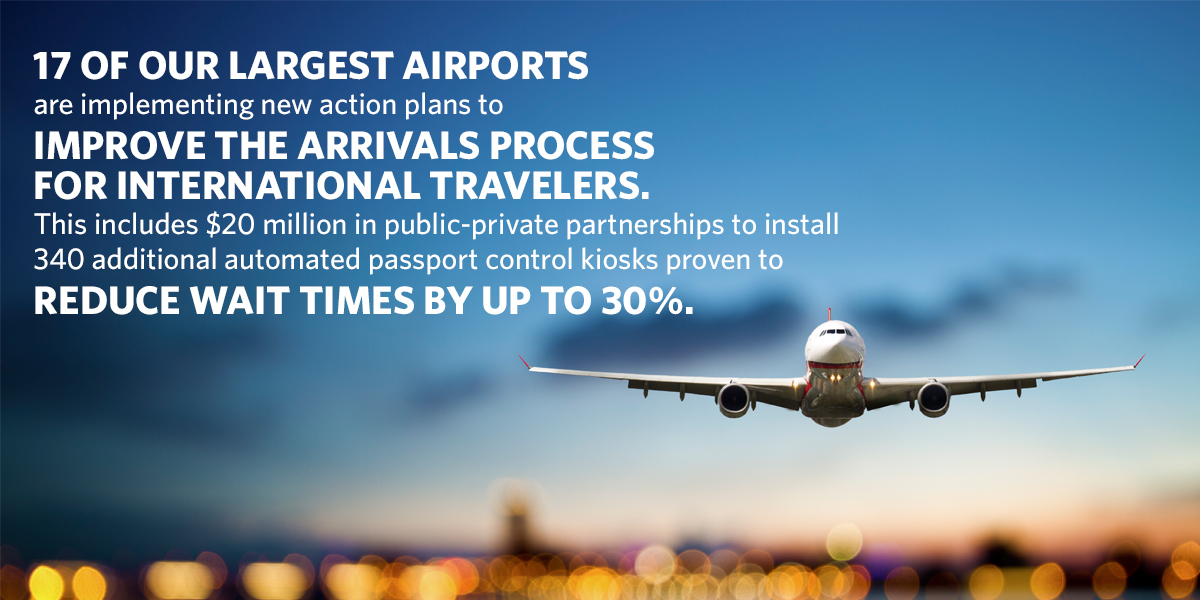 Today, the Obama Administration announced that 17 of the nation’s largest airports will be partnering with industry, to simplify and streamline the entry process at the nation’s top airports while also increasing security.

For example, 13 U.S. airports are installing 340 additional automated passport control kiosks. These kiosks will expedite air passenger inspection for U.S. and Canadian citizens, U.S. Lawful Permanent Residents, and certain other travelers. Modern touch screen technology allows passengers to scan their passports and enter their customs declaration information, rather than waiting in line to provide that information to customs officials, reducing officer interaction time by 45 percent doing so, they reduce the overall waiting time of all arriving travelers. At the same time, they increase security by allowing Custom and Border Patrol officers to focus on the passenger instead of administrative tasks.

This will reduce office interaction time by 45%, while increasing security.

We are committed to continuing to improve the arrivals process for travelers from all around the world, as tourism is America’s largest services export and international visitors have created roughly 280,000 American jobs over the past five years.

International visitors have created roughly 280,000 jobs over the past five years.

Recognizing the tremendous potential of this sector of the economy, the President launched a National Travel and Tourism Strategy in 2012 with an ambitious goal of attracting and welcoming 100 million international visitors annually by the end of 2021. Three years later, we are on track to meet this goal and in fact have seen the number of international visitors grow from 55 million in 2009 to an estimated 74 million in 2014. Now, we are upping our game trying to keep these visitors coming back, while making it easier for you to return from international travel as well.